» Resources » What is a Jain manuscript?

What is a Jain manuscript?

The Jain community has a long tradition of scholarship and it has made significant contributions to Indian classical and popular literature. Jains have written on many non-Jain subjects so what is considered a ‘Jain manuscript’ must be defined.

Typical features of Jain manuscripts are outlined, such as the format and material, including the inks used.

The method of writing on the manuscript and which scripts are frequently used are also important.

All Jain manuscripts have been created in the Indian subcontinent.

The majority of Jain manuscripts are handwritten copies of texts belonging to the Jain tradition.

Many other Jain manuscripts are handwritten documents on which a Jain scribe or author has copied or commented on a text belonging to the wider Indian heritage.

For instance, over the centuries several Jain monks have written well-known commentaries on classics of Sanskrit literature such as the works of Kālidāsa. Manuscripts of these commentaries are found in Jain libraries. Jain scholars have also read and commented upon Buddhist philosophical works and thus they are considered to belong to the Jain heritage as well.

Changes in technology and available materials over time have altered the format that Jain manuscripts take. Manuscripts take a traditional ‘landscape’ shape, in which the page is a rectangle with short sides on the right and left. This comes from the material on which the first texts were written.

A traditional manuscript is made up of loose folios or sheets of paper or other material.

First the reader reads the recto and then turns the folio over to read the verso side.

When folios are numbered, the number is generally found on the verso side, at the bottom of the right-hand margin.

A book is bound, which means it has a spine into with the pages are glued or stitched so a reader can easily turn over the pages. A traditional manuscript is unbound but sometimes it has a manuscript cover.

A manuscript cover has two parts. One is at the beginning, the other at the end. They are made of paper, cloth, cardboard or wood. They can be decorated and painted.

Not all manuscripts have a manuscript cover but in modern times at least a minimal paper cover has been added to most manuscripts. In well-equipped libraries, such as the British Library, glass or elaborate boxes are used to protect the documents in the best possible way.

Jain works printed in India often use the traditional format of unbound manuscripts. They are known as pothī.

From the 18th century onwards Jain manuscripts produced in northern India sometimes took the book format typical in the West. However, it was not very common.

Today Jain texts are commonly printed in the bound-book form which is more familiar to us.

Two materials are normally used for Jain manuscripts – palm leaf and paper. Cloth was used for items such as large paintings or covers.

Long, slim leaves from palm trees provided a smooth writing surface that was readily available. Early scribes wrote on both sides of the leaf so numbering the pages was important. One or more holes were cut in each leaf so that strings could tie together all the pages of a text in the right order.

As paper became more common in the late medieval period, it tended to replace palm leaf as the favoured material for copying texts. But paper manuscripts kept the style and format developed to work with early materials.

This is the standard material for manuscripts created in south India, where the trees that provide the leaves are common. These trees are Corypha umbraculifera and Borassus flabellifer. After they have been treated, the leaves are smooth and can absorb ink.

In western India, such as Gujarat and Rajasthan, palm leaf is used in manuscripts dating from the 12th to 14th centuries.

The format of palm-leaf manuscripts is striking. The folios are long and narrow, usually 20 to 50 centimetres long and from 3 to 5 centimetres wide. In the centre there is a hole into which a cord or string is inserted. The cord is used to keep all the folios together.

Manufactured paper entered India in the 13th century along with the Muslim. It was made of vegetable fibres from cotton, wood, bamboo and so on.

Paper became the regular material used for Jain manuscripts from western India from the 14th century onwards. It demonstrates a large range of colours – cream, yellow, ochre, light brown and grey – but not the white of contemporary paper.

Earlier paper manuscripts are sometimes long and narrow like their palm-leaf predecessors, but later on they tended to become broader. The standard size is 26 by 11 centimetres but there are many variations.

The traditional paper is often brittle by now if it has not been preserved properly.

In the 19th and 20th centuries European paper was sometimes used in manuscript copies that were prepared in India at the request of Western scholars. 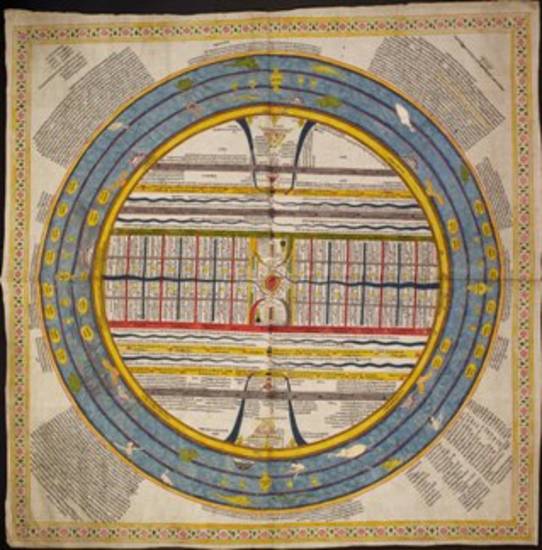 Cloth was normally not used for continuous ordinary texts, but rather for large-size paintings like those representing the Jain world. It was also used for book covers and manuscript covers.

The various colours of ink used in Jain manuscripts were those used in Indian manuscripts in general. The inks were all from natural sources.

The normal colour used for writing a text was black.

Red ink was used for ornamentation in the widest sense of the word or simply in order to emphasise some element of the writing, such as the number or a particular sentence.

These elements were also often written in black emphasised with red powder.

Some ornamented manuscripts use silver and gold inks, for example copies of the Kalpa-sūtra.

Yellow or white pigments were used as erasers.

A metallic tool was used to incise palm leaves. Then ink was painted on to the incisions so that the letters stand out.

A kind of pen is used to write on paper manuscripts.

Most Jain manuscripts were written in Indian scripts although a few used scripts from non-Indian civilisations.

The native scripts used in Jain manuscripts are read from left to right.

Common scripts are various forms of Devanāgarī and scripts from south India.

In Devanāgarī each letter has a horizontal line above it. There are distinctive features in the manuscripts produced by Jains so the name ‘Jain Nāgarī’ has been given to this style.

A reader of Devanāgarī manuscripts will be able to follow manuscripts in Jain Nāgarī. However, some letters and numbers have a specific form.

The south Indian scripts of Tamil and Kannara are easily recognisable from their more rounded shapes.

In practice, this means the Persian script and language. These are seen in a very small number of manuscripts, where a Jain work in an Indian language such as Prakrit or Sanskrit is followed by its rendering in Persian.

Calligraphy in the strict sense of the term is not a part of the Jain or Indian manuscript tradition as it is in the Arab, Chinese or Japanese cultures.

However, there are instances of something that comes close to calligraphy. This can be seen in some of the Kalpa-sūtra manuscripts. There the script can be large and extremely well-formed in a way that distinguishes it from ordinary handwriting.