How did Jain manuscripts end up in the UK?

From the first time Europeans journeyed to India in the 16th century, manuscripts attracted their interest whether they were travellers, curious minds or scholars. Manuscripts – handwritten documents – were the first media transmitting the knowledge, laws, literature and religious traditions of Indian people and thus have always been an invaluable source of information. European travellers started acquiring these manuscripts, through donations or purchases, mostly for the royal libraries in their countries of origin.

Under British colonial rule the search for manuscripts became well organised, and included Jain manuscripts, particularly in the 19th century. A large number of Jain manuscripts were collected, stored and catalogued for government libraries in India. Others were sent to libraries in the West. Others are still owned by the Jain temple libraries. Wherever they are, they form part of the global cultural heritage, which needs preservation for future generations.

How are the manuscripts ‘digitised’?

The Jain manuscripts on JAINpedia have been photographed with very high-quality digital equipment to archival standard. The partner institutions are all actively digitising their collections and produced the original digital files.

The digital files have been processed to produce the JPEG2000 images on the website. This enables website viewers to zoom in to each picture and see details in great close up. You can see where the text has been painted over, individual brushstrokes in the paintings and imperfections in the paper.

Why have scholars working in the West written the encyclopaedia articles?

During the colonial period in particular, many Europeans who lived in India became interested in historical and contemporary Indian life but the formal academic study of Jainism began in Western universities in the 19th century. This formed part of the increasing scholarly concern with the ancient cultures and, later, the contemporary society of India. In many cases, early scholars founded university departments that examined Jainism alongside other Indian topics. The encyclopaedia articles in JAINpedia build on this long tradition of Western scholarship.

The depth of knowledge of many Jain monks and nuns in India is indisputable and scholars all over the world benefit from it as well. The academic approach, however, is not always pursued by practising mendicants, who naturally approach their faith in a very different way. As scholarly methods have spread around the world, many Jain monks and nuns have combined both techniques to great effect. Among many, eminent examples include:

JAINpedia would be happy if learned ascetics became directly involved in the project. The plan is for a variety of contributors to write articles for the encyclopaedia themes. Scholarly credentials are the most important qualification to write the kind of in-depth piece JAINpedia contains.

Why is there more Śvetāmbara than Digambara material in JAINpedia? 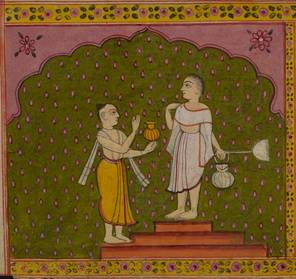 JAINpedia’s starting point has been to digitise manuscripts from our partner institutions. Under colonial rule, the sect of Digambara Jains was not prominent in Indian society, which explains why Europeans mostly came into contact with Śvetāmbara Jains from western India. When Jain manuscripts were systematically collected in the 19th century there was more Śvetāmbara material available, resulting in its stronger presence in European libraries.

This is not to say that Digambara manuscripts are totally absent from the West. For example the Strasbourg University Library in France holds a notable Digambara collection. The British Library contains some as well, especially items from South India in Kannada or Tamil. These are still in need of investigation, however.

If you want to look at nicely illustrated manuscripts produced among the Digambaras of north India, please see the Ādityavāra-vrata-kathā of the British Library, or the Jasahara-cariu of the Wellcome Trust.

In addition, we hope to be soon in a position to show a significant group of Digambara manuscripts that have been scanned in India. This will greatly enhance and balance what is available at present.

How do I link to JAINpedia?

We are happy that you want to provide a link to JAINpedia on your website. Full information about linking to JAINpedia can be found on the Copyright page in the About JAINpedia section.