In the spring of 2013, the Science Section at the Victoria and Albert Museum (V&A) carried out a short project on the pigments used in paintings in Jain manuscripts held in the institution.

Pigments are substances used to produce colours in art and are normally powders that are mixed with a binding medium, such as water or oil, to create paints the artist can use. Jain manuscripts of certain texts are noted for their heavy use of colourful illustrations, because the items themselves are considered precious and are sometimes even treated as sacred objects worthy of worship. Pigments are also often used in manuscript text, for example to mark verse divisions, for emphasis or punctuation.

Before the advent of artificial colouring agents, many traditional pigments were derived from animal or insect products. A well-known example is carmine, a bright red material made from boiled cochineal beetles. The Jain doctrine of non-violence means that, in principle, only pigments produced from plants or minerals should be used in Jain art. Jain manuscripts also frequently use precious materials in their miniature paintings, such as gold or lapis lazuli.

The V&A team used several scientific methods to examine a selection of folios from Jain and Hindu manuscripts. As well as spectroscopic techniques of different kinds, these methods included optical microscopes to reveal information that the naked eye cannot see. The project discovered that the pigments used remained largely traditional, although the artistic styles developed. Even so, later on some colours were obtained using more modern pigments. The comparison with Hindu manuscripts also brought to light some differences.

What was the goal?

Twenty-one folios from a number of Jain and Hindu manuscripts in the Victoria & Albert Museum collections were analysed using non-destructive scientific techniques. The aim was to find out: 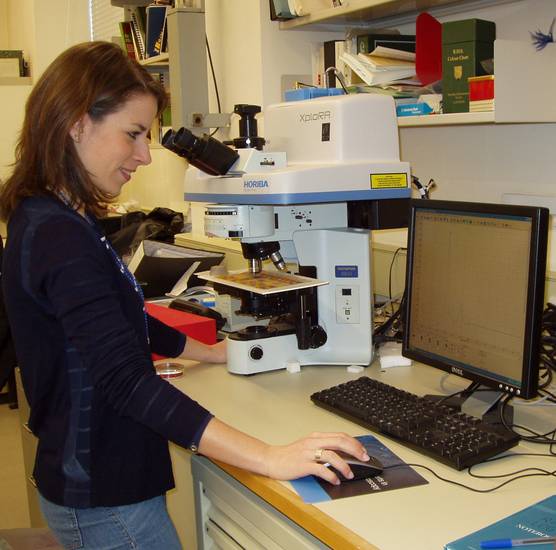 The procedures used to reach these goals ranged from standard microscopy to ultraviolet imaging. Certain characteristics of the manuscripts are invisible to the human eye but modern analysis techniques can discover what lies hidden in the material of an artefact. These can point to the item’s Provenance, age and other information that may be very difficult to find out without complete documentary records.

The V&A team which undertook the analysis of these manuscripts included Bhavesh Shah, who led the XRF analysis, Lucia Burgio, senior scientist, and the curator Nick Barnard. The Raman and optical microscopy analyses were carried out by Silvia Amato, a visiting scientist on a post-graduate traineeship. 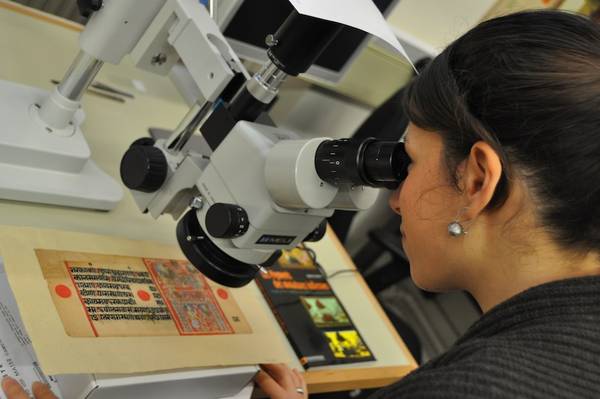 Each folio was initially examined with a stereo microscope, which uses visible – or normal – light and powerful lenses to look at the item. This enabled the microscopic details of the painted surface to be observed.

The team recorded information about the appearance of pigments and other materials used in the manuscript.

Then a digital camera photographed the pigments, inks and decorated surfaces in extreme close up.

The information about pigments and materials, and the photographs provided extensive documentation for each folio.

Pigments and dyes on the surface of each folio were subsequently analysed by Raman microscopy. This cutting-edge spectroscopic technique provides a characteristic spectrum that reflects the molecular composition of the material under study. This allows the material to be clearly identified through its ‘Raman fingerprint’.

Raman is particularly suited to the study of pigments of works of art because it: 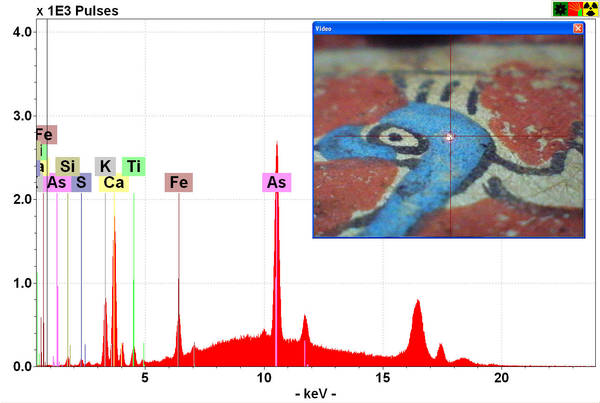 The manuscripts were also studied using X-ray fluorescence (XRF). This technique detects and identifies most chemical elements in the objects being studied.

Knowing the composition of a material used in a painting helps to identify what pigment was used.

XRF is a very useful tool in cultural heritage thanks to its non-invasiveness and rapid results. 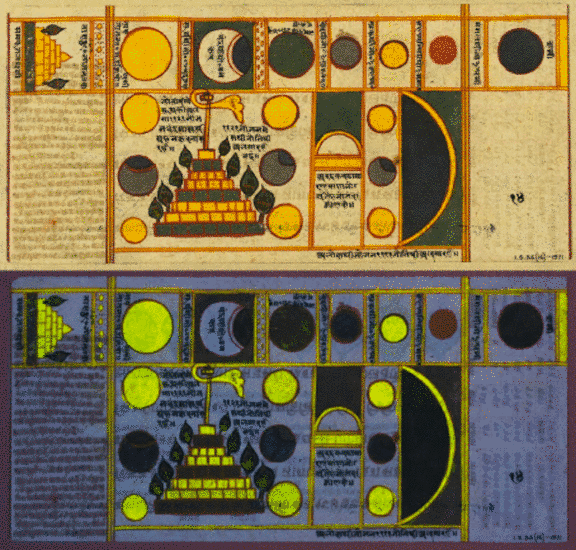 Materials that seem to be the same colour in normal, visible light may respond differently when examined under ultraviolet (UV) light because of their different chemical composition.

Six folios were examined under UV light to check their appearance under such conditions.

What were the results?

These insights into Jain manuscript art come from the results of the scientific analysis and the expertise of the V&A curators and conservators. 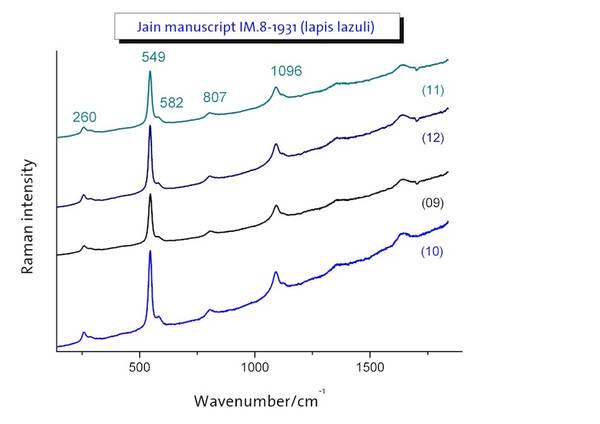 In Jain manuscripts, traditional materials remained largely favoured over the three centuries covered in this study, even though some colours were later produced by using different pigments.

Traditional pigments were used quite consistently over this time period, despite any stylistic differences shown by the miniatures. Examples of these traditional materials include:

The investigation could not identify a few of the artists’ materials on the folios, such as an organic red and a green that contained copper. However, partial information on their composition was obtained.

On the other hand, over time Jain artists used different materials to achieve the same hues. For example, the early paintings show that orpiment was usual, while Indian yellow and a pale yellow dye were found in the more recent ones. Similarly, a white pigment containing calcium was common in early examples but in the later folios was replaced with either lead white alone or combined with tin white. In the later manuscripts, red lead was used, in addition to vermilion and a red organic dye, for pink, purple and brown shades.

These differences in the use of pigments may be due to various factors, such as:

Additional factors to be considered are the intentions and wealth of the Sponsor of the manuscript. For example, these individuals may have specified certain expensive raw materials, resulting in very lavish manuscript art. Conversely, a plainer manuscript may have been produced when particular instructions were not given.

Some differences between the two classes are evident in both the range of colours and the artistic styles.

The 15th and 16th centuries

The manuscripts from this period show a rather simple Palette, in which gold, vermilion, carbon black and lapis lazuli are most commonly used. The use of green and white pigments is generally limited to small details on the folios.

The widespread use of precious materials, such as gold for the figures and text, and lapis lazuli for the background, is among stylistic innovations introduced in the mid-15th century. These arose partly as a result of contact between the Jain artistic tradition and the Islamicate cultures of Iran, Egypt and elsewhere.

The 17th and 18th centuries

The folios exhibit a wide variety of colours obtained by mixing various materials, for example a:

While gold was used on the older manuscripts, the later pages contain powdered metallic tin, which imitates silver.

Although only one Hindu folio was analysed, a few preliminary observations and comparisons with the Jain folios can be made.

In the painting the pigment lapis lazuli is not used, unlike the Jain manuscripts where it is widespread.

The pigments used to paint the Hindu illumination appear to be less concentrated and have a lower covering power compared with the Jain folios analysed.

More Hindu pages will be examined in the near future and a more conclusive comparison will then be completed.