» Invitation to a monk
Browse All Manuscripts 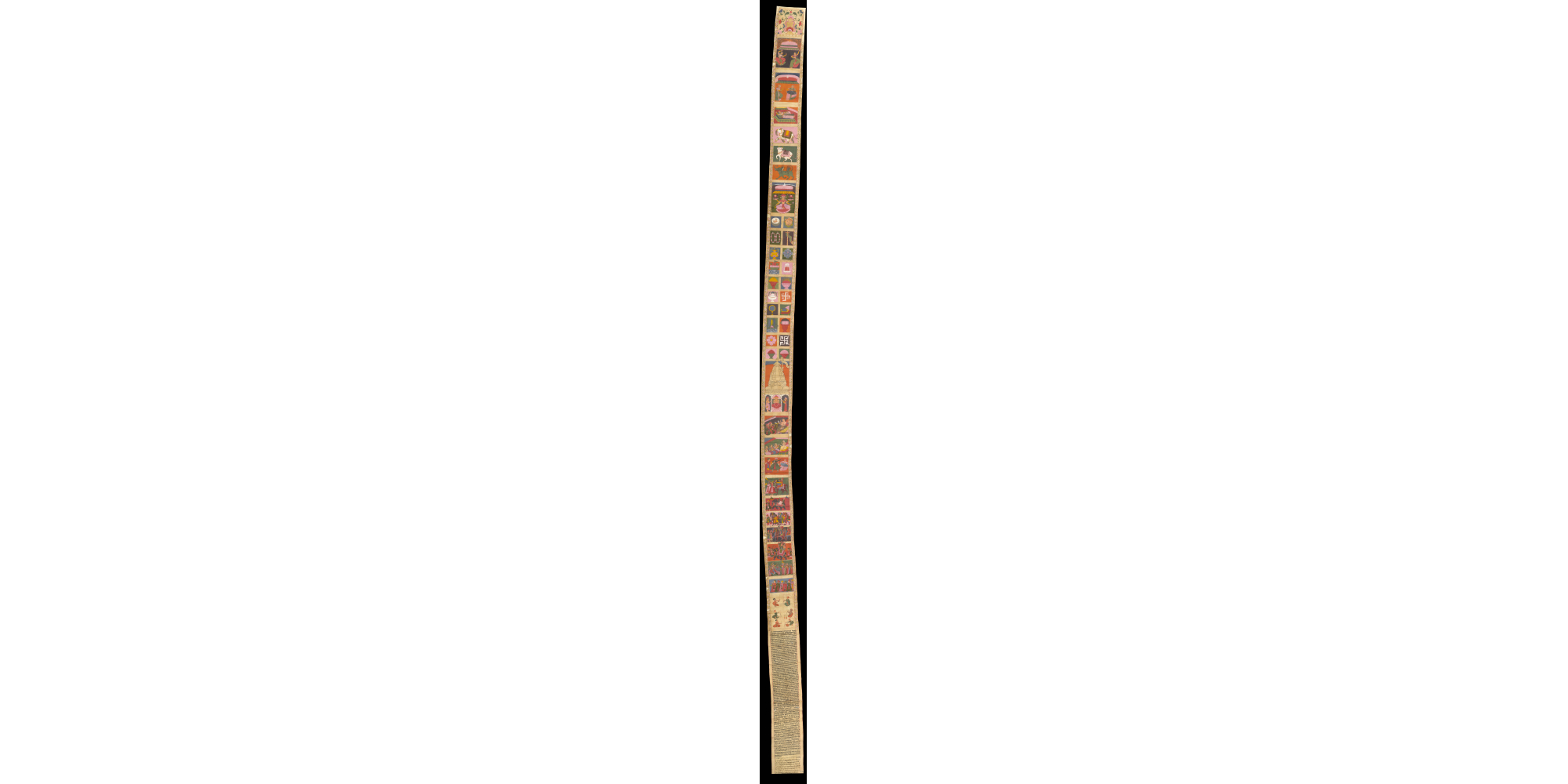 This is an invitation scroll – vijñapti-patra – used in the Jain context. It is a formal letter of request from a particular lay community inviting a Jain teacher and his companions to their village or area. The lay people usually invite the group to come for the rainy season, when the monks and nuns have to stay in one place. This letter – kāgala orlekhaṇa – was sent some time between 1744 CE and 1801 of the Vikrama era by the community of Sirohi, near Abu in Rajasthan. The lay people invite the monk Jinabhakti-sūri of the Kharatara-gaccha, who is currently in Radhanpur in north Gujarat.

In its full form such a letter represents a skilful combination of generally splendid paintings with ornate descriptions or poems of praise. It might happen that different Jain communities compete to invite the same monk. Only the most convincing letter would be rewarded by his agreement. Thus a vijñapti-patra uses rhetorical patterns and embellishments in a highly formalised manner, for it is a literary genre with well-recognised features.

The paintings, which come first as the scroll is unrolled, are generally either religious and non-religious scenes. Both kinds are in this British Library document. They are visual representations of auspiciousness, wealth and joy.

Around 100 lines long, the text is written in formal script and style, with Sanskrit, Prakrit and Gujarati found alternately or side by side. Lengthy prose developments unfold all the qualities of a Jain teacher.

Besides such descriptions, the letters of invitation generally include one or several verse compositions. In this example, there is only one. Its purpose is to praise the teacher but also to express the devotion and nostalgic affection of the senders, using bhakti terminology and imagery.

The final part of the text, which has only 25 lines here, is written in cursive Rajasthani script and language. It lists the names and castes of the members of the lay community who present the request.

As in many Indian epigraphical documents, the literary part is in Sanskrit and the performative or practical part in the local language of the region.

The vogue for writing such letters of invitation to Jain monks dates from the late medieval period to the  end of the 19th century. It is geographically restricted to Rajasthan and Gujarat in western India. Examplesknown so far mostly concern monks from the Tapā-gaccha and from the Kharatara-gaccha mendicant orders. The latter, however, are less numerous.

An important stronghold of Jainism and a centre of political power and business, Sirohi is famous as a brilliant artistic centre. This invitation scroll is one of several known so far to have come from this place.

Jinabhakti-sūri, the teacher named in the London document, is probably the 66th or 67th pontiff of the Kharatara-gaccha. Born in V.S. 1770, he had a short life, being initiated into the order in V.S. 1779, becoming sūri in V.S. 1780 and dying in V.S. 1804 in Mandvi. A short poem in Gujarati dedicated to him as the Kharataragaccha nāyaka was written by someone called Dharmasī in V.S. 1799. Published in 1994, the poem is accompanied by a painting of the pontiff from a private collection.

Such invitation scrolls are rare in public institutions outside India, although they have recently entered the art market in increasing numbers. This is one more element which makes the London document very valuable.

Invitation to a monk