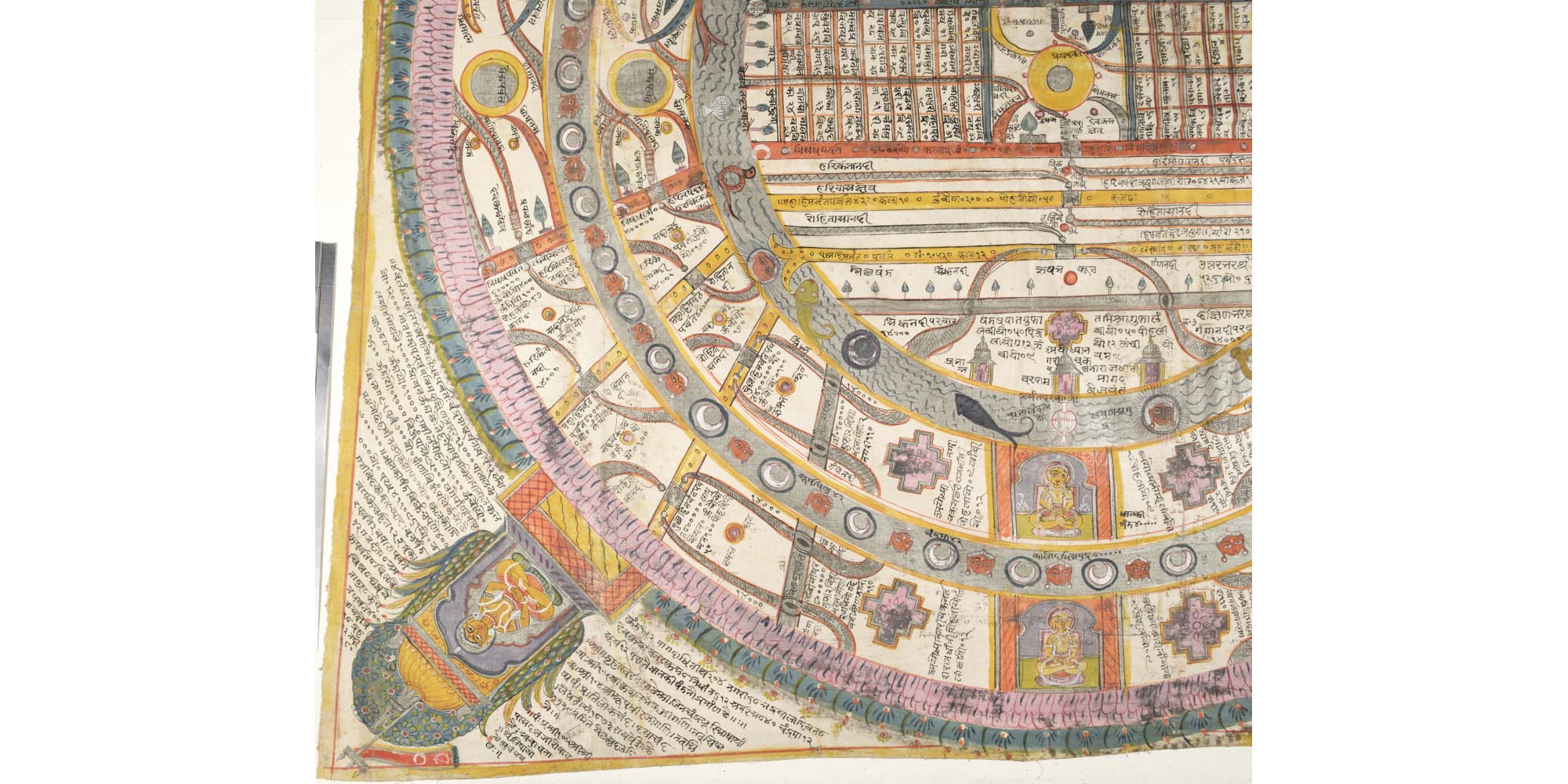 The Two and A Half Continents is formed of concentric rings of differing size. Every other ring is a continent, which is surrounded by a ring of ocean. Moving from the centre outwards, the order is as follows:

Mount Meru is the centre of the universe in Jain cosmology, at the heart of the central continent of Jambū-dvīpa. Jambū is where human beings live and is in the Middle World, one of the three worlds of traditional Jain cosmology.

Jains cannot advance spiritually without understanding and meditating upon cosmological theories so understanding them is crucial. Certain key religious concepts run through these theories. These include the notion of a physical soul shedding karma by moving through the cycle of rebirth to eventual omniscience and final liberation, along with the cyclical nature of time, the interconnectedness of the universe, and the importance of symmetry, repetition and balance.

In the bottom-left corner, the text on the right side of the temple with a Jina, provides information that is found in the colophons of manuscripts. The first few lines are additional detail about the Jain universe, provided on the description tab.

From line 4 onwards, it gives the date and the name of the person who wrote, and perhaps painted, the object and of the owner.

This is the painted cloth of Pandit Pāsadatta. It was created for him to read. May there be auspiciousness!

The language is Sanskrit, mixed with Rajasthani. The words rā and ro mean ‘of’ in this language.

The numbers 105 and 104 accompanying the honorific title śrī, which is used with the proper name of a religious teacher, are auspicious. The number 108 may also be used in the same way.

The Br̥hat-Kharatara-gaccha is one of the main Śvetāmbara monastic orders. Arising in the 12th century, this sect is active today and is largely represented in Rajasthan or Gujarat.

In the long history of this monastic order there have been several heads with the name Jinacandra-sūri. This one is probably the Jinacandra-sūri who was born in 1752 and died in 1799 (1809–1856 of the Vikrama era). Thus he had died before this aḍhāī-dvīpa was made.

The date is expressed according to the traditional Indian calendar. Here the year is indicated in two different eras, namely the:

The word pāṭa is the technical name for paintings on cloth or paper that are meant to be rolled so they can be carried.

The final phrase is customary at the end of manuscripts.

The British Library Board Add. Or. 1814 unknown 19th century

Two and A Half Continents and numerical information