The Royal Asiatic Society is a scholarly body in London, which was set up in 1823 to further the study of Asia. Since its foundation, the society has played a critical role in expanding and deepening the understanding of Asia through its publications, lectures and events. The Royal Asiatic Society (RAS) also has collections of important items from all over Asia, especially South Asia, which were mainly acquired in the 19th century.

The RAS holds a small but significant collection of Jain objects. Some of the Jain treasures in the collections are available on JAINpedia, and include:

The diagram is a kind of maṇḍala or yantra, which both mendicants and lay people use in meditation and worship. This item is a rare and valuable sūri-mantra-paṭa, which only Śvetāmbara monks use, and is also one of the earliest surviving examples. It is also interesting because, during the conservation process for the yantra, two smaller uninscribed diagrams were found in different layers of the fabric. This unusual sūri-mantra-paṭa is a highlight of JAINpedia.

The oldest institution in the UK devoted to a deeper understanding of Asia, the Royal Asiatic Society was established amid growing interest among 19th-century Europeans in the cultures of Asia. The RAS has a respected history of intellectual engagement with all parts of Asia, particularly the Indian subcontinent. This tradition continues today with publications, projects and events, which are open to everyone who is interested in Asia, not just professional academics. 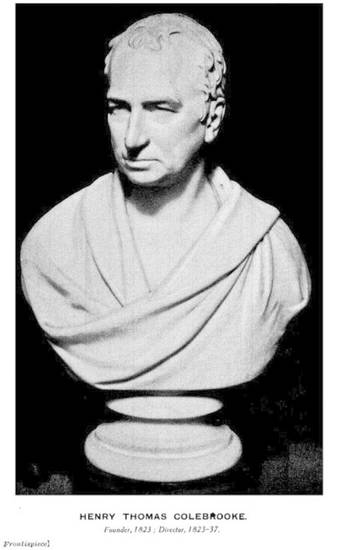 The Royal Asiatic Society was the first British organisation dedicated to the study of Asia. It was founded at a time when Europeans were beginning to learn Asian languages in a systematic way, gaining a real knowledge of Asian cultures, history and religions. The society was instrumental in encouraging an exchange and transfer of cultural understanding, a process which is still ongoing today. In Britain it was at the heart of that process, fulfilling a national role in Asian studies, and it collaborated with organisations and scholars worldwide.

The society was founded in 1823 by the eminent Sanskrit scholar Henry Thomas Colebrooke ‘for the investigation of subjects connected with and for the encouragement of science, literature and the arts in relation to Asia’. Many distinguished scholars have been associated with its work, including:

Today the Royal Asiatic Society provides a forum, independent of government, in which professional scholars join those with a general interest in Asia. To fulfil its aims the RAS:

All activities and access to the library are free of charge to the general public.

Collections of the RAS 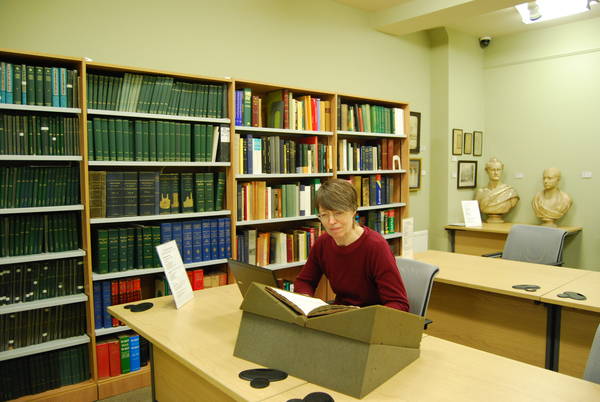 Although the collections of the Royal Asiatic Society feature numerous items originating in the Indian subcontinent, the society’s holdings comprise items from across Asia. The RAS holds a small yet valuable collection of Jain artefacts, which consists of works of art as well as manuscripts. Several of these pieces are very rare outside India.

Most of the unique material in the RAS library – such as manuscripts, paintings and drawings, and photographs – was donated during the early to mid-19th century. In its early days the society built up a museum, which included some beautiful and rare objects, such as a jade cup owned by the Mughal Emperor Jahangir. Later the museum objects were disposed of, mainly to the Victoria and Albert Museum and the British Museum. However, the society has retained its other collections. The society has never purchased material other than books, so its collections have developed from the generosity of many donors.

The library collections include:

As a result of the long British association with India, the library collections relating to South Asia are particularly strong.

Of these, three items are available as digitised images on JAINpedia. 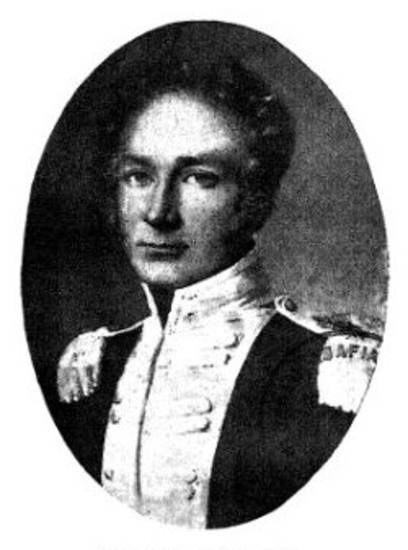 Most of the Jain works at the Royal Asiatic Society are in the Tod Collection. Out of the 190 manuscripts in the collection, 36 relate to Jainism. Some manuscripts contain copies of several different texts, so the collection is made up of nearly 60 individual Jain texts. Of these the most significant is a copy of part of the Kalpa-sūtra with the Kālakācārya-kathā, under the shelfmark Tod MS 34. The text appears to have been copied in VS 1461 (1404 CE), making it a very early copy, and it has several exquisite coloured illustrations.

The collection is named after its original owner, James Tod (1782–1835), who was a well-known soldier and administrator in British India. He served as the East India Company’s political agent to the western Rajputana states in the early 19th century, and while working there he undertook extensive research on Rajput history. Tod later published this research as his exhaustive two-volume work Annals and Antiquities of Rajasthan (1829/32).

On his return from India Tod was appointed the first Librarian of the newly formed Royal Asiatic Society. He gave the society four large collections of manuscripts, coins, miniature paintings and topographical drawings. Some of the manuscripts were presented to Tod by local rulers, such as Maharana Bhim Singh of Mewar. Many others were copied for him on the orders of rulers of various Rajput states who knew of Tod’s keen interest in Rajput history. 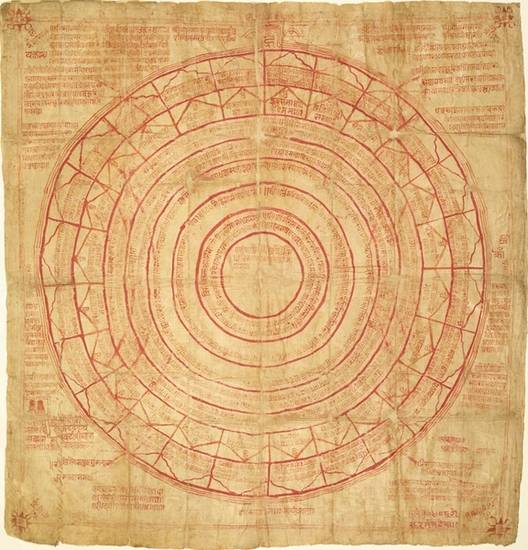 The Royal Asiatic Society holds two Jain-related paintings on cloth – a rare yantra or meditation diagram and a cosmological map.

The first cloth painting is a meditation diagram, of a type known as sūri-mantra-paṭa. It was intended for use by members of the Kharatara-gaccha sect.The diagram consists of concentric circles within which are formulas of homage to various deities, types of Jain monks, sacred knowledge and so on, along with magical syllables. If the date on the piece is correct, it was created in 1449 CE, around the time the Kharatara-gaccha was flourishing particularly in Rajasthan. This type of diagram is hardly ever found outside India and it is a particularly early example, making this an exceptionally rare and interesting piece.

The provenance of the yantra is not clear cut. It was found among the papers of Sir Henry Miers Elliott (1808–1853), a civil servant and historian. Miers Elliott worked for the East India Company in various parts of the subcontinent and was interested in Indian culture and history. He died at the Cape of Good Hope on the way home from India and his manuscripts and papers were passed on to various scholars. It seems likely that one of them gave some material to the RAS, including this yantra, although there is no record of the donation.

During the conservation process undertaken for JAINpedia digitisation, two further diagrams were revealed on the back of the yantra’s fabric. They are small labyrinth-shaped squares without any text inscribed.

The other painting on cloth is a map of part of the Jain universe, known as an aḍhāī-dvīpa – Two and A Half Continents – which is an artwork depicting Jain cosmography. It represents in the form of concentric circles three areas of land with two oceans in between. These areas of land represent the realm of human beings, and the diagrams include many details of specific rivers and mountains found on the continents. This painting is of particular interest because it includes information about:

The aḍhāī-dvīpa was presented to the RAS by Major General William Miles on 17 June 1837. It had been given to him ‘by a Jain priest of the Province of Marwar’. Miles was the author of an article called ‘On the Jains of Gujerat and Marwar’, published in the Transactions of the Royal Asiatic Society in 1835. 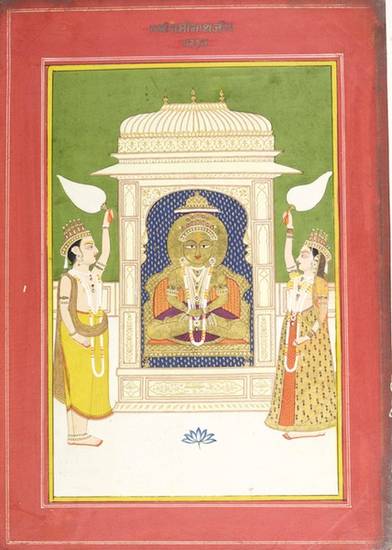 Comprising painted works of art, the Baxter Collection at the Royal Asiatic Society contains 19 examples of Jain religious art. The 24 Jinas are frequently portrayed in art and can usually be identified only from their personal emblems.

Born in 1793 in Calcutta, Nadir Baxter was the son of a British merchant and his wife. He grew up in India and came to England in 1825. Shortly after his arrival, Baxter donated to the Royal Asiatic Society 47 Indian miniature paintings dating from the early 19th century. The Baxter Collection comprises:

There is no information about the provenance of the artworks.

The Jinas represented in the paintings are given in the table. The Sanskrit term nātha means ‘Lord’ and is usually shortened to nath in modern Indian languages. It is added to the end of a person’s name and is frequently used for deities.

The life and career of Henry Thomas Colebrooke (1765—1837), a British administrator in India, is summed up in volume 11 of the Dictionary of National Biography, 1885—1900. An accomplished scholar of Sanskrit and of Hindu literature, Colebrooke was one of the founders of the Royal Asiatic Society. His intellectual interests were extremely wide, covering mathematics, science, law, languages and religion.