Pārśvanātha or Lord Pārśva is the 23rd of the 24 Jinas of the present cycle of time.

This piece is a summary of the article "Pārśva". The full article will be available soon. 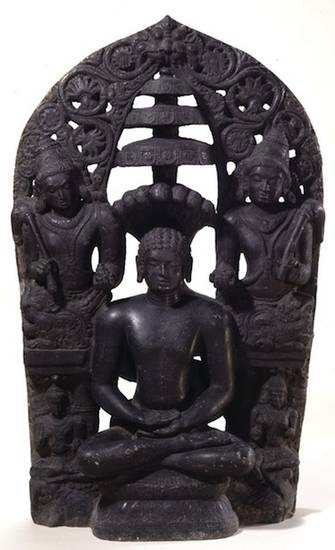 There is some historical evidence of the existence of Pārśva, mainly in Buddhist texts. He probably lived from around 950 to 850 BCE, which is around a century later than his traditional dates. He is credited with founding the fourfold community of lay men, lay women, monks and nuns and with setting out four vows for devout Jains to take.

Tradition holds that he was born in Kāśī and achieved liberation on Mount Sammeta, also known as Pārasnātha Hill.

Pārśva’s symbolic colour is green and his emblem is a snake.

Like all Jinas, Pārśva has a pair of spiritual attendants, often shown in art. His yakṣa is Pārśva to the sect of the Digambaras and Pārśva or Dharaṇendra to Śvetāmbaras. His yakṣī is Padmāvatī, who is also a powerful goddess in her own right. 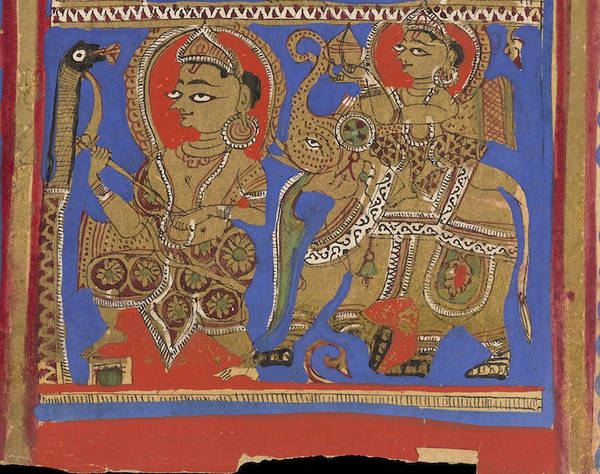 Artwork of the Jinas normally has no obvious identifying marks except for representations of Pārśvanātha or Lord Pārśva. He is usually shown with a snake headdress, which highlights his close association with snakes – nāgas. Snakes appear several times in the life story of Pārśva, the only example of an animal featuring in the history of any of the 24 Jinas. He is also often pictured with green skin.

In the 12th century the Śvetāmbara monk Hemacandra tells the story of how the 23rd Jina became for ever associated with snakes.

One day, [Prince] Pārśva is in his palace and sees crowds of people hurrying along with flowers. On asking why, he is told that they are going to worship the ascetic Kamaṭha, who has recently come to town. He decides to go too.

[Thanks to his advanced spirituality, which gives him great knowledge,] Pārśva knows that a snake is hiding inside one of the logs being added to one of the fires. He orders a servant to take out this piece of wood and to split it carefully. A large snake slithers out, half-burnt but alive.

Image of a Jina, probably Pārśva