The Pūrvas form a type of scripture, which Jains believe predates the surviving holy texts. Recording the teachings of the 24th Jina Mahāvīra’s closest followers, the Pūrvas were lost centuries before the scriptures were first written down. According to tradition, they were lost nearly 200 years after the final liberation of Mahāvīra, early in the fourth century BCE.

This category of texts provides a good example of how Jains view the beginnings of their scriptural tradition. It shows how they are aware that this tradition is not eternal and could undergo losses in the course of time that cannot be recovered. This contrasts with, for instance, the Hindu doctrine that the Vedas are eternal.

Whatever concerns the Pūrvas and the early phases of Jain history connected with them is very hypothetical because all the evidence dates from later periods and is difficult to interpret literally. Later accounts describe how the Pūrvas were made up of texts on various subjects. As well as containing key topics of Jain belief, such as the soul, karma and knowledge, they were believed to embrace subjects including occult powers, yogic powers and astrology. 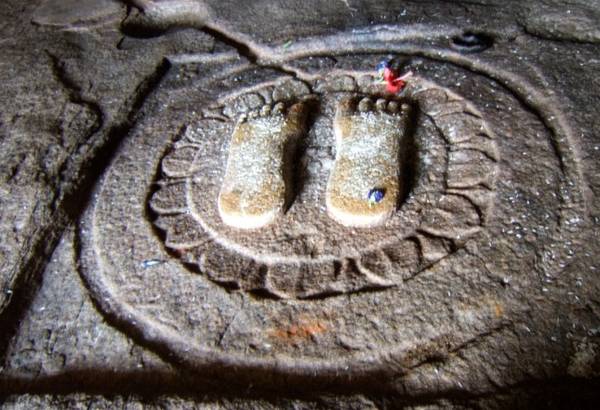 The Sanskrit term pūrva means ‘early, ancient, previous’. In the Jain context, it is understood as a body of texts that is said to have been composed first. Jains believe the Pūrvaswere produced by the Jinas’ direct disciples – the gaṇadharas – before the Aṅgas, another class of scriptures.

All Jains, whether in the sects of Digambara or Śvetāmbara, agree that the Pūrvas were lost at an early stage. According to some sources, Mahāvīra had predicted that they would last one thousand years. According to other sources, they were to be extinct 170 years after the final liberation of the 24th Jina.

There are diverging accounts about how the loss happened. But it is likely to have been gradual. It is usually presented as the result of the great famine and consequent migrations of Jain monastic communities in the 3rd century BCE. The teachings of the Jinas were first passed on orally, as monks told them to their disciples, who made their own disciples memorise them.

The last religious teacher who is said to have known all the Pūrvas is reported to have been ‘Bhadrabāhu’. He is thus known as the last śruta-kevalin – ‘absolute knower of the tradition’. According to Digambara accounts, Bhadrabāhu migrated from the ancient kingdom of Magadha in north-eastern India to south India, along with the Emperor Candragupta. According to Śvetāmbaras, Bhadrabāhu did not go to the south but took refuge in Nepal. When the teacher Sthūlabhadra organised a recitation of sacred texts, Bhadrabāhu was called because nobody else knew the Pūrvas.

The Pūrvas are said to have been part of another work, the Dṛṣṭi-vāda, which is regarded as the 12th Aṅga. But knowledge about this work was lost before the Āgamas of the Śvetāmbara sect were put into writing.

Jains believe there were 14 Pūrvas although there is no direct trace of them in manuscripts. The only information about them comes indirectly from Śvetāmbara and Digambara texts, and is rather similar in both sectarian traditions. This suggests that it reflects the memory of a phase before the split, which took place early in the Common Era.

This information concerns the names of the Pūrvas and their contents. Commentators from the ninth century onwards occasionally quote verses that they ascribe to the Pūrvas (Kapadia 1941: 86–87). Various authors consider them as sources for their own work, in particular when they relate to the science of omens or esoteric topics.

Because there are 14 Pūrvas, Bhadrabāhu is known as catur-daśa-pūrvin – ‘the 14 Pūrvas man’. Those of the religious teachers who came after him usually knew only nine. At the most, they may have known ten of the texts.

This table shows how the Pūrvas were comprehensive, covering knowledge, speculations and methodology on various subjects. Hence they could have been viewed as a basic collection of texts. On the other hand, the Ṣaṭkhaṇḍāgama, which contains the Digambara scriptural tradition, is said to be based on what its author remembered of one of the Pūrvas. The presence of topics relating to occult powers, yogic powers and astrology is also noteworthy.

Tradition disagrees as to whether the language of the Pūrvas was Prakrit or Sanskrit. Forms of Prakrit were used for the available Āgamas of the Śvetāmbaras and the Siddhānta of the Digambaras.

The Bodleian Library is part of the University of Oxford, the official university library with various specialist libraries. It boasts extremely extensive collections of books, newspapers, magazines, journals, manuscripts, maps, musical scores, and official and personal papers, both ancient and modern. With large Jain holdings, the Bodleian is a JAINpedia partner.

One of the JAINpedia partners, the British Library is the national library of the UK. Based in London, it holds millions of historical and contemporary documents of all kinds, including books, newspapers, magazines, journals, manuscripts, musical scores and political and personal papers and letters. It also has a large collection of sound recordings and illustrations. Its collection of Jain manuscripts is one of the biggest outside India.

The V&A in London specialises in art and design. Its enormous collections include historical and contemporary sculptures, textiles, furniture, jewellery, photographs, drawings, books, prints, ceramics, glass- and metalwork, theatre and performance artefacts. It has extensive Asian holdings, including many illustrated Jain manuscripts, and is one of the JAINpedia partners.

Part of the Wellcome Institute, the Wellcome Collection is one of the JAINpedia partners. Its extensive collections include historical and contemporary books, manuscripts, prints, paintings, photographs and films, with a bias towards science and medicine. The Wellcome holdings of Jain materials are small but valuable and interesting.

The Jain eLibrary provides PDFs or other files of Jain texts to download for non-commercial purposes. Scriptures, commentaries, dictionaries, articles, magazines and books on all aspects of Jainism are available in many languages, including English and modern Indian languages. Most sects are represented and both ancient and contemporary works are included.

Only registered users who have signed into the site can download material. To register, you must provide a valid email address, a password and some personal details.

The Centre of Jaina Studies at the School of Oriental and African Studies (SOAS) in the University of London, is the only academic centre specialising in Jain research outside India. Established in 2004, the centre hosts an annual conference for scholars of Jainism and publishes an annual newsletter and the International Journal of Jaina Studies (Online). It also runs undergraduate and postgraduate degrees in Jain studies.

The Bhogilal Leherchand Institute of Indology in New Delhi focuses on scholarly research into Śvetāmbara Jainism. With a library of manuscripts for research, it organises academic seminars and publishes scholarly books.

The French Institute of Pondicherry is a research centre of the French Ministry of Foreigh Affairs. Founded in 1955, it undertakes scholarly research and training in South and South-East Asia. The website is in English.

Jainworld provides a list of Indian universities that have departments with researchers in or courses investigating aspects of Jainism.

Jainworld provides a list of research institutions in India that focus on various aspects of Jainism.

Enrolling students from 2011, Claremont Lincoln University in California, USA, focuses on the academic study of religions. It offers a programme of Jain studies in partnership with Jain organisations based primarily in North America.

The Centre of Jaina Studies in the School of Oriental and African Studies (SOAS), at the University of London, publishes an annual newsletter, which is available to download as a PDF. The newsletter features:

Based in St Petersburg, the Institute of Oriental Manuscripts holds 150 Jain manuscripts. The website gives full information in English about the history and work of this research institute, part of the Russian Academy of Sciences.