Supārśvanātha or Lord Supārśva is the seventh of the 24 Jinas of the present cycle of time. The word Jina means ‘victor’ in Sanskrit. A Jina is an enlightened human being who has triumphed over karma through practising extreme asceticism and teaches the way to achieve liberation. A Jina is also called a Tīrthaṃkara or ‘ford-maker’ in Sanskrit – that is, one who has founded a community after reaching omniscience.

Supārśva is not an historical figure. He is not singled out for individual biographies in the Śvetāmbara canonical scriptures. Treated like most of the other Jinas, he is provided only with basic biographical information. This information is fairly standardised and remains identical throughout later sources except for occasional variations, or confusions, in numbers.

The meaning of his name is literally ‘having beautiful flanks’, which has positive connotations because it refers to the physical perfection of a Jina. The name Supārśva is connected with that of the 23rd Jina, Pārśvanātha or Lord Pārśva. Indeed, these two Jinas have a number of features in common, specifically their:

There are minor differences between the accounts and descriptions of this Jina among the two main Jain sects. According to Śvetāmbara biographies, Supārśva married princesses and governed the earth as a king before leaving worldly life for monastic initiation. According to the sect of the Digambaras, none of the Jinas assumed the responsibilities of a householder or king before becoming monks. 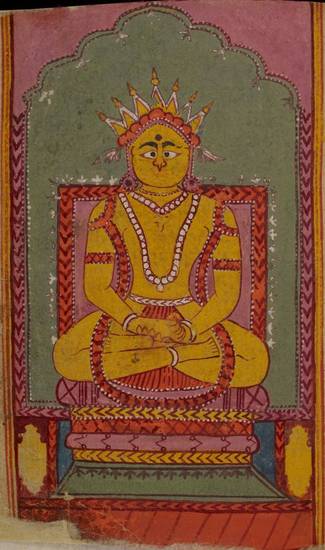 Each Jina has standard biographical information found in various sources. Among the earliest Śvetāmbara canonical sources that provide biodata of the 24 Jinas is the final section of the fourth Aṅga, the Samavāyānga-sūtra and the Āvaśyaka-niryukti. Among the earliest of the Digambara sources is a cosmological work, the Tiloya-paṇṇatti.

The standard Digambara biography of Supārśvanātha or Lord Supārśva is found on pages 39 to 44 of the 1968 edition of Guṇabhadra’s Uttarapurāṇa in Sanskrit and Hindi. The standard Śvetāmbara biography is on pages 303 to 313 in volume II of Johnson’s English translation of Hemacandra’s work, Tri-ṣaṣṭi-śalākāpuruṣa-caritra.

In the case of Supārśvanātha or Lord Supārśva, Śvetāmbara sources state that this name was given to him for a reason connected with the time of his mother’s pregnancy. Hemacandra relates that his father gave the baby this name because his mother was ‘beautiful-sided’ – su-pārśvā – while he was in her womb (Johnson’s translation of Hemacandra, Triṣaṣṭi-śalākā-puruṣa-carita, volume II, page 307). In doing this, he follows the traditional explanation provided earlier in the Āvaśyaka-niryukti, a Prakrit scripture which gives explanations for each of the 24 Jinas’ names.

The traditional association of Supārśvanātha or Lord Supārśva with Vārāṇasī – modern Banaras – in Uttar Pradesh, is recorded, for instance, in the Vividha-tīrtha-kalpa, a 14th-century work on sacred places by the Śvetāmbara monk Jinaprabha-sūri. It is also the birthplace of the 23rd Jina, Pārśvanātha or Lord Pārśva.

The exact place where Supārśva was born is supposed to be ‘Bhadaini Muhallah’, a part of Banaras situated near the bank of the Ganges and known as the ‘Jain ghat’. It is located at about 1.5 kilometres from Bhelupura.

Today, the site is a place of worship for both Śvetāmbaras and Digambaras, who have each installed a different image of the seventh Jina in their respective temples. The Śvetāmbaras’ idol is white and is 68 centimetres tall while that of the Digambaras is black and 46 centimetres tall.

A Jina is not an enlightened being who exists alone after reaching omniscience. After perfect knowledge comes general preaching – samavasaraṇa. This sermon, which is attended by all, is reported in the scriptures as resulting in large numbers of listeners being inspired. Many turn to religious life, becoming monks or nuns, while many others make the vows that lay people – śrāvaka and śrāvikā – can follow in their everyday lives. Furthermore, the Jina’s teachings are preserved and passed on by his chief disciples – the gaṇadharas. This is why a Jina is also called a Tīrthaṃkara, meaning ‘ford-maker’ or ‘founder of a community’.

Each Jina establishes a ‘fourfold community‘, led by the chief disciples. Made up of monks, nuns, lay men and lay women, the fourfold community follows the principles the Jina has set out in his preaching. How members follow the religious teachings vary according to whether they remain householders or become initiated into mendicancy. Individual figures relating to each Jina are thus important.

Identification and association with snakes 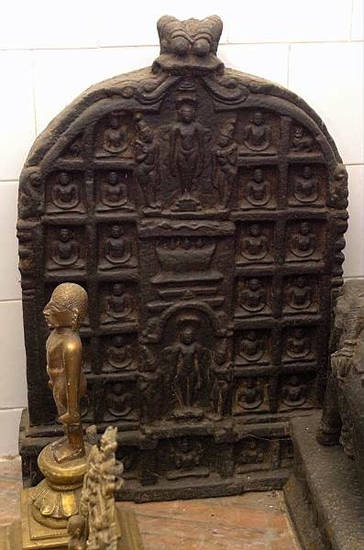 Supārśvanātha or Lord Supārśva is also one of the few Jinas whose iconography is distinctive, as he is often – but not always – shown with snakehoods above his head. This association with snakes is stated, for instance, in the standard biography of this Jina as narrated by Hemacandra in the Triṣaṣṭi-śalākā-puruṣa-caritra. It is said to go back to the time when the Jina-to-be was an embryo:

The Queen [dreamed she] saw herself asleep on a couch of serpents which had one hood, five hoods, and nine hoods

In the account of this Jina’s general preaching following his attainment of omniscience – the samavasaraṇa – the god Śakra creates snakes over Supārśva’s head that are reminiscent of those his mother saw in her dream. This is narrated as something which then became characteristic of all samavasaraṇas.

The antiquity of this association, however, is unknown. No reference to it is found either in early sources or in another Śvetāmbara biography of this Jina, the Cauppaṇṇa-mahāpurisa-cariya, written in the ninth century by Śīlānka. Nor is there a mention in the Digambara version in Guṇabhadra’s Uttarapurāṇa. It is likely that this association, which is so important in the case of the 23rd Jina, Pārśvanātha or Lord Pārśva, was carried over to Supārśva because of the similarity of their names.

In theory, the snakes are shown above the head for Supārśva, and behind the body for Pārśva, but this distinction is far from being observed everywhere. In many cases it is thus difficult to distinguish between depictions of the two Jinas when there are no personal emblems or inscriptions.

The number of snakehoods is theoretically different for both, namely: 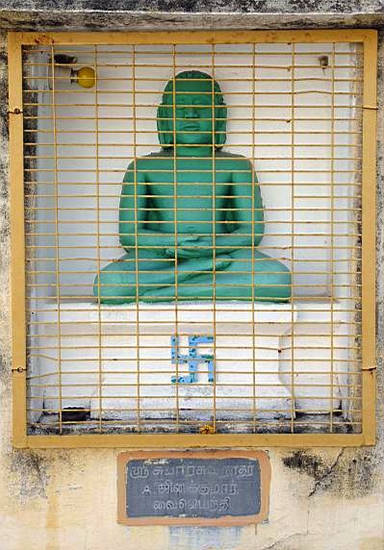 Figure of SupārśvaImage by Ramesh Kumar © French Institute of Pondicherry

All of the princes who become Jinas are carried on a palanquin to the park where they perform the ritual gesture of initiation into monastic life – dīkṣā. The palanquin of Supārśvanātha or Lord Supārśva is named Manoharā. On this occasion, he is accompanied by numerous kings.

He performs a two-day fast. The next day he breaks his fast at the house of King Mahendra in the town of Pāṭalīkhaṇḍa.

Supārśva wanders for nine months as an ordinary ascetic and reaches omniscience under a śirīṣa tree.

The life of Supārśvanātha or Lord Supārśva is not rich in events. In the ninth-century Lives of the 54 Jain Great Men – Cauppaṇṇa-mahāpurisa-cariya – written in Prakrit by the Śvetāmbara monk Śīlānka, the chapter about the seventh Jina has a little more than one page.

Even so, there are several sizeable biographies focusing on the seventh Jina. Among them the most famous and most important is the Prakrit Supāsa-nāha-cariya. 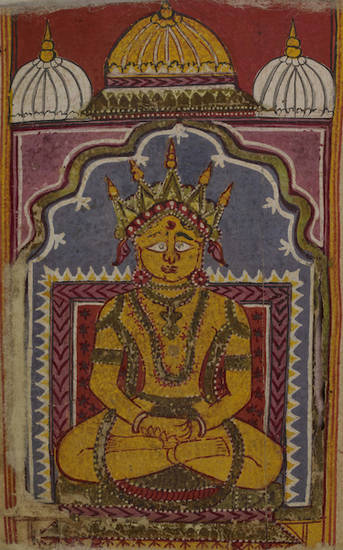 With about 8,700 stanzas in Sanskrit, the Supāsa-nāha-cariya was written in 1142 CE (1199 of the Vikrama era) by the monk Lakṣmaṇa-gaṇi, pupil of Hemacandra-sūri of the Harṣapurīya-gaccha monastic order. The text is divided into three chapters (Chaudhari 1973: 81–82).

The first one narrates at length the previous births of the future seventh Jina as a human being or god. It explains how he gained the category of karma that implies he would become a Tīrthaṃkara – Tīrthaṃkara-nāma-karman.

The third one presents the Jina’s attainment of omniscience and is also an extensive exposition of various ascetic practices and postures. It is supplemented with a number of sermons and intervening stories which cover:

An illustrated manuscript of this work, covering 443 folios and written in 1422 CE (1479 of the Vikrama era) in Delavada in Mewar, Rajasthan, has 37 lively and colourful paintings (list in Punyavijaya 1956). Some of them are reproduced in Muni Punyavijaya’s article and a few also in the book New Documents of Jaina Painting (Moti Chandra and U. P. Shah 1975).

Supārśva is mainly praised alongside other Jinas in hymns dedicated to the 24 Jinas. One instance is the devotional song dedicated to this Jina in the Gujarati set of hymns composed by Yaśo-vijaya in the 17th century. This example can be found among the manuscripts digitised on JAINpedia. 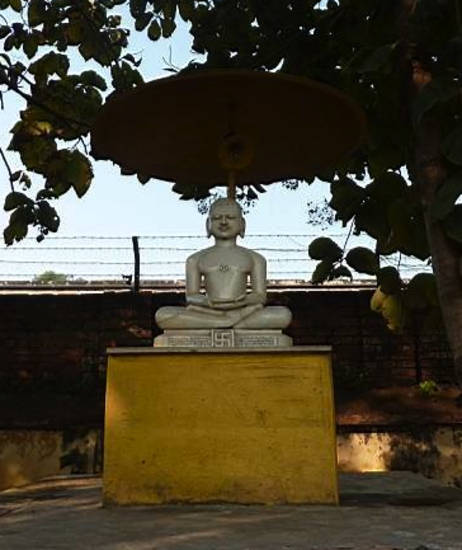 Supārśvanātha or Lord Supārśva is quite popular. As mentioned above, there is some amount of confusion between Supārśva and the 23rd Jina Pārśvanātha or Lord Pārśva. Thus there may be many more images available of the former than thought at first sight.

Metal images showing Supārśva alone or with other Jinas are also available in temples and museums. 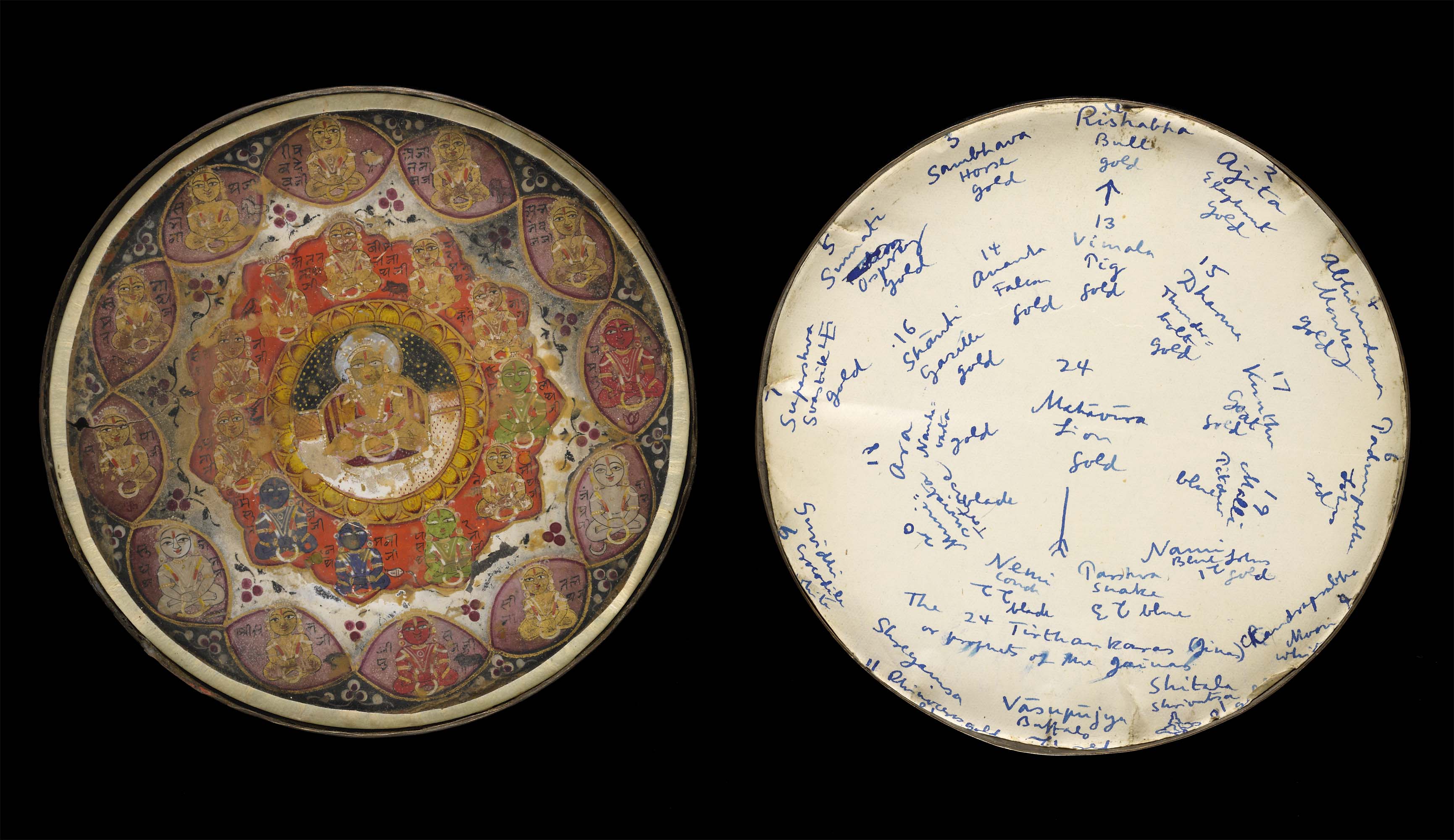 Jinas at the top of the universe