Although Jain dharma or belief developed over many centuries, it can be thought of in terms of modern science. This rich inheritance of universal philosophy on a scientific basis means that many Jain concepts have more relevance now than ever before. However, factors such as the technical terminology and language of the original works present obstacles for contemporary readers and mean that key concepts need to be recast. It is extremely important to reinterpret the foundations of Jainism in the light of recent scientific findings, since some of the answers that individuals seek now were given by Jains many centuries ago.

A summary of the essence of Jain belief may be termed the ‘Four Noble Truths’. Drawn from the ancient scriptures, these use the vocabulary of modern science to describe the basic Jain principles of the soul and karma. These truths set out the path to spiritual liberation. The concepts of karmic matter and the working of karma through the cycle of rebirth are likened to photons and computers. Contemporary research into emotional intelligence underlines the vital importance of listening and empathy to being a good lay Jain. The four noble truths are related to other summaries of Jain doctrine, such as the ‘three jewels’ and the svastika. The two distinctive elements of Jain philosophy are the doctrines of:

What is important is the quality of being Jain. That is, instead of Jain-ism, this article focuses on Jain-ness.

The ancient Jain texts are written in an obscure technical language that makes them almost impenetrable to a modern readership. Some of the concepts are very deep and to contemporary readers it is surprising that these could have been propounded in a non-scientific era. The texts were also originally written down in Sanskrit and Prakrit, which are unknown to most contemporary Jain followers, especially perhaps those Jains who live outside India. In addition, rituals and obscure interpretations have arisen over the centuries that can be confusing.

There is a clear need to reinterpret these concepts so they can be understood by the present generation and generations to come.

To help contemporary readers understand more clearly, here are four axioms that have been formulated from various old scriptures and translated into English. While using the terminology of modern science, these echo the notion of the ‘Four Noble Truths’ of Buddhism.

The first three truths set out the science of the soul, and the three parts of the fourth truth give their Jain applications.

The foundation of Jainism starts with the first noble truth, which asserts the existence of karmic particles or ‘karmons‘, as they are called here. These are unusual elementary particles in the sense that they interact with the soul as if they were spiritual photons. That is, Jainism explains life through the interaction of such small invisible atomic particles and the soul.

The four noble truths present the way to reach the ultimate end of Jain belief, which is becoming a siddha or liberated soul – that is, achieving mokṣa.

A full discussion of these concepts of Jain dharma is given in Four Noble Truths (Chatvarwe Arya Satya) (Mardia 1990), written with the help of many prominent gurus and scholars. 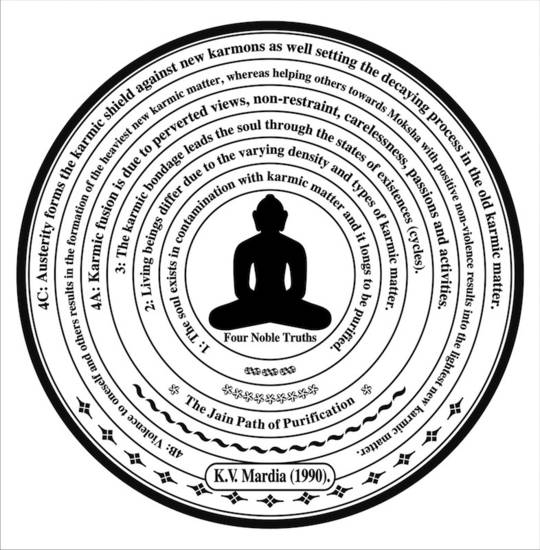 The extremely minute particles that form karmic matter are here called ‘karmons‘. These karmons are embedded in the soul, obscuring the inherent key properties of the soul such as infinite bliss.

Invisible particles such as photons, which give light, became known only at the beginning of the last century. So it is surprising that the Jinas could put forward such a concept of ‘spiritual photons’ so many centuries ago. If they are physical particles then it is still a challenge for science to hunt for their existence.

The second noble truth implies that this karmic matter is responsible for different species. So in some sense karmic particles are far more subtle than DNA. It has only recently become clear through genomics that there is hardly any difference between the genes in human beings and chimpanzees and many others. There are also questions that prompt a further look into Jain belief and cloning. The Jain belief is that all souls are separate entities – that is, individuals – whereas cloning might imply that a new life can begin in this way. But this is a misunderstanding because cloning only implies changing the genetic code of an existing egg. Therefore the same soul continues, so the fundamental Jain principle is still valid.

The concepts of karmons and karmic activity lead to an explanation of the cycle of birth and rebirth through karmic matter, which is covered in the third noble truth.

Without conscious effort or deliberation, human beings keep absorbing karmons through activity and throw some out after their effect has taken place. Thus the soul has what might be thought of as a karmic computer. This personal karmic computer keeps records and also dictates some tasks from previous records – that is, past lives. The fundamental aim in life is to remove this old karmic matter as well as to stop the inflow of new karmons, resulting in new karmic matter. So this karmic process can be stopped and rehabilitated through Jainness.

One of the key negatives responsible for heavy karmic matter, as given in the fourth noble truth, is kaṣāyas – passions or emotions. These passions may be destructive or positive. The destructive emotions are composed of:

In English the initials of these words form the acronym AGED, introduced by Gurudev Chitrabhanu in the late 20th century. This is an apt acronym because the passions have an ageing effect.

Indeed, the term ‘Jina‘, from which ‘Jaina‘ is derived, stands for the one who has conquered these inner enemies. Surprisingly, Albert Einstein’s idea of a follower of a true religion (Nature 1940: 146) is:

a person who is religiously enlightened appears to me to be one who has, to the best of his ability, liberated himself from the fetters of his selfish desires[.]

The ability to accept other people’s emotions is crucial to being a good Jain. This can be thought of in modern terms as having well developed emotional intelligence.

In the present time there has been considerable work done on understanding human emotions, including the rise of interest in ’emotional intelligence’ or EQ – emotional quotient. This can be understood as being both in contrast to and complementary to IQ – intelligence quotient.

One of the key factors in EQ is achieving emotional intelligence. This is similar to samyaktva – first awakening – which is the fourth step of the Jain guṇa-sthāṇa. One of the key qualities in EQ is empathy – that is, the ability to sense how other people feel. It is the capacity to accept another person’s feelings. It may be described as the quality of being able to:

This is the definition of a śrāvaka – the term used for a Jain lay man, which means a great listener. 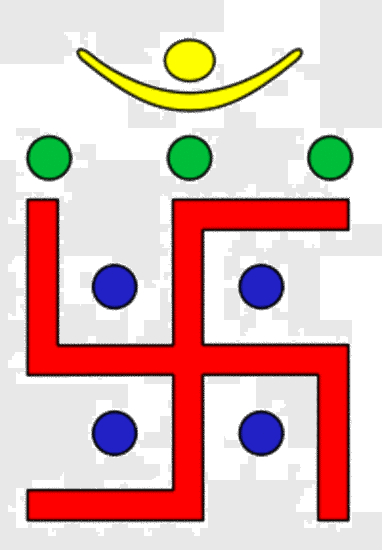 The ‘Four Noble Truths’ of Jain dharma explained in this article are reminiscent of the ‘Four Noble Truths‘ of Buddhism. There are several well-known ways of synthesising Jain principles. These commonly take the form of numbered qualities or definitions. Since some of them are probably thousands of years old, the aim of providing a symbolic representation of key ideas is very traditional. The more contemporary method of the four noble truths can be linked to two of the conventional symbolic summaries.

The four noble truths are connected to the ‘three jewels‘ – ratna-traya – of the Jains, which consist of:

The table makes clear the relationship between the four noble truths and the three gems.

Belief in these four truths taken together represents ‘right faith’.

In deva-pūjā – a worship ceremony in a temple – a composite svastika is used, which has three layers. This can also be thought of as equivalent to the four noble truths. The symbol’s four arms represent the cycle of birth and rebirth going into the four different states of existence – gati. The four dots in between the arms symbolise the four parts of the Jain community – monks and nuns, lay men and lay women. Together with the cycle of birth and rebirth, these make up the first layer, which is the third truth. The second layer is the three dots representing the three jewels, which comprise the four truths as a whole. The top layer is a crescent disc with a dot. This represents liberation – mokṣa – which is covered in the first and last truths.

Note that there are other symbolic summaries in the Jain faith. For example, the siddha-cakra – ‘circles of Jinas’ – is made up of the nine dignitaries – Nava-pada. The highest beings or concepts of Jainism, these are:

These four essentials or fundamentals are similar to the eightfold path of Buddhism. 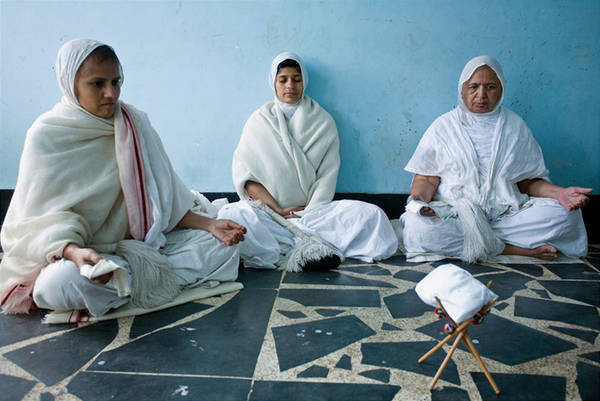 Although knowledge is crucial to spiritual progress, Jain philosophy stresses that a lack of certainty is not to be feared. Instead, it should be welcomed in some respects as uncertainty contributes, paradoxically, to greater understanding. The field of Jain logic contains the two important ideas of:

The concept of syād-vāda means that only what is known at a particular time and place, involving those specific circumstances, can be stated with any degree of certainty. It asserts that there are many aspects of reality, which no one person can know. Examples can be found in chapter nine of Mardia 1990/2007. The notion of syād-vāda stresses that nothing is absolute. Karl Popper, one of the greatest logicians of the last century, also emphasised principles of non-absolutism in science.

Secondly, Jain logic recommends elements of relativism in thinking, in the holistic principle of anekānta-vāda. This notion may be translated as ‘truth from many viewpoints’. The concept of anekānta-vāda holds that the same thing can be seen from many various standpoints and thus appears different to each viewer. Each distinct view may contain a glimpse of the truth. The truth of reality cannot be understood from a single point of view. See chapter nine of Mardia 1990/2007 for examples. In fact, relativism in thinking and open-mindedness is needed for a true Jain.

Thus the label ‘Jainism’ is a misnomer for what can be termed ‘Jain-ness‘ or the ‘Jain spirit’.

Jain beliefs about the soul

An overview of Jain beliefs about the soul on the BBC website, provided as part of the Religions section.

The Indian scholar M. R. Gelra of the Jain Vishva Bharati Institute in Ladnun, Rajasthan, has written a book called Science and Jainism: Perspectives, Issues and Futuristic Trends. It is available to read online on the HereNow4U website.

Professor M. R. Gelra summarises the Jain faith and how it relates to science in the preface to his 2007 book Jain Studies and Science. The full text is available to read online on the HereNow4U website.

The HereNow4U website presents an essay by Manikant Shah based on the work of Professor L. C. Jain, director of the Vidyasagar Research Institute in Jabalpur, Madhya Pradesh, India. The 2011 essay points out some connections between Jain beliefs and scientific discoveries.

Sohan Raj Tater's 2008 article on the HereNow4U website examines the relationship between the Jain theory of karma and contemporary scientific work in genetics.

The third edition of this book by Jethalal S. Zaveri and Muni Shri Mahendra Kumar discusses the relationships of Jain philosophy, modern physics and Western philosophy. The full text is available to read online on the HereNow4U website.