The festival of Mahāvīr Jayantī is celebrated annually in commemoration of the birthday of the 24th Jina, Mahāvīra. It takes place on the 13th day of the bright half of the month of Caitra, which runs roughly from mid-March to mid-April.

One of the few festivals celebrated by all sects of Jains, Mahāvīr Jayantī is also the only Jain festival officially recognised by the Indian government. Although celebrations vary in different places, among the diverse Jain communities, there are some common elements to the festival. The birth of a Jina is a key focus of worship among all Jains. For this reason the festival is often called Mahāvīr Janma Kalyāṇak – ‘the auspicious event of Mahāvīra’s birth’. Marking the arrival of the last Jina of this era is often a significant religious and social event. 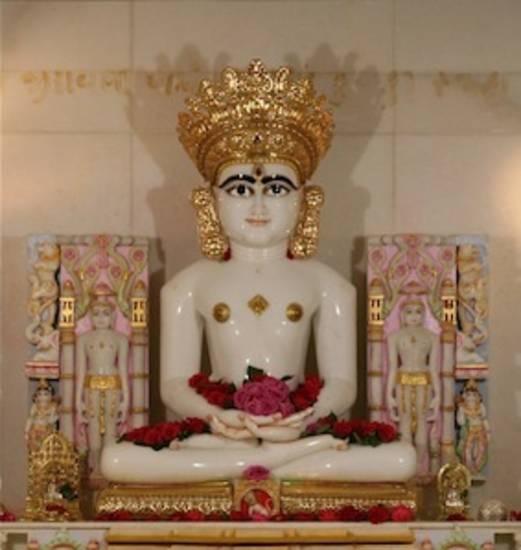 Among Jain festivals, Mahāvīr Jayantī is unique in some respects. Firstly, it is celebrated by all Jains, whether Digambara or Śvetāmbara, which is not the case with all Jain festivals.

Moreover, it is the only festival of the Jains recognised by the Indian government. As such, it is the only one in the official calendar of the national festivals of India and is therefore one of the most visible expressions of Jain identity in today’s India. It is interesting to note that in 2010 the Prime Minister of India, Dr Manmohan Singh, greeted the Jains on this day. Newspapers reported that he paid homage to the teachings of Mahāvīra as a source of ‘happiness and contentment’.

The day-long festival of Mahāvīr Jayantī is celebrated within the context of another festival, that of the Śvetāmbara Paryuṣaṇ and the Digambara equivalent of Daśa-lakṣaṇa-parvan.

The Jain diaspora also celebrates this day. Their festivals vary according to the general environment of the countries where they have settled. 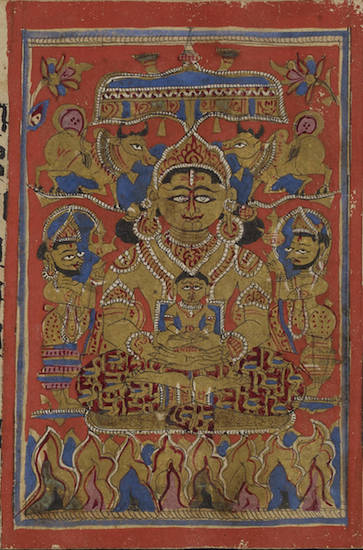 Many Jain festivals commemorate a significant religious event or story, and Mahāvīr Jayantī is no exception. The story of the birth of a child who will grow up to become a Jina is the original event here. The primacy of this festival grew in the 20th century, as the political landscape of India developed.

The inspiring event of this festival is the birth of the 24th Jina, Mahāvīra. The birth of a Jina is an especially high-profile event named kalyāṇaka – ‘good, auspicious‘. Together with a Jina’s conception, renunciation of worldly life, enlightenment and liberation, it forms the standard group of pañca-kalyāṇakas, which are at the centre of devotees‘ worship.

A festival takes place when an event is associated with a date. The date of Mahāvīra‘s birth is mentioned in early sources, such as the Kalpa-sūtra:

At that time, when nine months had fully passed, on the 13th day of the bright fortnight, the second one of Caitra, the first month of the warm season, Lord Mahāvīra was born.

In this traditional account, the event is said to have been followed by public demonstrations of joy and by rains of flowers, gold, silver and so on, coming from the gods. The father of the Jina-to-be, King Siddhārtha, organised a feast to rejoice at the birth of his son, who was destined to be a very great man.

The medieval History of the 63 Great Men – Triṣaṣṭi-śalākā-puruṣa-caritra – by Hemacandra is probably the standard account of Mahāvīra’s life. Here the focus of the celebrations is the bathing of the newborn child by Śakra, the king of the gods. Śakra has taken him to Mount Meru after forestalling his parents’ worry by replacing the baby with an image.

The Lord’s bath-festival was held by the Indras [gods] with pure fragrant water from the tīrthas [temples] joyfully to the accompaniment of musical instruments that were played. The gods, asuras, men and Nāgas worshipped the bath-water and poured it repeatedly [over themselves] so it covered their whole bodies.

After the bath and hymns of praise, the baby was returned to his mother’s side and the replacement image taken away. Then the king had people released from the prisons at his son’s birth-festival. For the birth of the Arhat was for the release of people from the [cycle of] birth’, as Hemacandra puts it (Johnson’s translation: 32). 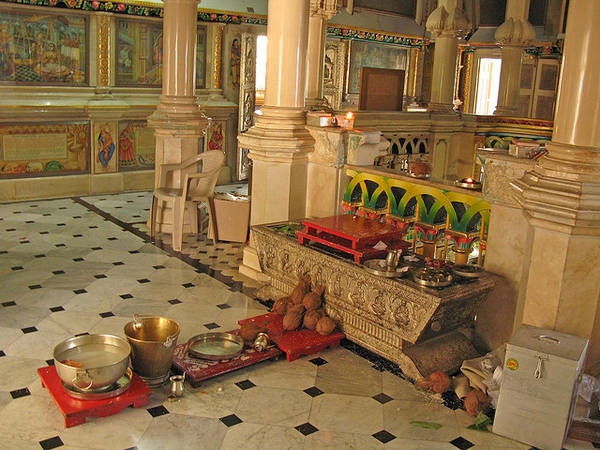 Mahāvīr Jayantī has always been the most important Jain festival but its institution as an annual public festival seems to have taken place in the 20th century, in post-Independence India. It was perhaps encouraged by the parallel Buddhist festival, the Buddha Jayantī, which marks the birth of Buddha. Since India is a secular state, it is important that each religion practised in the country has at least one day of official recognition.

The official status of Mahāvīr Jayanti has an impact on the way it is celebrated. For instance, Cort contrasts the great procession and speeches by industrialists and various officials in Ahmedabad in 1987 with the lack of importance it had in a small town like Patan (Cort 2001: 181–182), both in Gujarat. 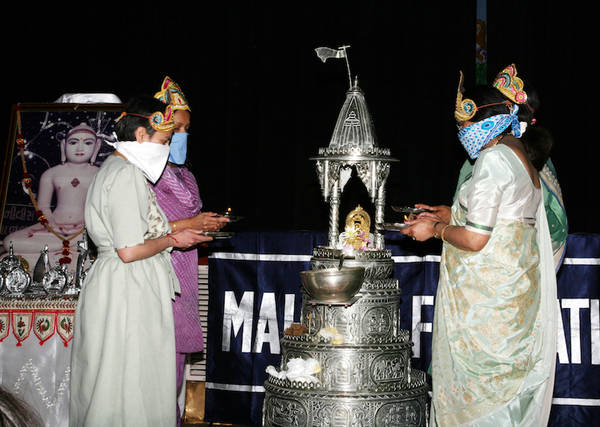 Like several Jain festivals, Mahāvīr Jayanti is both a retelling and a restaging of the event at its heart. The actual celebration may differ from place to place and group to group, yet it has some defining elements.

Besides the birth proper, Mahāvīr Jayantī also celebrates Mahāvīra‘s incarnation in the womb of his mother Triśalā and the auspicious dreams she experienced. These dreams number 14 in the Śvetāmbara sect and 16 according to the Digambaras. In religious practice, the dreams are depicted in 14 or 16 silver or golden plaques, hung on a cord attached to the ceiling of the local temple. This aspect of the celebration is important because the dreams announce the greatness of the child that will be born.

In order to commemorate and restage the holy bath the gods give to the newborn child, people gather in the temple, preferably one dedicated to Mahāvīra. A Jain lay man and his wife embody the king of gods and his spouse. They have generally gained this honour through auctions – bolī. They pour perfumed water on a small Jina image placed on a pedestal, which represents Mount Meru, and put some sandalwood paste on it. Then they distribute large amounts of money as charity and for the maintenance of the temple. Other members of the congregation take part joyously, singing hymns of praise to Mahāvīra, throwing flowers on the image and waving small lamps in front of it. Sometimes, images of Mahāvīra are taken in procession through the streets.

This YouTube video from 2010 shows part of a large procession – yātrā – during the festival of Mahāvīr Jayanti. This procession is held in Jaipur, Rajasthan, with the noise, colour and singing, dancing crowds in the video indicating the lively atmosphere of the event. Marking the birth of the last Jina, this festival is one of the principal Jain festivals and is celebrated by all Jain sects.

This 2009 YouTube video shows a Mahāvīr Jayanti celebration in the temple in Indore, Madhya Pradesh. Digambara novice monks carry an idol of Mahāvīra in the centre of a colourful procession. Lay people perform rās-garba dances with sticks. A local lay man and his wife, who ride an elephant in this celebration, play the king and queen of the gods. The annual festival commemorates the birth of the 24th Jina, Mahāvīra.

The Prime Minister of India, Manmohan Singh, greets Jains in the run-up to the annual celebrations of Mahavir Jayanti, reports the Hindu newspaper in a piece dated 27 March 2010.

First part of a lively Digambara procession arranged for Mahāvīr Jayanti in 2010, held in Indore, Madhya Pradesh. This YouTube film shows the music, dancing and joyful atmosphere of many Jain festivals, which is especially demonstrated in the procession – yātrā – also called chariot-procession or car-festival – ratha-yātrā. As this festival celebrates the birth of the 24th Jina, Mahāvīra, two lay people rock a model of a baby in a cradle and a boy dressed as the Jina's lion emblem walks before them. The Jain flag is carried by drummers and worn as a scarf by many festival-goers, many of whom sport crowns. The lay couple representing the Jina's parents ride in a chariot.

You can also watch the second part of the film.

Second part of a lively Digambara procession in Indore, Madhya Pradesh, held to celebrate Mahāvīr Jayanti in 2010. This YouTube film shows lay people rocking a model of a baby in a cradle. Other families who have won auctions – bolīs – held among the lay community for the honour of taking leading roles in the procession ride in chariots or hold the Jain flag. Many procession participants wear badges of the Jain flag. Lay people donate money as the idol of Mahāvīra passes by on a procession float, sheltered under a large model of Mount Meru, the cosmic axis. The procession ends at the temple, where a naked monk addresses the crowds.

You can also watch the first part of the film.

The Indian Express newspaper website provides a brief slideshow of the colourful celebrations across India during the 2013 festival of Mahāvīr Jayanti. Celebrating the birth of the 24th Jina, Mahāvīra, this is the only Jain festival with a place in the official calendar of India.

This YouTube video from 2010 shows part of a large procession – yātrā – during the festival of Mahāvīr Jayanti. This procession is held in Jaipur, Rajasthan, with the noise, colour and singing, dancing crowds in the video indicating the lively atmosphere of the event. Marking the birth of the last Jina, this festival is one of the principal Jain festivals and is celebrated by all Jain sects.

The festival of Mahāvīr Jayantī is often marked with a procession in which images of the 24th Jina Mahāvīra are carried through the streets. This large procession is made up of animals, singers and musicians, dancers and local Jains celebrating the birth of the last Jina. This procession took place in March 2010 in Jaipur, Rajasthan and also featured the message of environmental conservation.

Captured in two parts on YouTube, this is the first part. You can also watch the second part.

The festival of Mahāvīr Jayantī is often marked with a procession in which images of the 24th Jina Mahāvīra are carried through the streets. This large procession is made up of animals, musicians and singers, dancers and local Jains celebrating the birth of the last Jina. People perform worship in front of the image. Children dressed in white represent monks and nuns while others re-enact scenes associated with Mahāvīra’s birth. Nude Digambara monks stand out in the crowd. This procession took place in March 2010 in Jaipur, Rajasthan and also featured the message of environmental conservation.

Captured in two parts on YouTube, this is the second part. You can also watch the first part.

This 2013 video on YouTube shows the procession during the festival of Mahāvīr Jayantī in Khandwa, Madhya Pradesh. White horses in bright trappings lead the procession – yātrā – while children carry the Jain flag behind them. A boy is dressed as a lion, the emblem of the 24th JIna Mahāvīra. The heart of the procession is the golden statue of Mahāvīra set within a representation of the cosmic axis, Mount Meru. A family takes the positions of high privilege around the image, which they have won by auction – bolī. 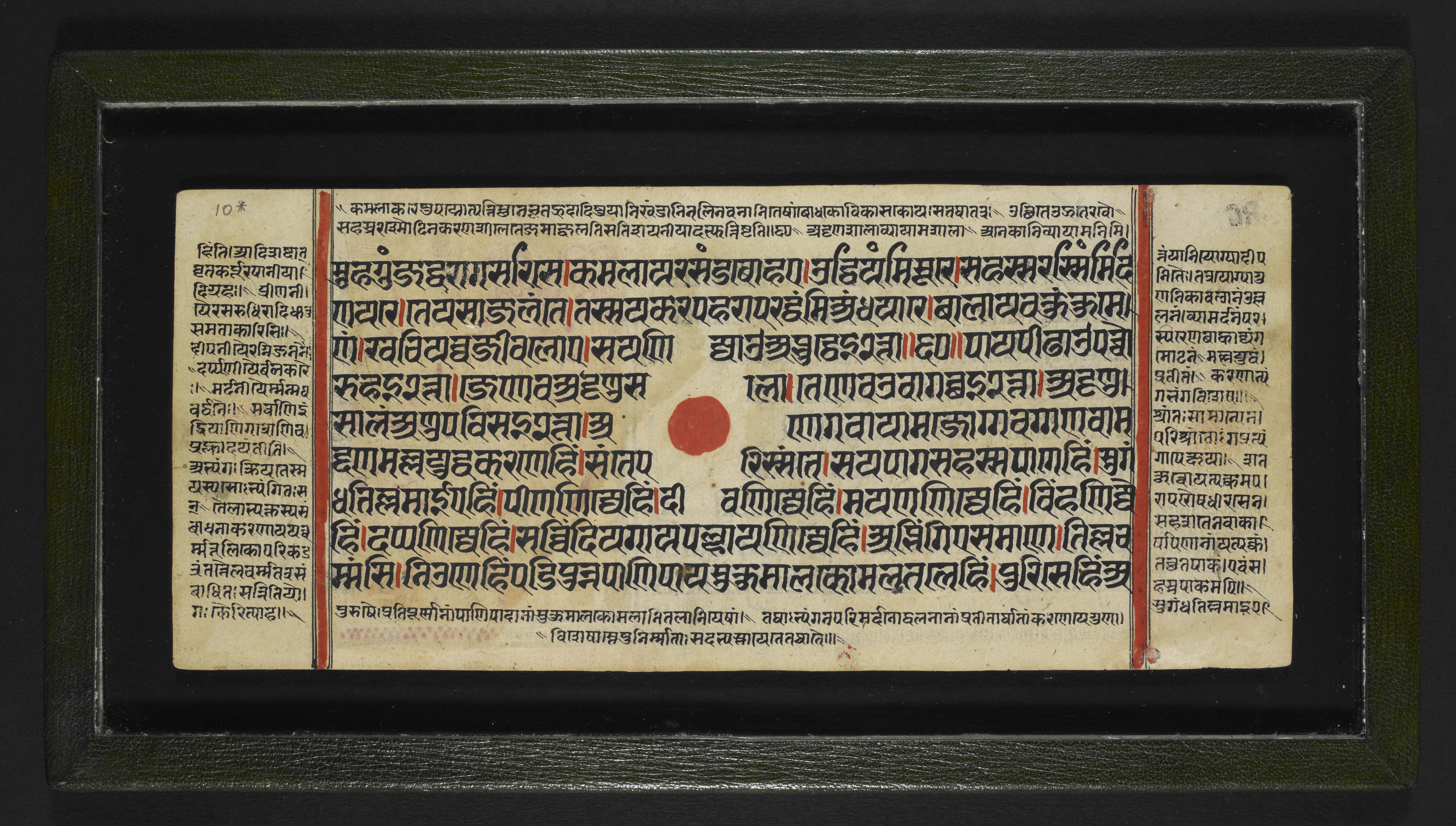