Candraprabhanātha or Lord Candraprabha is also known as Candraprabha-svāmī and Candraprabhu-svāmī. He is the eighth of the 24 Jinas of the present cycle of time. The word Jina means ‘victor’ in Sanskrit. A Jina is an enlightened human being who has triumphed over karma through practising extreme asceticism and teaches the way to achieve liberation. A Jina is also called a Tīrthaṃkara or ‘ford-maker’ in Sanskrit – that is, one who has founded a community after reaching omniscience.

Candraprabha is not an historical figure. He is not singled out for individual biographies in the Śvetāmbara canonical scriptures. Treated like most of the other Jinas, he is provided only with basic biographical information. This information is fairly standardised and remains identical throughout later sources except for occasional variations, or confusions, in numbers.

The meaning of his name is straightforward, a feature not shared by all the Jinas’ names. Candraprabha means ‘having the splendour of moonlight’ in Sanskrit. Therefore he has a white complexion, often shown as such in paintings and sculptures.

There are minor differences between the accounts and descriptions of this Jina among the two main Jain sects. According to Śvetāmbara biographies, Candraprabha married princesses. He governed the earth as a king before leaving worldly life for monastic initiation. According to the sect of the Digambaras, none of the Jinas assumed the responsibilities of a householder or king before becoming monks. 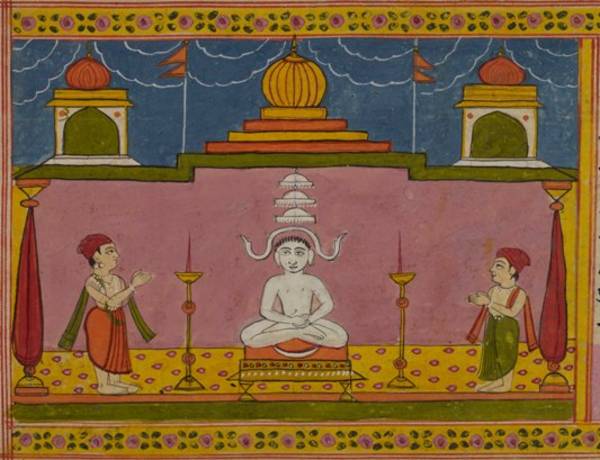 Each Jina has standard biographical information found in various sources.

Among the earliest Śvetāmbara canonical sources that provide biodata of all the 24 Jinas are the final section of the fourth Anga, the Samavāyānga-sūtra, and the Āvaśyaka-niryukti. Among the earliest Digambara sources is a cosmological work, the Tiloya-paṇṇatti.

The standard Digambara biography of Candraprabha is found on pages 44 to 65 of the 1968 edition of Guṇabhadra’s Uttarapurāṇa in Sanskrit and Hindi. The standard Śvetāmbara biography is on pages 314 to 323 in volume II of Johnson’s English translation of Hemacandra’s work, Tri-ṣaṣṭi-śalākāpuruṣa-caritra.

The biographical data can be categorised in a standard manner, and includes numbers, which are significant in wider Indian culture. These standard details can also be used to identify individual Jinas in art, since they are usually depicted as stereotyped figures. Jinas are presented in either the lotus position or in the kāyotsarga pose. Both of these imply deep meditation.

A Jina’s mother has an important role because she gives birth to a future Jina, and in practice a Jina is often called ‘the son of X’. Another reason for her importance is that the names given to the various Jinas are said to originate either in pregnancy-whims or in a dream their mothers had, at least in Śvetāmbara sources. This dream is specific, and adds to the traditional auspicious dreams that foretell the birth of a child who will become a Jina. In the case of ‘Candraprabha’ – ‘Moonlight’ – it is reported in Śvetāmbara sources that his mother had a fancy to ‘drink the moon’ during pregnancy.

Candrapurī is the same as Candrāvatī – known nowadays as Chandravati or Chandrawati – a small village on the bank of the Ganges, 3 kilometres from Kādīpur railway station and about 20 kilometres from Varanasi.

The Vividha-tīrtha-kalpa, a 14th-century work on sacred places by the Śvetāmbara monk Jinaprabha-sūri, records the town’s:

The Śvetāmbara temple to Candraprabha visible today dates back to 1832. Although it is built on a mound 18 metres above the River Ganges, it has been often endangered due to floods. A Digambara temple was built close to it in 1856. 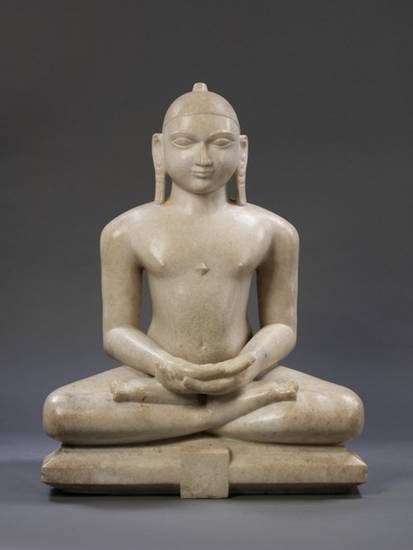 The birthday of Candraprabha is the occasion of an annual festival at the Śvetāmbara temple in Candravati.

There are also other numbers associated with the life of this Jina. 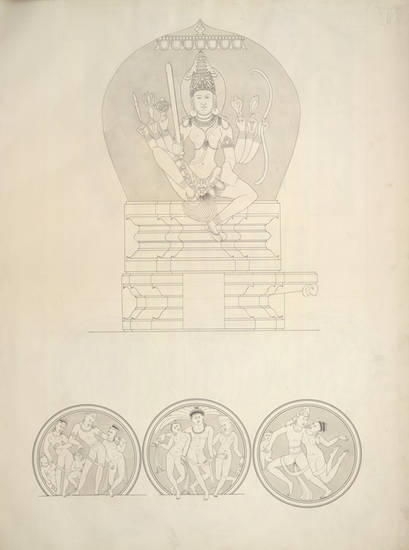 Jvālamālinī is one of the yakṣīs who has developed as an independent goddess among the Digambara sect, especially in south India. The legends and cult around her are rooted in Karnataka. The earliest image of her dates back to the 8th century and is found in the temple of Aihole in this region. The Jvālāmalinī-kalpa, a work representing the Jain tantric tradition, was written by Indranandi in the 10th century.

All of the princes who become Jinas are carried to the park where they perform the ritual gesture of initiation into monastic life – dīkṣā – on a palanquin. Candraprabha’s palanquin is named Jayantī. On this occasion, he is accompanied by one thousand kings.

He performs a two-day fast. The next day he breaks his fast at the house of King Somadatta in Padmakhaṇḍapura.

Candraprabha reaches omniscience under a tree of the nāga or punnāga variety. 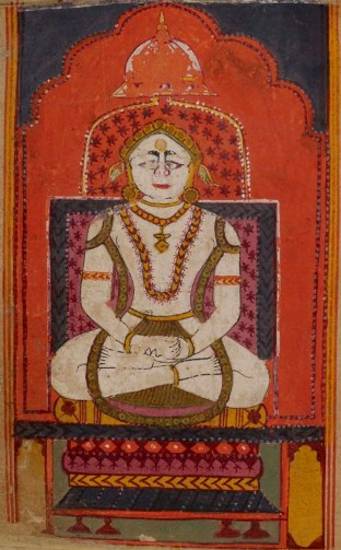 The extensive body of works dealing with Jain Universal History, such as the 12th-century Tri-ṣaṣṭi-śalākāpuruṣa-caritra by Hemacandra, describe the lives of the Jinas. Except for the major Jinas, the standard Śvetāmbara biographies in such works are not fleshed out with further events or stories. This is the case with Candraprabhanātha or Lord Candraprabha.

As with other Jinas, the standard account of Candraprabha is chiefly expanded and varied in the description of his former lives. These are set in the time before his last birth, when he is reborn as a prince who is initiated and then becomes a Jina. The number of these previous births is not fully standardised.

These previous lives act as the starting point for other stories that are recounted in the biographies of this individual Jina – the Candraprabha-caritras. These are written in Sanskrit, Prakrit or in modern Indian languages from western or south India. In prose, verse or in a mixture of prose and verse, these tales are composed by Śvetāmbara as well as Digambara authors.

There is no limit to the number of such works, but a good list is given on pages 19 to 20 in Pagaria 1999. An illustrated folio from Deva-sūri’s 1207 version in Sanskrit and Prakrit is reproduced in U. P. Shah, New Documents of Jaina Painting.

Similarly, Candraprabha is praised alongside other Jinas in hymns dedicated to the 24 Jinas. One instance is the devotional song dedicated to this Jina in the Gujarati set of hymns composed by Yaśo-vijaya in the 17th century. This example can be found among the manuscripts digitised on JAINpedia.

There are also several individual hymns dedicated to Candraprabha in all Indian languages. His moonlight complexion, which appropriately evokes serenity, seems to have made him distinct, as he shares this feature only with the ninth Jina. 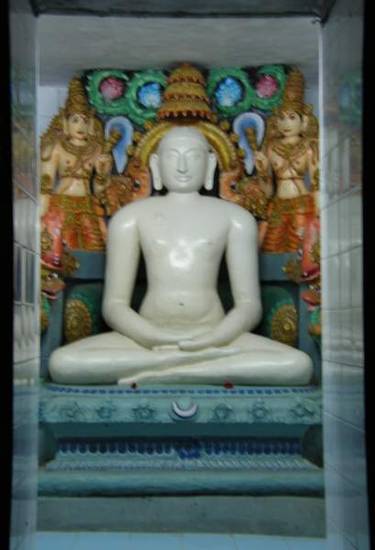 Image of CandraprabhaImage by Karine Ladrech © French Institute of Pondicherry

Sculpted images of Candraprabha are available from at least the 4th to 5th centuries CE in north India though they can be found in all areas of the subcontinent (Shah 1987: 142–144 gives several examples). The oldest available image from this period was installed by Mahārājādhirāja Gupta. The Jina is identified by name in the inscription, but no emblem is shown (Shah 1987: 142).

Among the temples to Candraprabha mentioned in medieval literary sources is the one in Somanātha-Pāṭan in Saurāṣṭra. The 14th-century Vividha-tīrtha-kalpa, Jinaprabha-sūri’s work on sacred places, also includes it. The same author also describes or narrates episodes relating to specific Candraprabha images.

An image of a Jina can be identified as Candraprabha if at least one of his two distinctive marks is shown:

Examples of depictions of Candraprabha in visual art are provided throughout this article and in the Related links.

Pictures 16 and 17 on this page show a Digambara statue of the eighth Jina, Candraprabha, and his yakṣa and yakṣī. The sculpture comes from eastern India and dates back to the tenth century.

The HereNow4U website provides text and pictures from Gerd Mevissen's lecture, 'North Bengal (Ancient Varendra): An Innovative Sub-Centre of Jaina Sculptural Art'. This was delivered on 7 March 2008 at the tenth Jaina Studies Workshop, on the theme of Jaina Art and Architecture, held at SOAS in London.

Information about the temples dedicated to Candraprabha in Chandrapuri in Uttar Pradesh is available on Jinalaya.com. The Śvetāmbara temple was built in 1832 while the Digambara temple was completed in 1856. The town is closely associated with the eighth Jina, who experienced four of his five auspicious events – pañca-kalyāṇaka – there.