Śreyāṃsanātha or Lord Śreyāṃsa is the 11th of the 24 Jinas of the present cycle of time. The word Jina means ‘victor’ in Sanskrit. A Jina is an enlightened human being who has triumphed over karma through practising extreme asceticism and teaches the way to achieve liberation. A Jina is also called a Tīrthaṃkara or ‘ford-maker’ in Sanskrit – that is, one who has founded a community after reaching omniscience.

Śreyāṃsa is not an historical figure. He is not singled out for individual biographies in the Śvetāmbara canonical scriptures. Treated like most of the other Jinas, he is provided only with basic biographical information. This information is fairly standardised and remains identical throughout later sources except for occasional variations, or confusions, in numbers.

The meaning of his name is not straightforward. Śreyāṃsa is based on the common Sanskrit word śreyas, meaning ‘better, superior, better’. Hence it has a positive moral connotation.

There are minor differences between the accounts and descriptions of this Jina among the two main Jain sects. According to Śvetāmbara biographies, Śreyāṃsa married princesses and governed the earth as a king before leaving worldly life for monastic initiation. According to the sect of the Digambara, none of the Jinas assumed the responsibilities of a householder or king before becoming monks.

Śreyāṃsa is one of the Jinas whose life is contemporary with a triad of great figures: 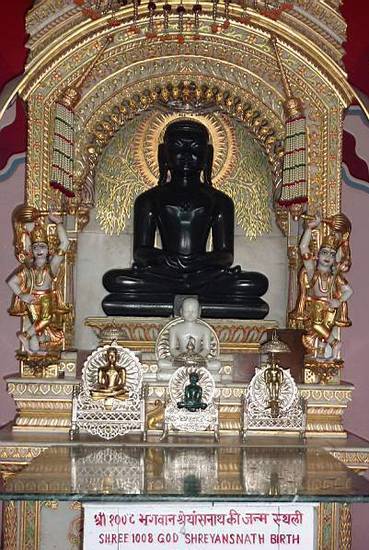 The standard Digambara biography of Śreyāṃsanātha or Lord Śreyāṃsa is found on pages 79 to 84 of the 1968 edition of Guṇabhadra’s Uttarapurāṇa in Sanskrit and Hindi. The standard Śvetāmbara biography is on pages 1 to 63 in volume III of Johnson’s English translation of Hemacandra’s work, Tri-ṣaṣṭi-śalākā-puruṣa-caritra.

A Jina’s mother has an important role because she gives birth to a future Jina, and in practice a Jina is often called ‘the son of X’. Another reason for her importance is that the names given to the various Jinas are said to originate either in pregnancy-whims or in a dream their mothers had. This dream is specific, and adds to the traditional auspicious dreams that foretell the birth of a child who will become a Jina.

In the case of Śreyāṃsanātha or Lord Śreyāṃsa, the standard biography of Hemacandra does not give any explanation, which is unusual. It is just said that ‘his parents named him Śreyāṃsa on a good day’, underlining the moral meaning of the word śreyāṃsa. In Prakrit, however, the form of the name is Sejjaṃsa. An early Prakrit commentary, the Āvaśyaka-niryukti, devotes half a verse to an explanation of each of the 24 Jinas’ names. It says: ‘he was called Sejjaṃsa because his mother had the pregnancy fancy to climb on a precious bed – sejjā’.

Siṃhapura is a part of Hirāmanpur, a small locality in Sarnath, about 30 kilometres from Varanasi in Uttar Pradesh. The 11th Jina is recalled several times across the whole area, as shown by three temples or large images.

The birth of Śreyāṃsanātha or Lord Śreyāṃsa is commemorated by annual festivals in Sarnath, which is the area traditionally connected with this Jina. 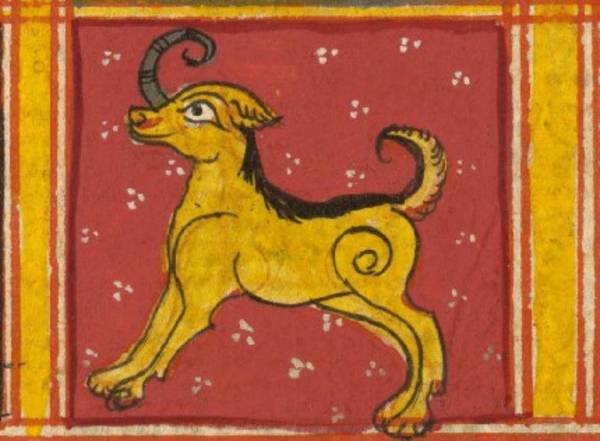 All of the princes who become Jinas are carried on a palanquin to the park where they perform the ritual gesture of initiation into monastic life – dīkṣā. The palanquin of Śreyāṃsanātha or Lord Śreyāṃsa is named Vimalaprabhā. On this occasion, he is accompanied by one thousand kings.

He performs a two-day fast. The next day he breaks his fast at the house of King Nanda in the town of Siddhārtha.

Śreyāṃsa wanders for two months as an ordinary ascetic and reaches omniscience under a tree of the aśoka variety. 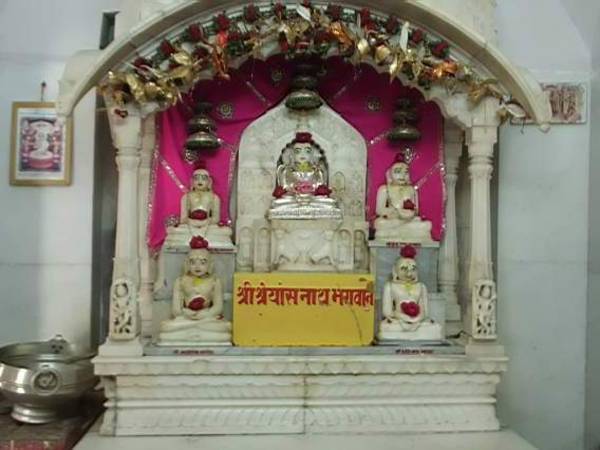 The life of Śreyāṃsanātha or Lord Śreyāṃsa is almost eventless. In the 9th-century Lives of the 54 Jain Great Men – Cauppaṇṇa-mahāpurisa-cariya – written in Prakrit by the Śvetāmbara monk Śīlānka, the chapter about the 11th Jina is hardly more than one page.

The 12th-century Sanskrit text Tri-ṣaṣṭi-śalākā-puruṣa-caritra, written by Hemacandra, has become the standard Śvetāmbara version of the Jinas’ lives. This text gives Śreyāṃsa’s life more substance because the story of the triad of Acala, Tripṛṣṭha and Aśvagrīva is inserted within the general frame of the story and told at length. As usual with such triads, it is a tale of war and fighting. The two main enemies are the Vāsudeva Tripṛṣṭha and the Prati-vāsudeva Aśvagrīva, whose hatred continues from their previous births.

Śreyāṃsa is mainly praised alongside other Jinas in hymns dedicated to the 24 Jinas. One instance is the devotional song dedicated to this Jina in the Gujarati set of hymns composed by Yaśovijaya in the 17th century. This example can be found among the manuscripts digitised on JAINpedia. 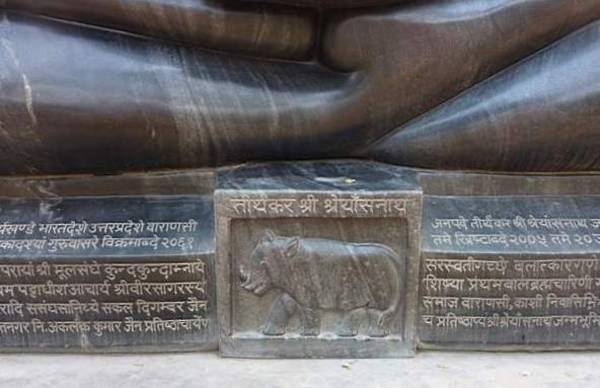 Śreyāṃsanātha or Lord Śreyāṃsa is not one of the most popular Jinas. Yet he is known through a number of stone sculptures, such as those:

Metal images showing Śreyāṃsa alone or with other Jinas are also available in temples and museums. 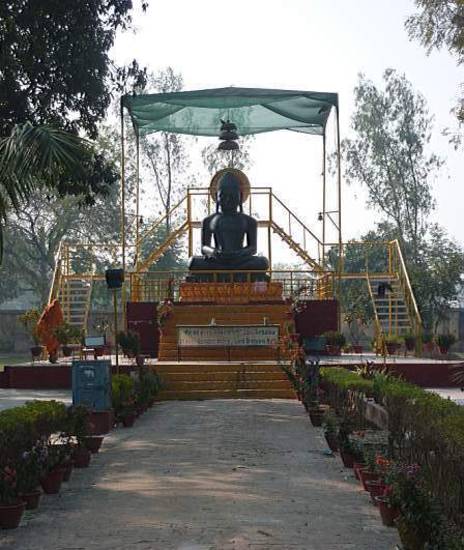 Today, the place where Śreyāṃsa’s presence is particularly visible is Sarnath in Uttar Pradesh. Near Varanasi, Sarnath is where four out of five auspicious events of his life took place and boasts several temples and images of the 11th Jina.

A Śvetāmbara temple dedicated to him is found in Hirāmanpur, a small village area on the outskirts of Sarnath. It was built in 1801 CE, at the instigation of the Śvetāmbara monk Jinakuśalacandra-sūri. The temple is in a large courtyard, used during festivals, and the main image there is of Śreyāṃsa.

To the south-east of the Dhameka Buddhist stupa, for which Sarnath is most famous, is a Digambara temple dedicated to Śreyāṃsa. It was built in 1824. The image is made of black stone and features the Jina’s emblem, the rhinoceros. The Jina is shown in a seated meditation posture. The interior walls were decorated with colour paintings executed in 1900. They have been recently replaced by new paintings with different themes. Photographs of the old paintings are kept at the temple. The original paintings depicted episodes from Śreyāṃsa’s life and representations of Digambara monks. The new paintings, on which the artist was working during January 2012, do not show any clearly Digambara features.

A gigantic statue of Śreyāṃsa sits in a garden on the side of the main street of Sarnath, opposite the entrance of the Buddhist stupa. Sitting cross-legged, the idol has been installed on a platform at the instigation of the leading Digambara nun Āryikā Jñānamati on 20 January 2005 on the occasion of the festival held in commemoration of this Jina’s birth and other auspicious events. It is made of black stone and features the rhinoceros at the base. To the right of this alongside the boundary wall are four mini-temples each dedicated to the four Jinas who are associated with the region of Varanasi, namely the:

Old images of this Jina and others connected with the region are found in the local museums of Uttar Pradesh, in Sarnath, Varanasi and Lucknow.