Ahimsa Day was invented by the British Jain diaspora and has been celebrated annually in London since 2002. Created to underline the universality of Jainism and to publicly identify it with the concept of non-violence, Ahiṃsā Day is marked by all Jains in the United Kingdom, though it is not officially recognised. It is added to traditional Jain religious festivals and is a new sign of the Jain presence in the UK.

Background to a new festival

British Jain citizens started coming to the UK in the 1970s, chiefly from Kenya and Uganda. The racial policies recently adopted in those countries led to the expulsion of the Indians who had settled there, many of whom had to leave with almost nothing. The first concern of many was to keep to the Indian traditional way of life – especially in the matters of food and marriage customs – they had preserved in Africa. As far as festivals were concerned, they celebrated Dīvālī like all Indians settled in the UK. Some Jains also celebrated Paryuṣaṇ,

The multiculturalist policies of the British government have encouraged ethnic and religious minorities to claim their identities as communities. Jains slowly became part of this trend as well. They developed community organisations for encouraging Jain religious practice and managed to arrange places for public worship. In addition, organisations such as the Institute of Jainology were created to assert the Jain presence beyond the Jain community itself. Its existence states that Jainism has something to say to non-Jains and that its values and heritage make it a faith as important as any other. 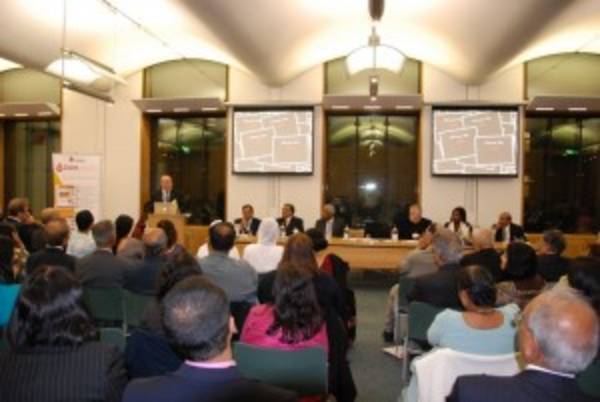 The annual Ahimsa Day spreads messages about the principles and history of Jain faith and the public visibility of the Jain community in the UK in several ways.

Firstly, its name emphasises the cardinal value for which Jainism is known all over the world – non-violence or ahiṃsā.

Secondly, it is not celebrated in a religious place but usually takes place in the House of Commons in London. The event involves Members of Parliament with large Jain communities in their constituencies. This underlines the recognition of Jainism as a faith by the British political establishment and the desire of the Jain community to reach non-Jains.

In its previous celebrations Ahimsa Day sometimes displayed a religious aspect, with Jain samaṇīs reciting the Panca-namaskāra-mantra. But this is not a routine element of the day, which is not a religious festival as such. It does not involve any ritual and is more like a meeting. During this non-sectarian event, which generally lasts for a few hours, invited speakers deliver speeches. They are generally social activists, people working in the field of education and Members of Parliament.

The speakers usually cover the concept of non-violence in general or discuss their own activities, showing how they are relevant to the development of non-violence. In 2010, for instance, an educationist showed how education and knowledge are crucial in increasing non-violence among individuals, since violence is often the result of envy and poverty.

Although the audience is mostly made up of British Jains who live in London, Members of Parliament often attend at least part of it. Reports occasionally appear in the Asian press.

Finally, Ahimsa Day takes place in October. As with traditional Jain festivals, its date is not fixed precisely. Traditionally, the dates of Indian festivals are determined by astrological considerations and the lunar calendar.

However, choosing October in which to hold this annual event has two main motivations. Ahimsa Day falls between the two most significant Jain festivals at this time of year – the Śvetāmbara festival of Paryuṣaṇ and Jain Dīvālī – and thus bridges the gap between them. Secondly, Ahimsa Day is celebrated near the 2nd October. This is the anniversary of the birth of Mahatma Gandhi, who embodies the concept of non-violence in modern India, and is a national holiday in India. Holding Ahimsa Day close to this day stresses both the principle of non-violence that gives the event its title and the Indian origins of the Jain religion. 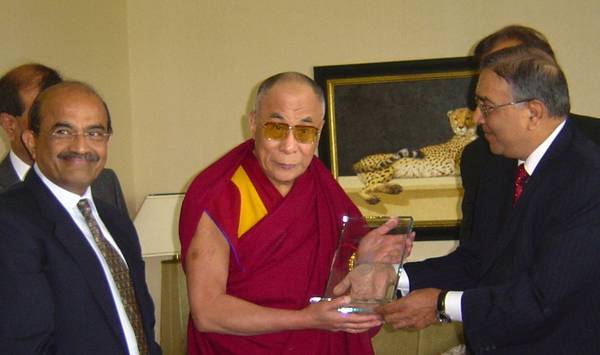 Each year the Ahimsa Award is given to someone who has spread knowledge of Jainism or promoted Jain principles such as non-violence.

Past recipients of the award are listed in this table.

The Institute of Jainology in the UK provides a report of the 2008 Ahimsa Day in London, held in Portcullis House, annexe of the House of Commons.

The Institute of Jainology in the UK provides an illustrated report of the 2009 Ahimsa Day in London, held in Portcullis House, annexe of the House of Commons.

The Institute of Jainology in the UK provides an illustrated report of the 2010 Ahimsa Day in London, held in the House of Commons.

The Institute of Jainology in the UK provides an illustrated report of the 2011 Ahimsa Day in London, held in the House of Commons. The theme was Climate Change and the Contemporary World. There are also links to the texts in PDF of some of the speeches and poems read out during the evening.

You will need Adobe Reader to open PDF files.