The Story of Yaśodhara is one of the most important Jain tales and has been passed down through the centuries in all the languages Jains have used. It is a good representative of religious teaching in narrative form – dharma-kathā. Its importance comes from the fact that it shows very clearly the working of karma and rebirth and refers to key concepts in these notions, such as violence – hiṃsā – both factual and intentional, and desire or greediness. Ultimately, all the protagonists will become pious Jains and will be emancipated.

In addition, the tale is interesting from a wider religious angle because it shows the rivalry between Jainism and Hinduism – or, more precisely, Śaivism – and their ways of worship. Another striking point is how frequently animals appear in the story -– as potential sacrificial victims or as possible forms of rebirths.

The story is eventful, colourful and sad or even gloomy in places. Human feelings and reactions are finely depicted through the various episodes, happy or unhappy, that make up life. All the ingredients for a vivid story are found in the tale of Yaśodhara. The tale has also inspired rich visuals, found in several illustrated manuscripts, all created in Digambara circles (Doshi 1985, Garg 1991).

The version composed by the Digambara poet Raidhū in the 15th century is one of the highlights of JAINpedia. Copies of the Jasahara-cariu, as it is known, are rare even in India so the manuscript held in the Wellcome Trust in London is a precious example, especially as this version of the story is not yet published. Even though it is not a complete manuscript and little is known about it, the Wellcome Jasahara-cariu showcases some fine paintings. Like other versions of the tale of Yaśodhara, the Jasahara-cariu is a major source of Digambara illustrated manuscripts. 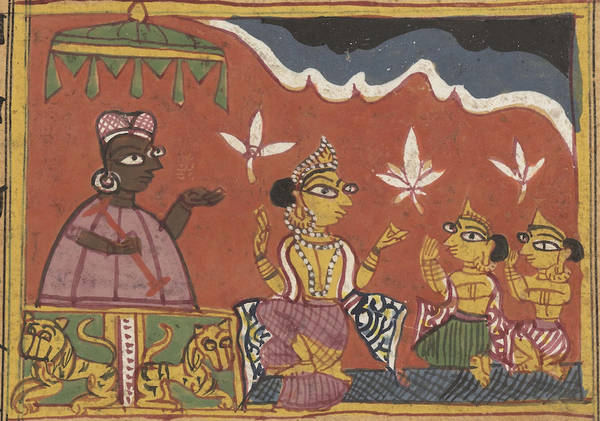 King Māridatta of Rājapura learns that a Śaiva ascetic called Bhairavānanda has reached his city. Bhairavānanda possesses superhuman powers so the king invites him to the palace and asks whether he could develop such powers.

The ascetic says he could, provided the king makes sacrifices to the goddess Caṇḍamārī, with offerings of a male and female of every living species.

The king assembles such pairs. However, when Bhairavānanda is about to start the ritual, he notices there is no human pair ready for sacrifice. The king dispatches his men to bring him a man and a woman.

It so happens that the king’s men come across a pair of young Jain ascetics, a boy named Abhayaruci and his twin sister, Abhayamati. They have come into the neighbourhood of Rājapura with a group of Jain monks led by Sudatta.

The men take the young ascetics to the temple of Caṇḍamārī to be sacrificed.

King Māridatta is intrigued by the noble behaviour of the two young ascetics and urges the boy to tell their story. He finally agrees to do so, telling all the episodes of their earlier lives up to the present one. Abhayaruci says that they are rebirths of King Yaśodhara and his mother Candramati.

In most versions of the tale, Abhayaruci narrates his previous births in the first person.

In Ujjayinī, the former king was Yaśogha or Yaśorha. He and his queen, Candramati, had a son named Yaśodhara. He becomes king after his father decides to renounce worldly life and become a monk. The young king’s favourite queen is Amṛtamati.

Amṛtamati falls in love with a hunch-backed elephant-keeper whose melodious singing has captured her heart. One night she leaves her bed to join her paramour, but the king follows her. He discovers the couple but does not reveal himself. Yaśodhara hears his wife tell her lover that she will pray to the goddess for her husband to die.

Yaśodhara is extremely disturbed but does not say anything. After that he cannot take any satisfaction in the pleasures of royal life. 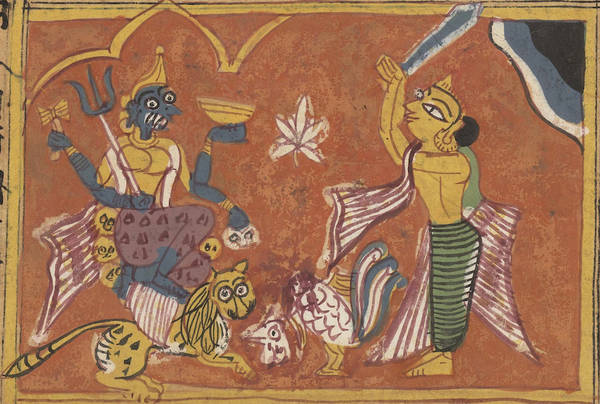 Yaśodhara goes to his mother Candramatī for help, saying that he wants to die because of a bad dream. He is about to commit suicide in front of her.

Candramatī promises to help by sacrificing a cockerel to the goddess Caṇḍamārī. Yaśodhara refuses this idea because he does not want to commit any violence.

Then his mother proposes making the sacrifice with a cockerel made of flour instead of a living bird. Yaśodhara accepts this suggestion.

They have a very lifelike cockerel made out of flour. Then they both go to the temple and perform the sacrifice. 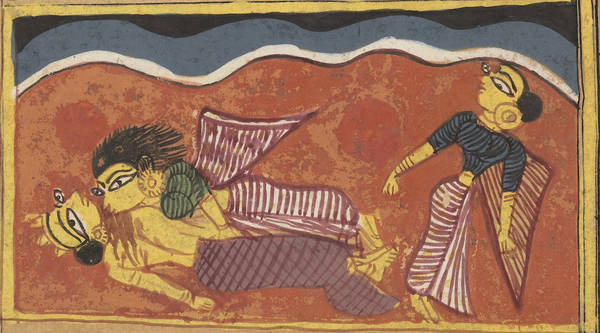 Yaśodhara is still full of disgust at his wife’s betrayal. He decides to give the kingdom to his son Yaśomati and renounce worldly life.

His wife Amṛtamati puts on a show of great sadness. She pretends that she will accompany her husband in entering religious life.

While Yaśodhara lies on the ground in agony, Amṛtamati throws herself on him, weeping as if overcome with grief, and kills him.

Unaware of how they have died, Yaśomati performs funeral rites for his father and grandmother and becomes the king. 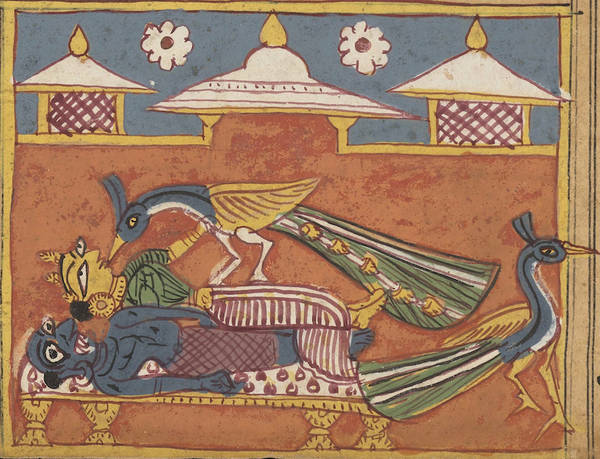 Sacrificing a flour animal is a sin because, even though it is not a living being, the worshippers treat it as one and thus they commit a kind of mental violence.

As a result of their shared sin, the souls of both Yaśodhara and Candramati endure several rebirths. To a large extent, these rebirths run in parallel and their past link continues over their new lives. In several cases, they also come across King Yaśomati, their son and grandson respectively, although they cannot identify each other.

One day King Yaśomati goes on a hunting expedition and on the way he passes a Jain monk named Sudatta. The king returns later without any game and again meets the Jain monk. Yaśomati concludes that the monk is a bad omen and sets his dogs to attack him. But the dogs stand still with their heads bent. The angry king then wants to kill the monk with his sword, but is stopped by a merchant devotee.

Yaśomati learns that Sudatta was a former king who has renounced the world to atone for the sin of punishing an innocent person. King Yaśomati is impressed and so ashamed of his behaviour that he wants to kill himself.

The mendicant guesses his thoughts and stops him.

Yaśomati then asks Sudatta where his father, mother and grandmother are.

The monk answers: “Your father, Yaśodhara, and your grandmother, Candramati, have been reborn as your children, Abhayaruci and Abhayamati. Your mother, Amṛtamati, has been reborn in the fifth hell, as a punishment for her vicious behaviour.”

King Yaśomati renounces the householder life and becomes a monk.

Abhayaruci and Abhayamati recall their earlier lives when they hear the monk’s words and faint. When they regain consciousness, they too want to become mendicants. But as they are very young Sudatta advises them to become junior mendicants – kṣullakas.

When Abhayaruci the young monk finishes his story, King Māridatta realises that he had been about to commit violence by the sacrifice he wanted to offer. The Śaiva ascetic Bhairavānanda has a similar reaction.

Both men give up their former styles of worship and decide to offer non-violence towards living beings. They take the vows of the Jain mendicant and become disciples of the monk Sudatta.

The story of Yaśodhara has been extremely popular for centuries among members of both major Jain sects and is found either as an independent tale or in collections of Jain stories.

It would be irrelevant and almost impossible to give an exhaustive list of all versions. The scholar Hiralal Jain listed 30 versions in 1972 and added: “I do not feel confident that my list is exhaustive”.

The table gives a representative selection of versions. 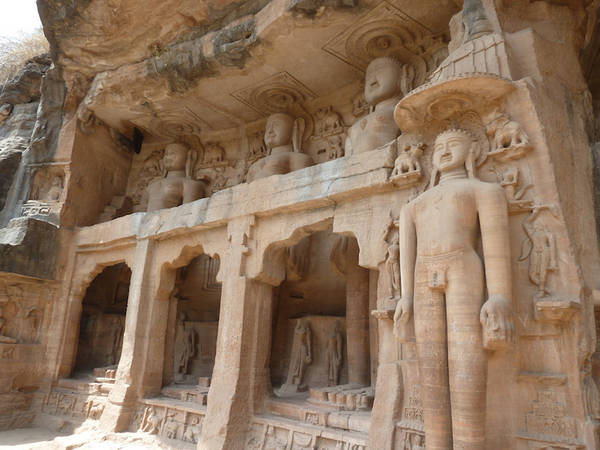 On JAINpedia, the story of Yaśodhara is represented by the Wellcome Trust manuscript Beta 1471, which has been fully digitised. It contains the version of the story by the poet Raidhū, called Jasahara-cariu. A Digambara Jain of the 15th century, when large parts of the subcontinent were under the Mughals, he mainly lived in Gwalior – in present-day Madhya Pradesh – in the reigns of the Tomara kings, Ḍūṃgarasiṃha and his son Kīrtisiṃha.

Raidhū is known to have supervised about 1500 carvings of Jain idols on the outer walls of the Gwalior fort. Raidhū was closely connected with the Jain authorities and prominent personalities. One of these was Hemarāja, whose name appears in the colophons at the end of each section of his poem on Yaśodhara. He was Raidhū’s childhood friend and a prominent Jain devotee who gained the title of sanghapati – ‘leader of the community’. A member of the Agrawal caste, he was one of Raidhū’s protectors.

Raidhū wrote numerous narrative and didactic poems, mainly in Apabhraṃśa, a late form of Prakrit used extensively by Jain Digambara authors from the ninth century onwards. At the time Raidhū wrote, India was under Islamic control, yet the languages used were forms of the modern languages of northern India such as Old Hindi, Old Rajasthani or Old Gujarati. But Apabhraṃśa was still a literary language favoured by poets and scholars.

Raidhū’s version of Yaśodhara’s story is known by the title Jasahara-cariu, which means ‘the story of Yaśodhara’ in Apabhraṃśa. It has the subtitle of ‘having the characteristic of compassion’ – daya-lakkhaṇa. This underlines the main teaching of the story, which is a manifesto against violence of all types and a defence of non-violence.

The text is divided into four sections called sandhi and covers all the episodes described above.

Coming after so many authors who reworked the story of Yaśodhara, it is to be expected that Raidhū is indebted to his predecessors. The one to whom he owes the most is the tenth-century writer Puṣpadanta, who also composed in Apabhraṃśa.

The text of the Jasahara-cariu has not yet been published, but its contents have been analysed by the Indian scholar Rāja Rām Jain. He is a specialist in Raidhū, editing and translating several of his works and devoting an extensive study in Hindi to Raidhū’s writings (Jain 1974: 348–361; 608–611).

Few manuscripts of this work seem to be known. Jain could use only two for his 1974 publication – one from Jaipur and another one owned by the Ailak Pannalal Digambar Jain Sarasvati Bhavan in Beawar, Rajasthan. The latter was completed in Ahmedabad in 1712 CE. Both manuscripts are illustrated and represent different pictorial traditions. The Jaipur manuscript has 63 pictures, and the Beawar one 70. Some were used by Doshi (1985) and Garg (1991) but none has been analysed and described thoroughly.

Under these circumstances, the Wellcome Trust manuscript is a rarity – indeed, it is unique outside India. It is all the more regrettable then that it is not complete, in that:

The manuscript has 34 illustrated pages whereas its complete form is likely to have had roughly double that number. The Beawar manuscript has a total of 70 and the black and white reproductions in Jain (1974) show that its style is very close to that of the Wellcome Trust manuscript. 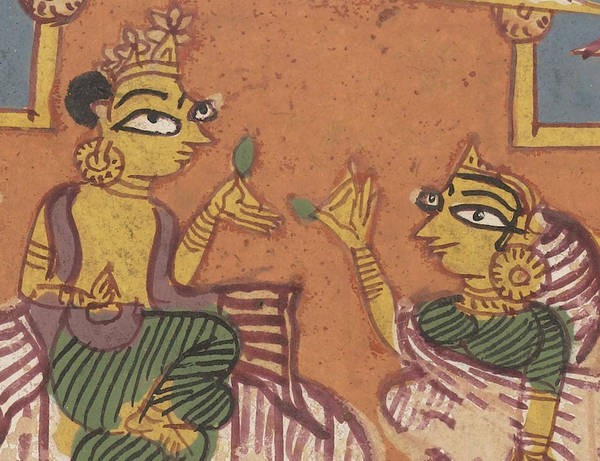 The Story of Yaśodhara is one of the most important sources for Jain illustrated manuscripts created by Digambaras. However, the style of art depends on the region and on the time the paintings were completed.

There is no date for the incomplete Wellcome Trust manuscript, but it is likely that it goes back to the 18th century, like the Beawar manuscript which is so close in style. Both have colourful and lively scenes, where the figures are proportional and realistic.

A zoomable manuscript painting in the Los Angeles County Museum of Art shows the Jain monk Sudatta receiving King Yaśomati. This 17th-century folio from a manuscript of the popular Jain tale Story of Yaśodhara has a picture of a royal procession on the verso side.