The rite of anointing the statue of Bāhubali or the Mahā-mastakābhiṣeka – ‘Great head-anointing ceremony’ – is one of the most spectacular Jain festivals today. It is associated with a specific image, the colossal statue of Gommaṭeśa Bāhubali, and has become identified with one particular holy place, Shravana Belgola in Karnataka. The statue there is also known as Gommaṭeśvara or ‘Lord of Gommaṭa’. The ceremony to ritually anoint the huge idol takes place every 12 years. The rite has developed into a month-long festival, in which the ten-hour rite takes place halfway through the celebrations. The next ceremony is due to take place in 2018.

Such anointing rituals are performed on other monumental images of Bāhubali, which have been erected elsewhere in South India. These primarily involve the Digambara Jains but attract sometimes immense crowds, comprising Jains of all sects and non-Jain tourists. These events are supported by the state government and even the central Indian government. Media interest has grown as the festival at Shravana Belgola has developed in size and spectacle. 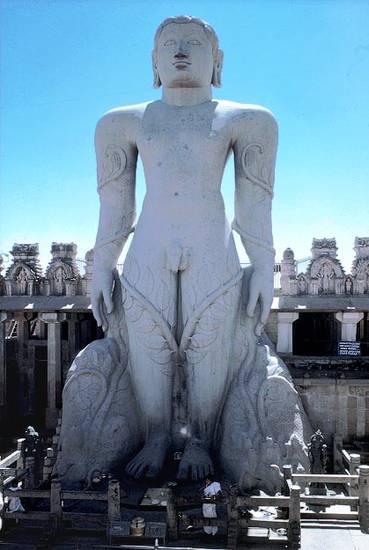 A ‘head-anointing ceremony’ – mastakābhiṣeka – is a rite performed for any Jain image. Sanctified fluids are poured over the head of the statue, accompanied by a mantra or hymn. The sacred bath – ābhiṣeka – is at the centre of all Jain image rituals and can be performed daily in the morning ceremony or during festivals and pilgrimages. It is another name for the pañcāmṛtābhiṣeka – ‘bathing of the image with five liquids’. These five fluids are:

Using these products implies that it is a costly ceremony performed more on special occasions than on a daily basis.

When this ritual bathing is performed with special grandeur and solemnity it becomes a ‘great head-anointing ceremony’ – mahā-mastakābhiṣeka. It then takes place only under certain infrequent astrological conditions, which usually occur around 10 to 15 years apart.

This ritual bathing of the idol was part of the consecration of the huge Bāhubali image erected on the hill of Vindhya-giri at Shravana Belgola in Karnataka in 981 CE. The statue was carved at the instructions of Cāmuṇḍarāya, general to King Rājamalla IV.

According to legend, mendicants poured the five holy liquids from many hundreds of pots while perched on scaffolding set up above the head of Bāhubali. But because the liquids were poured from above, they could not flow below the waist of the statue and the full bath from head to toe could not be completed. Then the local guardian goddess Kuṣmāṇḍinī appeared in the guise of an old poor woman, carrying the five fluids in a tiny pot. She claimed that she could succeed in doing what Cāmuṇḍarāya had failed to accomplish. This she did and thus the first full ritual lustration of the statue was performed. Legends identify this woman with Gullikayiji, a female devotee, whose reward for the miracle was to have her image erected opposite the colossal statue, outside the door of the enclosure.

In practice this grand festival has become associated principally with the Bāhubali image in Shravana Belgola. However, the ‘great head-anointing’ rite is also performed on other colossal Bāhubalis that have been erected in Karnataka and elsewhere.

Stages of the ritual 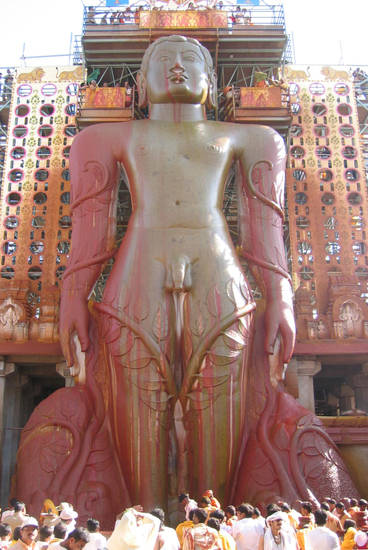 Reports of the 1887 ceremony (Sangave 1981: 98) at Shravana Belgola outline the main features of the celebration. The climax of the festival is the Great Head-Anointing but this rite falls in the middle of a month of celebrations. Thus a vibrant atmosphere of continuous worship and joy pervades the place for at least one month, with crowds of pilgrims flowing incessantly to the site.

On the day itself, people begin to climb the steep Vindhya-giri hill as early as possible so they can secure good places to watch the spectacle. Large numbers of brightly dressed women and girls carry pots for the rituals.

At the top of the hill, opposite the idol, an area of 40 square feet is filled with bright yellow paddy, an auspicious and holy substance symbolising fertility. On this area 1,008 tiny pots – kalaśas – of holy water are placed, covered with coconuts and adorned with mango leaves. The pots are arranged in the form of a diagram found in the manuscript of a ritual manual from 1881 (Doshi 1981: 59).

Above and behind the image is a scaffold on which stand the priests or lay people who have the right to perform the ritual bathing of the statue. They carry pots filled with milk, ghee and the other ceremonial liquids.

When the master of the ceremony gives the signal, they all pour the contents of their vessels simultaneously on the head of the image. The holy liquids are poured over the statue one after another, so that bright colours flood down over the stone in spectacular waves.

The ritual bath is repeated later in the day. Again, the celebrants pour the fluids in the thousand pots on the image at the same time.

In the final anointing of 1887, 15 different substances were used:

Devotees vie with each other to stand at the feet of the statue, where they are drenched in the holy liquids. At the close of the ritual, pilgrims gather up the petals, seeds and other ceremonial substances that have reached the ground, as these have gained spiritual significance after being used in the anointing.

All the ceremonial events are accompanied by loud instrumental music, hymn-singing, reciting of prayers and readings of scriptures, punctuated by shouts of joy and victory honouring Bāhubali. This Jain festival is marked by exuberant collective celebration in an atmosphere of highly charged emotions and a wealth of colour, smells and sounds.

Records of past celebrations

Nowadays, the interval of 12 years between two ‘great head-anointing’ ceremonies has become more or less regular. However, this was not always the case as there are written records praising monks or kings who take part in the lustration of the Shravana Belgola Bāhubali, from the end of the 14th century onwards (Sangave 1981: 97–99 and Jain 2005: 15–16 provide a full list of years). Monks perform the ritual, while kings sponsor and eventually perform it.

Such records are irregular up to the 19th century, but since then regular descriptions of ceremonies have made them a valuable source. For instance, an inscription from Shravana Belgola records that a ‘head of the body-guard police, who was a descendant of Cāmuṇḍarāya, died on the day of the head-anointing festival of Gommaṭeśvarasvāmī’ in 1827. As a result, his son gave an endowment for the annual conduct of worship and other services for Gommaṭeśvara by the Maṭha there (Epigraphia Carnatica Number 324/223: 459). A ‘great head-anointing’ ceremony took place in 1871 while press reports indicate that Lakṣmīsena Bhaṭṭāraka of the Kolhapur Maṭha in Maharashtra performed the ritual on 14 March 1887. This particular event attracted 200,000 pilgrims from all parts of India.

Celebrations in the 20th century

Throughout the 20th century the Great Head-Anointing ceremony at Shravana Belgola tended to follow more regular intervals. Each celebration was the occasion for some novelty or special event to promote Jainism.

The ceremony on 30 March 1910 saw a special session of the All-India Digambara Jaina Mahāsabhā, which agreed to work towards the promotion of education of Jain children.

A committee set up to publicise the festival beyond Karnataka invited people from all over to undertake a pilgrimage to Shravana Belgola for the ceremony of 1925. The ritualtook place on 15 March. The Maharajah of Mysore participated in the festival and delivered a speech highlighting the contribution of the Jains to the culture of Karnataka. The Jains regard this speech as memorable (Sangave 2001: 101–102).

The 26 February 1940 ceremony inaugurated a change, still valid today, in the management of the festival. The All-India Digambara Jain Tirthakshetra Committee handed over organisation to the Mysore city government. Today the State Government of Karnataka is responsible for organising the festival.

On that occasion the 1008 pots were divided into four categories:

An auction system was established, in which the person who bids the most earns the right to pour liquids from a given pot. The money raised is used for the protection and upkeep of the Bāhubali image. This system is still used today.

The ceremony on 5 March 1953 was jointly organised by a religious committee and a general committee. That time half of the 1008 pots were made of gold while silver was used for the rest. About 300,000 pilgrims participated in the festival, which was an occasion for many Jain associations to hold special meetings.

The ceremony on 30 March 1967 saw the presence of a large number of Jain monks and nuns. The chief minister of Mysore replaced the maharajah. An innovation that many considered spectacular was the Indian Air Force helicopter that showered multi-coloured flowers on Bāhubali from the sky, greatly exciting the spectators and participants. For the first time, the government of India filmed the entire celebration, as some foreign television channels also did. Parallel to the rituals, Jain meetings and sessions were held, in which resolutions were passed to encourage the academic study of Jainism in universities. 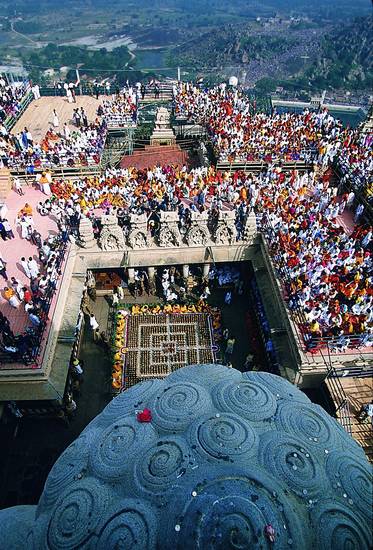 Over the course of the 20th century, the celebrations surrounding the Great Head-Anointing became increasingly spectacular. The 1981 and 2006 occasions have demonstrated even greater sensory stimulation and passionate emotions. Media coverage has grown in tandem with the size and grandeur of each new celebration. Media interest peaked in 2006, with international news organisations covering the biggest festival so far.

The current bhaṭṭāraka of the Jain maṭh, the most prominent temple in the town of Shravana Belgola, is Karmayogi Swasti Shri Charukirti Bhattarakaji. His leadership has been one of the chief forces behind the development of Shravana Belgola as one of the principal Jain pilgrimage sites and general tourist attractions in the last 40 years. He personally supervised the organisation of three rituals, those in 1981, 1993 and 2006.

The date of 22 February 1981 marked the millennial anniversary of the installation of the colossal statue on the hill of Vindhya-giri and thus was especially prestigious. Preparations for the festival were made on an unprecedentedly grand scale. The government of Karnataka provided 50 million rupees to fund the celebrations. Improvements in the infrastructure and development of Shravana Belgola were made. The Digambara monk Muni Vidānanda Mahārāj supervised the ceremony. For the first time the Indian Prime Minister, Indira Gandhi, attended the celebrations, together with other ministers of the central government and the chief ministers of the Indian states. The 1008 pots were divided into eight groups set at different auction rates, thus bringing in unmatched amounts of money. The novelty was the scheme known as Jana-Mangala Mahā-Kalaśa Pravartana. This involved placing an eight-foot-high holy urn made of copper on a decorated chariot to accompany Jain pilgrims. Officially setting off from Delhi, the urn went with the pilgrims on their five-month journey through 110 towns, “spreading the message of humanity, love and peace of Lord Bāhubali, who was the symbol of Indian culture which believed in tolerance, non-violence and national integration’.

The last celebration of the 20th century took place on 19 December 1993.

The latest Great Head-Anointing ritual took place on 9 February 2006 and was given special prestige as being the first of the 21st century. The ten-hour ceremony of 2006 showed some innovations in the substances poured over the statue, as some descriptions show:

Coconut milk, sugar cane juice and milk were poured over the figure. At first resembling smoke, rice flour was released from above and drifted in large white clouds over statue and onlookers alike. This was followed by yellow turmeric paste and other herbal liquids, interspersed by the contents of large silver kalaśas, filled with sanctified water. Visually particularly striking were a variety of sandal wood mixtures in shades ranging from light brown, via purple to deep red, which coloured the grey stone of the sculpture. Towards the finish of the anointing ritual, at the end of the afternoon, a shower of strongly scented flower buds and petals of diverse colours were released from baskets, and a garland was ceremoniously raised to decorate the monumental image. A mixture of holy substances, known as indra, concluded the anointing ceremony, followed by the performance of āratī, the rotating of a flame in front of the image