Rājacandra (1867–1901) occupies a very special place in Jainism as a mystical poet and reformer. Though a jeweller by trade, he dedicated his short life to the realisation of the self through a deep knowledge of the Jain scriptures and principles, and through a profound direct experience. Rājacandra was gifted with rare powers of concentration but decided to stay a householder instead of becoming a monk.

Influenced by his important writings, his followers revere him as a saint and claim Rājacandra as the founder of a new path in Jainism, neither Śvetāmbara nor Digambara.

Rājacandra’s life is known from two main types of sources. His own diaries and letters offer some information about his life. The writings of his disciples tend to idealise him and his activities. 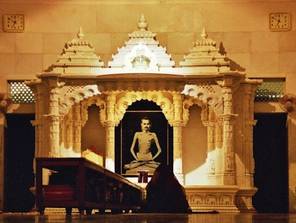 Rājacandra was born on 11 November 1867 in Vavania, a small but busy port in the Saurashtra region of Gujarat. His father, Ravjibhai Mehta, was a vaiṣṇava businessman, and his mother, Srimati Devbai, was a devoted Śvetāmbara Jain.

His birth name was Lakshminandan. The name Raichand was given to him by his parents when he was four years old. It means ‘royal moon’. The term ‘moon’ is used as a comparator for beauty while raja or rai can be read as a superlative. This was later changed to the Sanskrit form Rājacandra while Śrīmad was added by his disciples after he died. ‘Śrīmad’ is an honorific title used as a prefix before the names of eminent persons in Indian culture.

Rājacandra’s early childhood was marked by a famous episode in which he remembered his previous existences – jāti-samaraṇa-jñāna. One of the best-known events of his life, it has even been the subject of children’s cartoons.

Amichand, a neighbour and friend of the family, died suddenly from a snake bite when Rājacandra was around seven years old. The boy asked his grandfather what had happened to Amichand. His grandfather was embarrassed by this direct question at first, then he said that Amichand was dead, which means that he could not speak, walk or move in any way. He told the child that Amichand’s body would be burnt at the cremation-ground.

Young Rājacandra climbed on a branch of a tree and saw the body burning in the funeral pyre. He asked himself why people were so cruel as to burn the body of such a beloved man. He was very confused. Rājacandra concentrated, trying to understand what was happening, and then the curtain was lifted on his previous births.

This intense experience was repeated later when he was visiting the fort in Junagarh. It helped the young boy decide to live a life in which renunciation featured strongly. 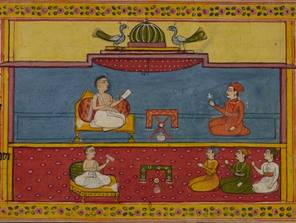 From an early age Rājacandra was attracted to spiritual considerations, especially to the notion of seeking the self – ātman – and living a life of renunciation – vairāgya.

Rājacandra spent a large part of his childhood talking with monks and lay men about the religious aspects of life. Most residents in Vavania were merchants – vaṇik – among whom were some Jains. Rājacandra often visited both the local vaiṣṇavaashram and the Jain upāśraya, making little distinction between them at the beginning. Then his contacts with the Jain world became more frequent. Monks advised him to read important texts such as the Pratikramaṇa-sūtra. In particular, the scriptures’ emphasis on humility and respect for all living beings touched the heart of the thoughtful young man.

The child Rājacandra demonstrated rare intelligence and unusual powers of concentration. His memory was phenomenal – a lesson read was a lesson learned by heart. He learned mathematics very easily and started writing poems at an early age. He could do many things at the same time, such as discussing various subjects, playing different games, reciting many texts. The boy could not only do eight things at once – aṣṭāvadhānī – which is a pandit quality, but it is said that he could do a hundred things at once – śatāvadhānī. Articles report how he displayed his powers of memorisation and concentration to an audience in Mumbai. However, Rājacandra stopped these public performances, which did not suit his spiritual leanings.

Like the son of any merchant at that time, an important part of Rājacandra’s childhood was dedicated to learning about his father’s business.

When his apprenticeship as a merchant was finished, Rājacandra became a jeweller. Evidence shows he was an excellent and conscientious professional, who showed integrity. He always observed the vows of Jain lay men, such as not lying about his goods and not stealing customers.

At the age of 21, Rājacandra married Zabakbai, the daughter of a jeweller. They had four children together. Rājacandra talked of a middle position regarding his marriage, in which to be married brings neither joy nor sorrow. This would be the ideal of detachment.

Rājacandra remained fixed on self-realisation even though he had the responsibilities of a job and family.

Zabakbai belonged to a Zaveri merchant family, who saw in Rājacandra a very special intelligence. They wanted him to build up the business so he went to Mumbai to start his business career. 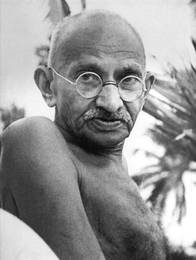 The young lawyer Mohandas Gandhi had just come back to India from London and was on his way to South Africa. Although both Rājacandra and Gandhi had been born in Gujarat, they met in Mumbai, in Maharashtra.

Rājacandra greatly influenced Gandhi throughout his life. His teachings directly inspired the concept of non-violence – ahiṃsā – which Gandhi used so effectively during the fight for Indian independence. ‘In my moments of spiritual crisis, he was my refuge’ wrote Gandhi about his friend.

Gandhi called an entire chapter of his autobiography ‘Raichand-bhai’ – meaning ‘Raichand Brother’ – and devoted it to describing his first meeting with Rājacandra:

The thing that did cast its spell over me I came to know afterwards. This was his wide knowledge of the scriptures, his spotless character, and his burning passion for self-realisation. I saw later that this last was the only thing for which he lived 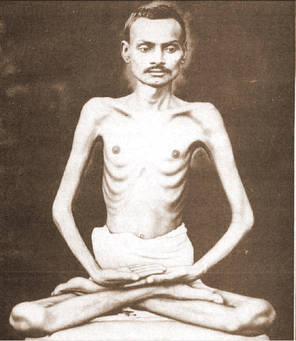 In the later part of his life, Rājacandra preferred to stay away from Mumbai, living with his disciples and friends in Gujarat. He spent a year in Idar in Jain circles, teaching during meetings, and testing his intellectual and spiritual faculties with seven veteran monks.

When Rājacandra was 34, some monks invited him to take the vows of an ascetic but, though he had attained high levels of spirituality, he decided not to. He preferred to be a lay man who had attained samādhi within the constraints of secular life, acting as an example to the lay community.

By 1900 his health was deteriorating. When he was staying in Dharampur, Gujarat, his strength ebbed away as he became extremely thin and weak. On 9 April 1901, Rājacandra passed away in Rajkot, Gujarat, surrounded by family, friends and close disciples.

Rājacandra left numerous writings. Starting in his childhood, while in his shop and the different ashrams where he lived at different times, he had written throughout his life. His writings took the form of letters to friends, a diary, poems, and religious and philosophical treatises, all in Gujarati.

Composed within three days when Rājacandra was 16, the Mokṣamālā offers lessons in gaining philosophical knowledge and practising ‘right conduct’ according to the Jain way of life.

The text is written in such simple language that everyone can read it, including children. The text features 108 lessons in a rosary of 108 pearls, each dealing with the main principles of Jainism. These discuss:

They advise how to act with right conduct in daily life. 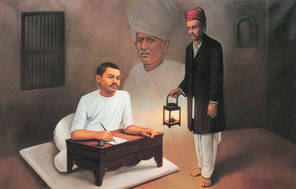 The main treatise Rājacandra composed at the end of his life is the Ātma-siddhi – Realisation of the Self. Again, the language used is simple Gujarati that Hindi-speakers can read easily. The text invites the voluntary seeker of self-realisation to know the true nature – svarūpa – of the Self, with the help of a true master – sad-guru.

Rājacandra describes the devout person attached to his ritual practices in an empty display of ceremony, in opposition to the true seeker of the Self. Then there are six discourses, following the traditional Indian literary model where a master refutes a disciple’s objections:

At the end of the arguments, the disciple thanks the master for having achieved this state of awakened spirituality and sings his enthusiasm for having reached this state himself.

The Ātma-siddhi is a very popular text and has inspired singers such as Shefaliben Shah, who has composed a musical version of the text like an Indian devotional song. The first English translation of many was by J. L. Jaini in 1923. Another famous translation was published by Brahmacārī Govardhandās in 1957.

Rājacandra was inspired by previous authors such as Kundakunda and by the Digambara mystical tradition and he himself inspired numerous followers of all Jain sects. Many places dedicated to Rājacandra, such as temples with pictures and offerings, can be found in India, mostly in Gujarat and Mumbai.

The disciples of Rājacandra are associated with the Rāj Bhakta Mārg, which means ‘Path followed by the devotee of Rājacandra’. Followers are mostly lay men, as was Rājacandra himself. They base their faith on images of Rājacandra and writings mostly gathered after his death. The images are based on photographs taken in a studio that represent him in a posture of meditation.

In 1920 Rājacandra’s closest disciple Laghurāja set up an ashram in Agās, near Anand. A few kilometres south of Ahmedabad in Gujarat, the ashram is a very peaceful place surrounded by beautiful trees. A statement on the main gate tells guests: kṣamā eja mokṣaṇo bhavya-darvāze che – ‘Forgiveness is the grand gateway to Liberation’.

Behind this gate sits a large lecture hall along with two small temples, a Śvetāmbara one and one for the Digambaras. At a distance from these buildings is the Rāj-mandir, a huge hall with impressive portraits of Rājacandra and Laghurāja. Inscriptions on the walls declare Rājacandra’s spiritual statements and invite his followers to observe properly the vows of Jain laity.

Laghurāja stayed at the ashram from 1920 to 1936 and instituted a daily routine that today’s followers continue to respect.

Rāj Bhakta Mārg – the path of devotion to Srimad Rajcandra: a Jain community in the twenty-first century
Emma Salter
PhD dissertation submitted to University of Wales in 2002

This 2008 cartoon on YouTube shows the central episode in the childhood of the 19th-century poet and reformer Śrīmad Rājacandra. Following the death of a family friend, seven-year-old Rājacandra remembered his previous existences – jāti-samaraṇa-jñāna.

The shrimadrajchandra.org website is a Gujarati site run by Dinesh D. Mehta.

Song versions of the Ātmasiddhi

One of the most influential works of the 19th-century poet and mystic Śrīmad Rājacandra is the Ātmasiddhi (Realisation of the Self). The Atmadharma website offers MP3 audio files of different singers singing the Ātmasiddhi in the original Gujarati and in Hindi. In the traditional bhakti devotional style, the music can be downloaded or listened to online.

Established in 1920 by Rājacandra’s closest disciple Laghurāja, the Shrimad Rajchandra Ashram is in Agās, Gujarat. The ashram publicises the teaching of Rājacandra and welcomes visitors to study and pray.

This 2009 video on YouTube is a tour of the Shrimad Rajchandra Ashram, in Agas in Gujarat. Established in 1920, it is dedicated to the teachings of Śrīmad Rājacandra, a 19th-century mystic, poet and reformer. The video takes the viewer from the sign outside the main gate through one of the two temples on the site to the lecture hall, which displays photographs of and quotations from Rājacandra.

A Pinnacle of Spirituality

A Pinnacle of Spirituality: the Inspirational Life of Shrimad Rajchandra. Written by a follower of Śrīmad Rājacandra, the book tells the life story of the 19th-century mystic, writer, and provides quotations from Gandhi on his friend Raichandbhai. A. Pinnacle of Spirituality was created in 2001 as part of a series of events to mark the century since Shrimad Rajchandra’s passing away and was translated from the original work in Gujarati by Dr Kumarpal Desai. The online English version and down loadable Gujarati version is available on the Shree Raj Saubhag website.