The Sthānaka-vāsin are a specific sectarian tradition of the Śvetāmbara Jains which includes monastic orders and lay followers. They are found mainly in Gujarat and in the Hindi- and Punjabi-speaking areas of North India.

The word Sthānaka-vāsin literally means ‘hall-dweller’ in Sanskrit and should be understood as being the opposite of mūrti-pūjaka or ‘image-worshippers’. A ‘hall’ here is an empty building, contrasted with temples where images of the Jinas are housed and worshipped. First found in a text written in 1630, the term ‘Sthānaka-vāsin’ became regularly used only at the beginning of the 20th century. The Sthānaka-vāsins are sometimes considered to be ‘protestant’ Jains.

A lay man founding a reform movement is remarkable because mendicants usually start reforming factions. As a copyist of Jain scriptures for monks, Loṅkā read the texts himself and looked at the behaviour of the ascetics around him. He made some observations on the oldest Śvetāmbara scriptures, which proved the starting points of his reform. He found the following things were not in the holy texts:

According to Loṅkā, strict asceticism and total non-possession are the key words of the scriptures. Asceticism is made up of practising non-violence, self-restraint and penance. Therefore he denounced the legitimacy of the existing Jain sects that were in favour of image-worship, and started to follow the oldest textual prescriptions himself. Though he lived as an ascetic, he had not been initiated by any mendicant so he formed his own group.

There are few reliable sources on Loṅkā, partly because rival groups suppressed information about him. But there is overall agreement that Loṅkā:

The Loṅkā-gaccha – ‘Loṅkā’s monastic order’ in Sanskrit – was not founded by Loṅkā himself, but by his first disciple, Bhāṇa, who initiated himself and 45 followers of Loṅkā’s doctrine. This happened some time between 1471 and 1476. The new Loṅkā-gaccha took the ‘five great vows‘ – mahā-vrata – of the Jain monks and nuns.

From the 16th century until the 19th and 20th centuries, the history of the order is that of successive splits creating many subgroups. Most of them comprised an intermediate category of lay-ascetics called yati, who did not accept all of the monastic vows and returned to worshipping images.

The tradition now known as Sthānaka-vāsins derives from five monks who separately split from different lines of the Loṅkā-gaccha tradition during the 16th and 17th centuries. 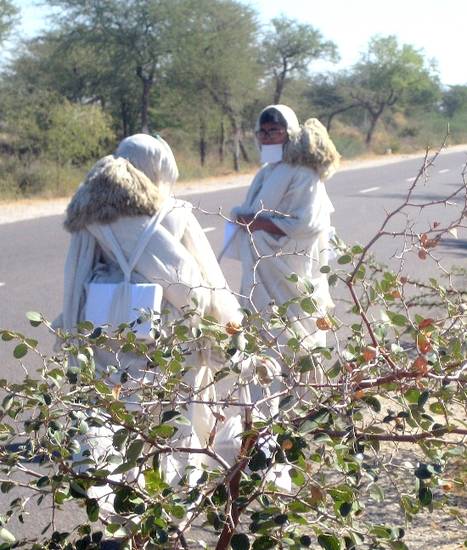 The Sthānaka-vāsin monks and nuns are split into numerous groups, mainly on account of historical, doctrinal and regional differences they think cannot be overcome. There were unsuccessful attempts at promoting unity before the Śramaṇa-saṅgha was founded in 1952. This still unites the majority of the Hindi-speaking Sthānaka-vāsin orders.

At present, there are 26 mendicant orders, which have a very complex history. Their origins can be traced to one or more of the five principal reformers – pañca munis – of the aniconic Jain tradition.

First is Jīvarāja, who was probably born in Surat in Gujarat and lived some time between 1524 and 1641. Some Sthānaka-vāsin scholars believe that he launched the innovations that are crucial to Sthānaka-vāsin identity:

The second main reformer is Dharmasiṃha (1599–1671), who founded the Āṭh-koṭī or ‘Eight Class’ tradition. He was a scholar and wrote Gujarati commentaries – ṭabo – on the Prakrit scriptures. He introduced a special pratikramaṇa rites for his lay followers and taught that there is no accidental death, because the life span of a living being is determined by its karma.

The third reformer is Lava or Lavjīṛṣi (circa 1609–1659), who was also born in Surat. He is the founder of the Ḍhuṇḍiyā or ‘Seeker’ tradition. According to their mūrti-pūjak opponents, this name comes from the early mendicants, who looked for other accommodation rather than stay in buildings in temple grounds used by mendicants from Śvetāmbara mūrti-pūjak sects. Sthānaka-vāsins interpret the word as a term for those mendicants who seek the true path of salvation.

Fourth is Dharmadāsa (1645–1703), who also founded his own tradition. He initiated himself in 1660, launching the Bāīstolā or ‘Twenty-Two Schools’ group.

Lastly, Hara created his own branch of Sthānaka-vāsin mendicants in 1668 or 1728.

Sthānaka-vāsin views are expressed in the commentaries or creative writings authored by some of their teachers and written in local languages such as Gujarati and Hindi.

Doctrinally, only Dharmasiṃha’s Āṭha Koṭi tradition in Gujarat differs significantly from the other four schools, which disagree only on minor points of philosophy and ritual.

A common religious activity for the Sthānaka-vāsin laity is dayā dharma. This is compassionate help – dāna – for animals and human beings. Establishing, funding and working in shelters for animals and people accumulates merit and advances the active Jain along the path of salvation.

There are three doctrinal characteristics shared by all the Sthānaka-vāsin traditions. 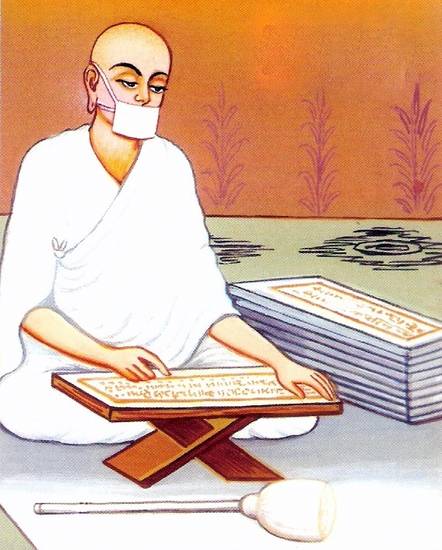 The laity generally rejects material forms of worship such as performing rituals and praying to idols. Instead they worship mentally, through meditation – dhyāna – and study – svādhyāya. Practising the austerities – tapas – of fasting and asceticism is also a focus of religious practice.

Nowadays, an elaborate infrastructure of halls – sthānakas – which double as monasteries for visiting mendicants, exists for communal performance of these practices.

Some Sthānaka-vāsin sects are known for following strict rules of behaviour in accordance with the prescriptions in the 32 accepted Jain scriptures. The monks and nuns are not allowed to wash their clothes, to use flushing toilets or electricity, to publish books and so on.

Compulsory use of a mouth-cloth

Sthānaka-vāsin mendicants must always wear a mouth-cloth – muṃhpatti – to prevent their accidentally swallowing living beings such as insects and dust. They may remove the mouth-cloth while eating or drinking.

The square white mouth-cloth is the main visible sign of identity for Sthānaka-vāsin monks and nuns.

Pravin K. Shah writes about the Five Great Vows taken by Jain monks and nuns. The information is provided by the Jainism Literature Center, associated with the Faculty of Arts and Sciences at Harvard University.