Contributed by Julia A. B. Hegewald

Pavilions form sacred architectural spaces of veneration, which house simplified representations of revered beings, particularly Jinas and other enlightened teachers. They are generally quite simple structures yet, over time, they may develop into larger Jain temples.

Religious architecture in South Asia frequently undergoes many stages in its development from minimal towards properly constructed sacred buildings. Often, it is simply a venerated footprint – pādukā – or image raised on a low platform by the wayside, which marks the start of an architectural development and place of worship. The next step in the development is often to increase the height of the platform and to raise a sheltering roof above the revered object to create a simple pavilion.

Such pavilions are very common at sites of Jain veneration and often mark the enlightenment sites of significant teachers, housing figural statues and symbolic representations.

Pavilions are an important element of the Jain architectural repertoire. A pavilion may be used as a centre of worship in its own right as well as forming one or more elements of the different types of Jain temple architecture.

The pilgrimage paths leading up most sanctified Jain hills are lined by such sacred pavilions, which are often arranged in small groups. Examples of such paths can be found at Bamanvad, Rajasthan.

There are also examples where small pavilions have been raised from the ground on pillars to elevate the objects of veneration. 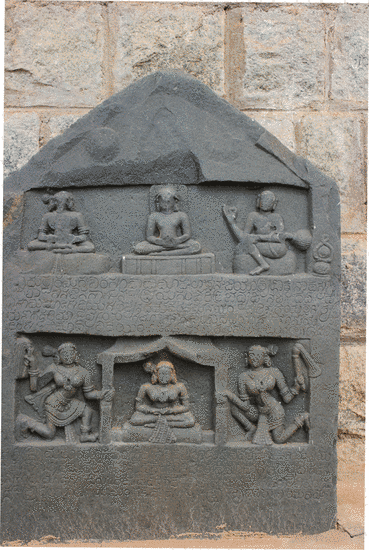 In the Indian subcontinent, holy images are frequently displayed in the open, at places considered to be of particular sacred importance. These open-air objects are venerated as part of ritual worship.

Sacred objects are erected on the summit of hills, next to rivers or lakes and below trees. Furthermore, scattered statues and damaged sculptures have often been grouped together inside Jain temple compounds and displayed in a formalised way. In fact most Jain temples in the south of India display such open-air assemblies of statues. These include:

These venerated objects have usually been raised on low terraces made of stone, and today also of concrete. These shrines are not usually topped by roof elements, however. Instead, the boundary of the small consecrated areas is often marked by rows of low pillars or stone blocks.

In southern India, groups of openly displayed images are usually found on the left side of the main temple structure, towards the back of the compound. Well-known examples are the temples at Mudabidri, Karnataka. Additionally, the enclosure wall – prākāra – at the back of temple complexes can at times be lined by similar representations, usually of snake stones – nāga-kals – or memorial stones. Such snake stones can be seen in the Jain temple at Bhatkal, Karnataka. A good example of a memorial or hero stone is found in the Kedareshvara temple in Balligavi, Karnataka.

Images at the side and back of temples are revered when worshippers walk around the central shrine as part of the religious rite of circumambulation – pradakṣiṇā. 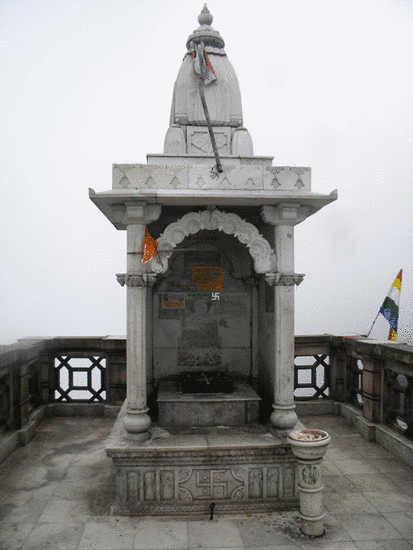 Slightly more elaborate than open-air shrines are simple pavilions, referred to as chatrīs or caraṇas, which have been raised above holy objects, such as temple guardians or hero stones. They are mostly small and square, with roofs that may be domed or topped by temple towers also typical of larger religious structures. These pavilions may be extended to form small walled temples, as the religious site develops.

Most chatrīs are made of stone, usually white marble or red sandstone, such as those in Mount Bahubali at Kumbhoj, Maharashtra. The vast majority have open sides, consisting of four corner pillars, and a small roof. In other instances the sides and back have pierced stone screens – jālīs – creating a semi-enclosed space inside. This type is typical of the pilgrimage site of Mount Paraśnātha in Bihar, for instance. Chatrī pavilions of plastered brick can also have solid walls and represent miniature versions of shrines.

Most pavilions are square in plan although there are octagonal examples. They do not usually measure more than half a metre in diameter, with a basement section, typically of similar dimensions. Most chatrīs are domed, pointing towards a construction date from about the 15th century onwards. Others display a north Indian – nāgara – roof element – śikhara – also found in larger temple structures. A smaller number displays very individualised roof decorations in fairly unusual shapes.

Over time, the sides of such pavilions can be completely enclosed and a porch added at the front, transforming them into proper small temple structures. In other instances, small shrines have replaced places of open-air worship. This illustrates general change and development, which religious sites commonly undergo in history. 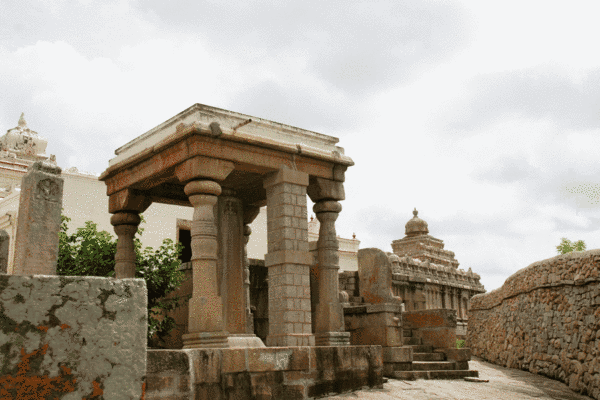 The vast majority of Jain pavilions have been built around the sacred foot imprints – pādukās – of holy individuals. These are usually the Jinas or more recently deceased Jain teachers. They may also contain commemorations of lay Jains who died a religious death, representations of mythological events and Jain cosmology. Many pavilions celebrate the liberation of the soul, which is a central Jain belief.

In most cases, chatrī pavilions house the pādukās of one or several of the Tīrthaṅkaras. Due to different iconographic and ritual conventions, Śvetāmbara and Digambara Jains can only worship their own figural statues. However, the veneration of more abstract footprints in simple pavilions allows followers of both sects to pay homage to the same sacred object. As such, pavilions built around pādukās of the Jinas act as an integrative element in Jain religious practice.

The pavilions can also house the footprints of medieval or more recently deceased Jain saints and teachers. This stresses the importance which teachers – gurus – hold in Jainism, a religion which is strongly built on mendicant lineages or ‘pupillary descent’.

Examples of such pavilions can be found at the base of Bamanvadji Hill, Rajasthan.

Small representations of the mythical teaching assembly – samavasaraṇa – and Jain cosmological representations can also be displayed inside open pavilions, as may be seen on Mount Śatruñjaya in Gujarat and at Jaisalmer in Rajasthan.

Some pavilions also contain inscription panels. These are revered as they were erected by pious kings and queens who supported Jainism. Many list and glorify the holy deeds of devotees and their revered teachers, such as those on Candra-giri Hill at Shravana Belgola in Karnataka.

Relatively unusual is the combination of sculptures of human figures with more abstract pādukās. An example of this is the Rajasthani site of Bamanvad.

Pādukā pavilions are frequently used to mark the site of enlightenment of a saint or teacher. This is also true of open-air foot imprints, which have not yet been housed inside a structure. Many examples of both can be seen on Mount Droṇa-giri in Maharashtra, where boards naming the deceased are next to many caraṇas. Another example from the same Indian state can be seen at the base of Bāhubali Hill, where the chatrī of Siddha Sena Muni Mahārājjī bears a commemorative inscription.

The aniconic form of representation of the pādukās illustrates particularly well the religious belief that, on reaching full enlightenment, the soul leaves the physical body and entered a bodiless state as a siddha. 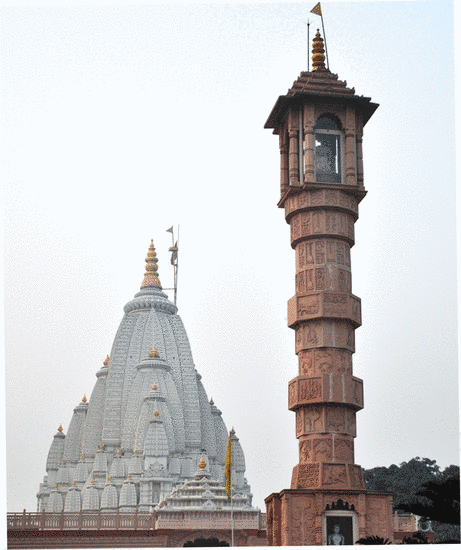 Sacred pavilions usually raise the objects of veneration a metre or so from the ground. In south India, pavilions can also be positioned on short pillars, which raise them to eye level. Much smaller pavilions on very tall pillars are found throughout India and are called māna-stambhas. There are also brahmadeva-stambhas, which contain statues of the protective deity Brahma or Brahmadeva. Visible from some way off, these tall columns serve as identifiers of Jain temples as well as elements in ritual practice.

Sometimes the pillars are relatively short, only about one to one and a half metres high. This raises the shrines to a comfortable height for a standing devotee to venerate the images inside the small structure. Such pillars are particularly widespread in the south of India. A famous example is the column in the Digambara Pārśvanātha Temple at Hassan, in Karnataka.

Other pavilions, however, have clearly been elevated far above human level on columns which are about five to ten metres tall. These are not immediately accessible to worshippers on the ground. This is related to the common south Indian Jain practice of erecting pillars topped by images, symbols and lamps.

There are two major forms of these tall pillars topped by small pavilions. Particularly common are māna-stambhas – ‘pride pillars’. These are votive columns, usually at the front of Jain temples. Māna-stambhas are topped by a small pavilion, which usually houses four adorsed Jina statues – figures with their backs turned towards one another and looking outwards – or simply a single image of a Jina. Māna-stambhas are found throughout the Indian subcontinent, especially in Digambara temples.

Closely related in design are pillars dedicated to the yakṣa Brahma or Brahma-deva, who functions as the kṣetra-pāla, the guardian of the sacred area, in Jain temple complexes. He is particularly popular in the south of India. Brahma-stambhas or brahmadeva-stambhas are surmounted by a figure of Brahma. In most instances, he is seated in a small raised pavilion, as may be seen at Halebid and Shravana Belgola, both in Karnataka.

Elevating the holy items means they are visible from afar. Consequently, they do not act only as objects of veneration at the site, but also gain a more symbolic value, so that a place is recognised as Jain from a distance.

One of Mahāvīra’s chief disciples