The primary set of Śvetāmbara canonical scriptures, the Aṅgas – ‘limbs’ in Sanskrit – can be grouped into two classes.

The six Aṅgas numbered 1, 2, 3, 4, 5 and 10 can be bracketed together. Although some of them use narrative techniques, they can be considered to be more or less reference works. They set out rules for mendicants and present a detailed compilation of topics fundamental to Jainism, such as cosmology and ethics. The principles of Jain doctrine are stressed, often contrasted with rival beliefs, while there is also information on the 24th Jina, Mahāvīra, and his opponent Makkhali Gosāla that is not found elsewhere.

The other five Aṅgas can be described as the ‘story Aṅgas’ because their predominant literary form is the narrative. By tracing the eventful lives of characters through the cycle of births, the stories offer numerous examples of the workings of crucial Jain concepts, such as karma and the soul.

Chiefly in prose, the Aṅgas also contain ‘ascetic poetry’, which is verse on subjects connected with Jain mendicants. One of the best-known examples is the sixth chapter of the second Aṅga, the Sūtrakṛtānga, which honours Mahāvīra. The Sūtrakṛtānga also contains one of the most celebrated of Mahāvīra’s parables. 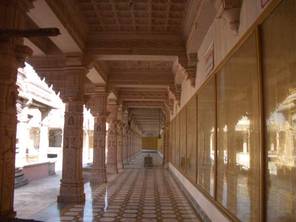 Śvetāmbara Jains believe the Aṅgas are the teachings of the 24th Jina. In the Jain tradition there were originally 12 Aṅgas, but one book has always been considered lost very soon after the time of Mahāvīra. This text, the Dṛṣṭi-vāda, was therefore never written down along with the other Aṅgas by the Jains who became the Śvetāmbara sect. The other main Jain sect, the Digambaras, does not hold these 11 Aṅgas to be canonical.

The titles of the Aṅgas can be understood in various ways. This table gives rough equivalents.

The first Aṅga is called the Ācārānga-sūtra. It deals with many aspects of monastic conduct and emphasises non-violence as the ultimate ideal and asceticism as the highest value. It presents the Jain mendicant as a sage living in seclusion and absolute self-control rather than as a member of an organised community.

Aṅga Number 1 contains two sections. The first is probably one of the oldest parts of the Jain holy writings. The second section is very likely to be younger and may have been added later. Each of the section is divided into several parts.

First section of the Ācārānga-sūtra

The first section of the Ācārānga-sūtra has the title of Bambhacerāiṃ – Pure Life. Because of its antiquity, the German scholar Walther Schubring dubbed it the ‘senior’ work. The seventh of its nine chapters was lost centuries ago.

The text mixes poetry and prose, with the final chapter describing Mahāvīra’s wandering as an ascetic a particularly well-known example of ascetic poetry.

Second section of the Ācārānga-sūtra

The second section of the Ācārānga-sūtra has linguistic and content features pointing to a later date than the first. There are also hints that it was originally a supplementary work. It is divided into sixteen chapters. 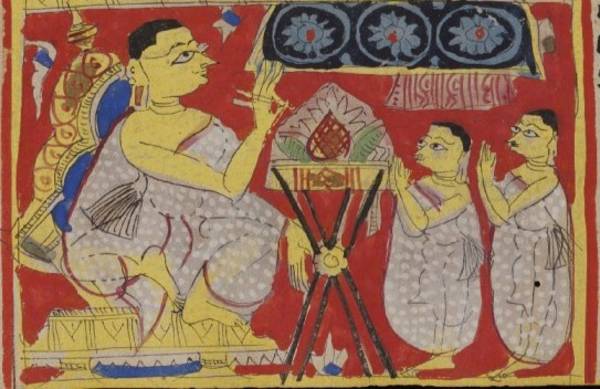 One of the main characteristics of Aṅga Number 2 is the emphasis on the principles of Jain doctrine – the true doctrine. It contrasts them with the beliefs of other schools, whose followers are ‘fools’. Thus the Sūtrakṛtānga gives insights into the sects and schools that were rivals to the Jains. A number of comparisons and examples are used to impart the teaching.

There are 23 chapters in the Sūtrakṛtānga. The first section is made up of a mix of prose and verse chapters. The sixth chapter is a famous passage of poetry on mendicants and their lives. All in prose, the second section boasts a very well-known parable.

First section of the Sūtrakṛtānga

The first section of the second Aṅga has 16 chapters, in a mixture of prose and verse. One of the most famous examples of ascetic poetry is the sixth chapter, which pays homage to the 24th Jina, Mahāvīra.

Second section of the Sūtraktānga

The second section of the Sūtraktānga is entirely in prose. The first chapter of seven holds one of the best-known examples of Mahāvīra’s parables.

The two scriptures can be viewed as reference books of Jain terms and concepts in the form of headings and enumerations. They are not encyclopaedias since they do not expand upon the meaning of each term. The Sthānānga and the Samavāyānga merely list concepts that are organised into categories based on numbers. Taken at face value, some statements are therefore quite challenging.

The terms and concepts of the works cover all possible areas of Jainism:

The same concept is often dealt with more than once. This is because, depending on the angle of analysis, it can be considered differently with different kinds of subdivisions. For instance, the total number of the colours of the soul – leśyā – is six. But they are not found at the same time in the same living being. Thus it also occurs in the section discussing concepts grouped in threes, in connection with the number of colours applicable to various types of living beings.

In some ways, therefore, the Sthānānga and the Samavāyānga cover all areas of knowledge.

These two Aṅgas are thus highly technical. They address readers who are familiar with the doctrine because they suppose a lot of background knowledge. For the specialists, they function as highly developed mnemonic tools. Even so, the way the concepts are ordered within each numerical section is not crystal clear.

They are mostly written in prose, but verses are occasionally used in some topics. These could be quotations from external sources.

The fifth Aṅga is often referred to by the laudatory epithet Bhagavaī – ‘Venerable’. This name is probably more widely known than its formal title of Viyāhapannatti or Vyākhyāprajñapti.

This bulky book is divided into 41 sections known as śatakas. These are themselves subdivided into subsections called uddeśas, except for section 15, which has no subdivision. In many cases these subdivisions have further divisions. Since the beginning of Jain studies, the structure of this work has been discussed. With variations, it is now more or less agreed that there is a nucleus. This corresponds to sections 1 to 20, except for section 15. Later stages of accretions have been identified (Weber, Deleu, Ohira, Dixit), mainly on the basis of formal criteria.

The Bodleian Library is part of the University of Oxford, the official university library with various specialist libraries. It boasts extremely extensive collections of books, newspapers, magazines, journals, manuscripts, maps, musical scores, and official and personal papers, both ancient and modern. With large Jain holdings, the Bodleian is a JAINpedia partner.

One of the JAINpedia partners, the British Library is the national library of the UK. Based in London, it holds millions of historical and contemporary documents of all kinds, including books, newspapers, magazines, journals, manuscripts, musical scores and political and personal papers and letters. It also has a large collection of sound recordings and illustrations. Its collection of Jain manuscripts is one of the biggest outside India.

The V&A in London specialises in art and design. Its enormous collections include historical and contemporary sculptures, textiles, furniture, jewellery, photographs, drawings, books, prints, ceramics, glass- and metalwork, theatre and performance artefacts. It has extensive Asian holdings, including many illustrated Jain manuscripts, and is one of the JAINpedia partners.

Part of the Wellcome Institute, the Wellcome Collection is one of the JAINpedia partners. Its extensive collections include historical and contemporary books, manuscripts, prints, paintings, photographs and films, with a bias towards science and medicine. The Wellcome holdings of Jain materials are small but valuable and interesting.

The Jain eLibrary provides PDFs or other files of Jain texts to download for non-commercial purposes. Scriptures, commentaries, dictionaries, articles, magazines and books on all aspects of Jainism are available in many languages, including English and modern Indian languages. Most sects are represented and both ancient and contemporary works are included.

Only registered users who have signed into the site can download material. To register, you must provide a valid email address, a password and some personal details.

The Centre of Jaina Studies at the School of Oriental and African Studies (SOAS) in the University of London, is the only academic centre specialising in Jain research outside India. Established in 2004, the centre hosts an annual conference for scholars of Jainism and publishes an annual newsletter and the International Journal of Jaina Studies (Online). It also runs undergraduate and postgraduate degrees in Jain studies.

The Bhogilal Leherchand Institute of Indology in New Delhi focuses on scholarly research into Śvetāmbara Jainism. With a library of manuscripts for research, it organises academic seminars and publishes scholarly books.

The French Institute of Pondicherry is a research centre of the French Ministry of Foreigh Affairs. Founded in 1955, it undertakes scholarly research and training in South and South-East Asia. The website is in English.

Jainworld provides a list of Indian universities that have departments with researchers in or courses investigating aspects of Jainism.

Jainworld provides a list of research institutions in India that focus on various aspects of Jainism.

Enrolling students from 2011, Claremont Lincoln University in California, USA, focuses on the academic study of religions. It offers a programme of Jain studies in partnership with Jain organisations based primarily in North America.

The Centre of Jaina Studies in the School of Oriental and African Studies (SOAS), at the University of London, publishes an annual newsletter, which is available to download as a PDF. The newsletter features:

Based in St Petersburg, the Institute of Oriental Manuscripts holds 150 Jain manuscripts. The website gives full information in English about the history and work of this research institute, part of the Russian Academy of Sciences.