Devarddhi-gaṇi is a monk associated with the creation of the Śvetāmbara canon, which is said to have taken place in 453 CE at Valabhī, in Gujarat.

He is generally known by the Sanskrit form of his name, which is Devaḍḍhi or Deviḍḍhi in Prakrit. He is also known as Devavācaka, although it is not certain that both names refer to the same person.

Very little is known about Devarddhi-gaṇi, but later sources link him very strongly to the Śvetāmbara scriptures and to the monastic lineage associated with the Jinas, who are the traditional source of Jain teachings. Devarddhi-gaṇi had a leading role in the process of writing down the Śvetāmbara Āgamas and is venerated in the list of early Jain teachers.

Devarddhi-gaṇi is a significant Jain figure because of his crucial role in the final redaction of the Śvetāmbara canon in the fifth century CE. He is sometimes said to be the author of the Kalpa-sūtra as well. But there is no historical information about his life or personality as an individual apart from this. In the texts where his name appears, he is revered only for his knowledge of the tradition.

The term gaṇi originally means ‘leader of a gaṇa’ or group of monks. Devarddhi-gaṇi is often dubbed Kṣamā-śramaṇa – ‘patient ascetic’ – a respectful title given to Jain religious teachers in old texts. The name Devavācaka is also sometimes given to him, which underlines his role in the Valabhī council. Meaning ‘god‘, deva is the first part of this name while vācaka means ‘the one who recited’ the scriptures.

Some Jain authors hold that Devarddhi-gaṇi is the same person as the Devavācaka who composed the important scripture called the Nandī-sūtra. One well-known example is Devendra-sūri in the 13th century. However, later scholars have contested this assertion.

Devarddhi-gaṇi is named in several later works as a highly revered Jain teacher. He is explicitly linked to the ‘Kāśyapa gotra’, the most renowned monastic lineage, which is associated with most of the 24 Jinas.

One of the texts that mention him is the Sthavirāvalī, the second section of the Kalpa-sūtra, which is both an account and a praise of all the early Śvetāmbara Jain teachers. The final part is a verse homage to them in the first person, and the last verse celebrates Devarddhi-gaṇi.

I revere the Kṣamāśramaṇa Devarddhi of the Kāśyapa gotra, who wears, as it were, the jewel of the right understanding of the Sūtras, and possesses the virtue of patience, self-restraint, and clemency

This is the best-known verse about Devarddhi-gaṇi and is found later in the R̥ṣimaṇḍalaprakaraṇa, a verse work in Prakrit praising the most famous Jain teachers of the tradition.

The ‘Kāśyapa gotra’ is one of the most famous monastic lineages associated with Jinas and several early Jain teachers. Of the 23 Jinas who came before Mahāvīra, 21 belonged to this lineage (Kalpa-sūtra, Jina-caritra, verse 2; Jacobi’s translation 1895: 218). Several of the early Jain teachers celebrated in the Sthavirāvalī – ‘String of Elders‘ – were also in this mendicant lineage.

According to some Kalpa-sūtra commentators, the reason why Devarddhi is paid homage to here, at the end of the Sthavirāvalī, is his role in putting the Jina’s words into writing (granthāḥ pustakeṣu likhitā, see Jacobi 1879: 114). 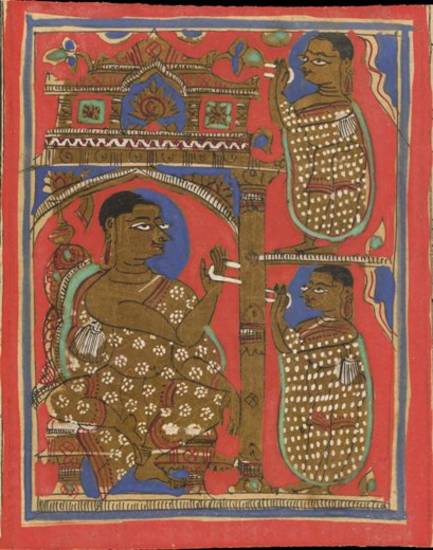 Very little is known about Devarddhi-gaṇi, as elements which would root him in history are unreliable, disputed or missing.

For example, his birth-place is sometimes given as Vairaval in Saurashtra (Illustrated Shri Nandi Sutra: 53) but no other sources support this.

Scholars debate the name of Devarddhi-gaṇi’s religious teacher. For example, in the section of the fifth-century Nandī-sūtra where homage is paid to a number of early teachers, the last name is that of Dūsa-gaṇi, or Dūṣya-gaṇi in Sanskrit. Since Devavācaka is said to be the author of this work, and mendicant writers ended lists of their monastic lineages with their own masters, this suggests that Dūsa-gaṇi was his teacher. But this holds only if it is assumed that Devavācaka and Devarddhi-gaṇi are the same person.

Some writers believe that Devarddhi was initiated by another teacher, known as Lohicca or Lauhitya in Sanskrit (Illustrated Shri Nandi Sutra: 53).

Another view is that Devarddhi was the pupil of Ārya Śāṇḍilya (Puṇyavijaya 1968: English introduction, page 42).

Despite such arguments, nearly all personal information about Devarddhi-gaṇi is lacking.

Some writers in the Jain tradition, such as the 13th-century mendicant Devendra-sūri, identify Devarddhi-gaṇi with an author called Devavācaka.

Devavācaka is attributed with authorship of an important canonical text, the Nandī-sūtra, in the Prakrit commentary – cūrṇi – on the scripture written in 676 CE. This would mean that Devarddhi-gaṇi composed the Nandī-sūtra.

This view, however, has been challenged by a leading Śvetāmbara monk-scholar, Muni Puṇya-vijaya. He argues that the monastic lineages of the Kalpa-sūtra and the Nandī-sūtra are different, and that two varying spiritual affiliations for one person would be impossible. Muni Puṇya-vijaya thus concludes: ‘To our mind Devavācaka and Devardhi are two different persons’ (1968: English introduction, page 42), and states that ‘Devavācaka composed the Nandi-sūtra before 523 V.S’ (= 566 CE).

Role in writing down the teachings 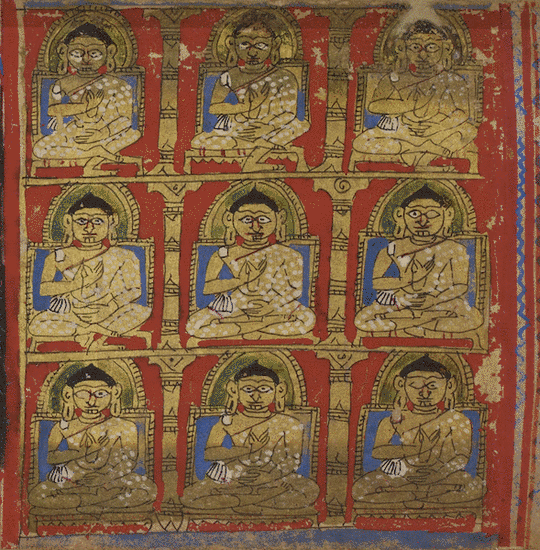 Devarddhi-gaṇi led the final Valabhī council, which produced the Āgamas of the Śvetāmbara sect. This fifth-century recitation was the last meeting to collate and clarify traditional oral teachings, which devotees believe came originally from the Jinas themselves. Later sources disagree about when these councils took place.

The final council was held in Valabhī, Gujarat. It took place ‘980 or 993 years’ after Mahāvīra’s death according to some traditional sources, which is 453 or 466 CE. All the texts comprising the Śvetāmbara canon were written down there. This council is said to have been supervised by the religious teacher Devarddhi-gaṇi Kṣamā-śramaṇa, who is unanimously associated with it in Śvetāmbara sources.

The final recitation is reported in works written several centuries after the events they describe. A representative account is the one given by Samayasundara, a 17th-century Śvetāmbara teacher belonging to the Kharatara-gaccha monastic order.

Please think over the matter looking at reality: 980 years after Mahāvīra, because of a famine which lasted for 12 years, numerous religious teachers died and knowledgeable people had disappeared. People thought that the Jinas’ teachings should be preserved at all cost and that this preservation depended on the canon for the benefit of generations to come who would be enlightened. Out of devotion for the tradition and at the insistence of the community, Devarddhi-gaṇi summoned to Valabhī all the religious teachers who had survived. From their mouths, he progressively collected as he thought fit all the paragraphs in the Āgamas that had been spared, whether they had something less or more, whether they were lacunary [=had gaps] or not, and put them to writing. Thus after this collecting work, it is Devarddhi-gaṇi who became the author of the totality of the 45 Āgamas, even if, originally, they had been uttered by Mahāvīra’s disciples
(anukrameṇa sva-matyā saṃkalayya pustakārūḍhāḥ kr̥tāḥ, tato mūlato gaṇadhara-bhāṣitānāṃ api tat-saṃkalanāntaraṃ sarveṣāṃ 45 api āgamānāṃ kartā śrī-Devarddhi-gaṇi-kṣamāśramaṇa eva jātaḥ)

Sāmācārīśataka of Samayasundara, page 77b
See also the Sanskrit extract in Jacobi 1879: 117

A passage like this one ascribes a very important responsibility to Devarddhi-gaṇi, as Samayasundara calls him kartā – ‘author’. He goes on to explain that, even though Devarddhi did his best to collect and harmonise the material he got, this did not mean that all inconsistencies or difficulties had been removed. Samayasundara thus admits that there are oddities in the scriptures, which can be explained by the existence of conflicting variants.

Further, there are hints in late commentaries on the Kalpa-sūtra that this work was also put into writing by Devarddhi-gaṇi or even that he was its author (see Sanskrit extracts in Jacobi 1879: 116). However, there is no firm evidence that Devarddhi-gaṇi was involved with writing down or composing this scripture. Such hints may have been a way of associating him with one of the key texts for Śvetāmbara Jains. 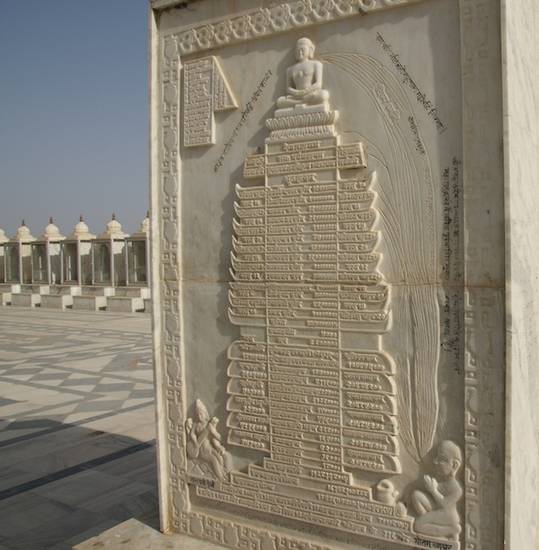 All Jains believe that the Jinas provide the original teachings for the Jain faith, especially Mahāvīra, the 24th Jina. The Jinas reveal the same essential truths, according to the needs of the society into which they are born. They pass on these principles in speech, beginning the chain of oral transmission. After being passed on for generations by religious leaders known as elders and teachers, these oral teachings are eventually written down, creating the scriptures.

The roots of the different Śvetāmbara and Digambara canons can be traced to the physical split in the Jain community around 300 BCE. Large parts of the teachings had been forgotten already, such as the Pūrvas and the 12th Aṅga, the Dṛṣṭi-vāda, which both sects agree was lost by the fourth century BCE. The group of Jains who can be thought of as ancestors of the Śvetāmbara sect recognised that the famine that drove some Jains south endangered preservation of the tradition. They began to organise official recitations – vācanās – or ‘councils’ to consolidate knowledge of the teachings.

It is clear that each of the main councils was held in a different place and associated with a specific religious teacher. But the time they took place is extremely uncertain. It should be borne in mind that all the accounts which refer to these councils are much later than the events themselves and that there are disagreements between sources as well.

The table shows that there is no unanimous tradition about giving a date or agreement about any dates even when they are provided.

The illustrated story of Devarddhi-gaṇi Kṣamā-śramaṇa from Kumarpal Desai's 1998 Glory Of Jainism is provided on the HereNow4U website. This version of Devarddhi-gaṇi 's life names his teacher as Ācārya Lohitya-sūri.

Jinalaya.com provides practical and historical information about the Shri Vallabhipur temple in Gujarat. Dedicated to the 24th Jina, Mahāvīra, the temple houses statues of Devarddhi-gaṇi Kṣamā-śramaṇa and 500 other ācāryas or religious leaders. The temple at Valabhī – now Vallabhi – commemorates the final compilation of the Āgamas that make up the scriptures of the Śvetāmbara sect.