Candanbālā, also known as Candanā, was the head nun under Mahāvīra and is one of the 16 satīs – soḷ satī. Her story is especially well known because she appears at a key moment in Mahavira’s progress to becoming a Jina. For both Digambara and Śvetāmbara Jains, Candanbālā is one of the many Jain satīs whose lives are examples of the ideal path for women. She also demonstrates virtues that should be imitated by both men and women. Her story features the quintessential gift to the worthy recipient – supatra dāna – offering food, clothes and medicine to a Jain mendicant as alms.

Among Śvetāmbaras, Candanbālā’s story is re-enacted as part of the fast-breaking ritual associated with the Candanbālā Fast. The three-day fast is completed when the faster feeds a Jain mendicant before breaking her own fast. In addition to reducing karma, the Candanbālā Fast is believed to improve the faster’s beauty and marriage prospects.

Princess Vasumatī is born in the city of Campa. When Campa is sacked in a war, a camel trader grabs the princess and her mother, who dies immediately. He offers Vasumatī as a slave in the market, where a Jain merchant named Dhana sees Vasumatī and realises that she must be a kidnapped princess. He buys her and decides to raise her as his own daughter until her family finds her. He and his family call her ‘Candanbālā’, which means ‘Hair like Sandalwood‘, because of her beauty.

Candanbālā is punished for her beauty

As Candanbālā grows more beautiful, the merchant’s wife, Mulā, becomes jealous of her. She orders the servants to shave off Candanbālā’s hair, bind her with chains and lock her in a distant corner of the house. For three days, whenever the merchant asks after Candanbālā, his wife lies to him that she is outside or asleep.

When Dhana finally convinces the servants to tell him where Candanbālā is, he finds her shaven-headed and chained, with tears in her eyes. She has not eaten or drunk for three days. He searches for something for her to eat but there is only a winnowing basket full of lentils. Candanbālā vows that she will eat only after first giving food to a guest. 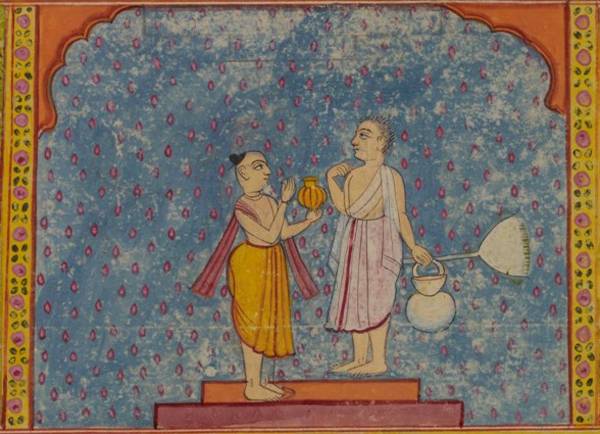 At this very moment the 24th Jina Mahāvīra comes seeking alms. He has been fasting for five months and 25 days, awaiting a suitable donor. He has vowed to accept food only from a princess who is now a slave, standing on the threshold with her head shaved, dressed in white, crying while sorting lentils in a winnowing basket.

Candanbālā stands in the doorway of her room with the winnowing basket full of lentils and calls to Mahāvīra that he should take alms. He refuses because she is not crying. She begins to weep. Because Candanbālā then meets all the conditions of his vow, he returns to take alms.

At the fulfilment of Mahāvīra’s vow, the gods shower them both with gold, Candanbālā’s chains break off, her long beautiful hair miraculously returns and she is known instantly to be Princess Vasumatī.

After Candanbālā’s true identity is revealed, Mahāvīra tells the merchant, who had become like a father to her, to protect her until Mahāvīra becomes enlightened and she can renounce.

Later, Candanbālā renounces the life of a lay Jain under Mahāvīra. She then becomes his first female disciple and the head of the order of nuns under him.

At the end of her life Candanbālā achieves enlightenment, according to Śvetāmbara versions. In Digambara accounts of the story, she is reborn as a male god in one of the heavens.

Although Candanbālā, called Candanā in earlier texts, is first introduced in the fifth-century Kalpa-sūtra, her story became a moral one some while later. Since Candanbālā’s life story emphasises the merits of giving alms in the right way, it has appeared in collections of sermons and moral tales for hundreds of years. It is one of the most popular tales of satī or virtuous women in the present day, often found in independent versions as well as in collections of stories. A popular Śvetāmbara episode recounts Candanbālā’s reaching omniscience.

Candanbālā is named as the nuns‘ leader under Mahāvīra in the Kalpa-sūtra, but her story does not develop until the āvaśyaka commentaries of the seventh and eighth centuries. The earliest telling of her story is found in Jinadāsa’s Āvaśyaka-cūrnī as a story demonstrating the merits of proper alms-giving. The version in modern texts and contemporary retellings follows the model given above. However, earlier versions of the story have Candanbālā weeping when Mahāvīra arrives.

Like many Jain satīs, Candanbālā’s story appears in Śubhaśila-gaṇi’s 15th-century Bharateśvar Bāhubalī Vṛttiḥ and the later popular texts based on these collections. In the 18th century the Upadeśaprasāda, a popular collection of sermons, includes Candanbālā’s story because it shows the rewards of being a donor.

There are many hymns, including sajjhāys and stavans, that tell the story of Candanbālā. Hers is the most widely retold satī narrative in contemporary publications. The tale is found in every satī collection and there are books dedicated to her story alone. The Candanbālā story is the subject of several Jain DVDs and comic books as well, suggesting her ongoing popularity with younger as well as older Jains. 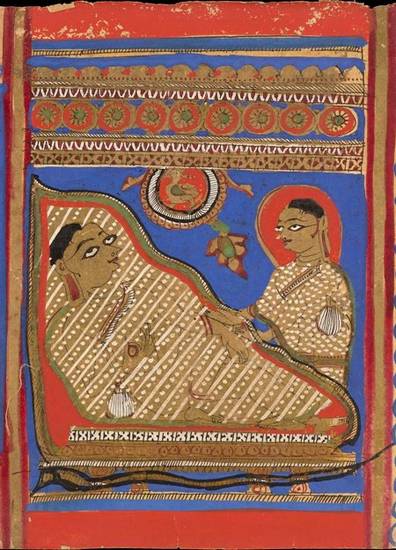 In Śvetāmbara tellings from the medieval period forwards, there is an episode recounting the omniscience of Candanbālā. This popular episode is first found in the 12th-century universal history text by Hemacandra, the Triṣaṣṭi-śalāka-purūṣa-caritra.

One night after Candanbālā has become the leader of the order of nuns, the nun Mr̥gāvatī innocently returns late to the mendicants‘ lodgings. As a result of the profound nature of her apology to Candanbālā and her resulting loss of ego, Mr̥gāvatī reaches omniscience. This allows her to see a snake moving in the darkness towards the arm of Candanbālā, who is asleep. Mr̥gāvatī lifts the sleeping woman’s arm so the snake cannot bite her.

Candanbālā wakes up and asks how Mr̥gāvatī could see the snake in the perfect darkness. She recognises that Mr̥gāvatī has attained omniscience. The power of this realisation leads to Candanbālā’s also reaching omniscience. 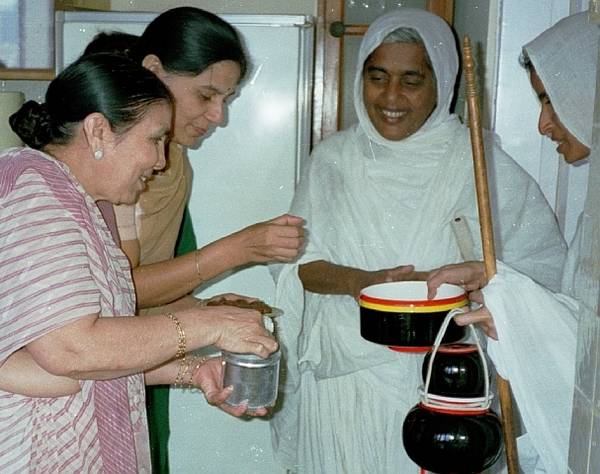 The involuntary fast Candanbālā undergoes in her life story has inspired a three-day fast among Śvetāmbara Jains. Just as Candanbālā does, the faster offers alms to an ascetic before breaking her fast. At this point the faster usually re-enacts the binding of Candanbālā and her offering of the lentils to the mendicant. The Candanbālā Fast is performed only by women, who choose to do it because many Śvetāmbaras believe that, as well as reducing karma, it enhances beauty and is an auspicious fast for attaining a good marriage.

The Candanbālā Fast involves three days and nights without eating. Fasters can only drink boiled water and that only during daylight hours. The defining feature of this Jain fast is the offering of alms before the fast is broken. After the mendicant has been offered boiled black lentils as alms, the faster then ends the fast by eating the same kind of lentils.

In practice, the fast-breaking of the Candanbālā Fast involves some degree of acting out the Candanbālā story. Usually the lentils are offered to a mendicant by the faster from the corner of a winnowing fan. Customarily, the faster’s hands or feet are tied together to symbolise Candanbālā’s chains. The faster is often dressed in white as well. The dramatisation of the story might include full-length dance-dramas, the building of a hut from which Candanbālā comes out to feed the mendicant or real chains to bind the faster’s hands and feet.

Effects of the Candanbālā Fast

Jains consider the Candanbālā Fast to be effective in lessening karma, as with all fasts. Only women undertake this fast, partly because it is widely believed to make the faster more beautiful, enhancing her hair especially. This increased beauty is seen as an asset in making a good marriage and the Candanbālā Fast is often named as a suitable fast for ensuring successful marriage agreements. 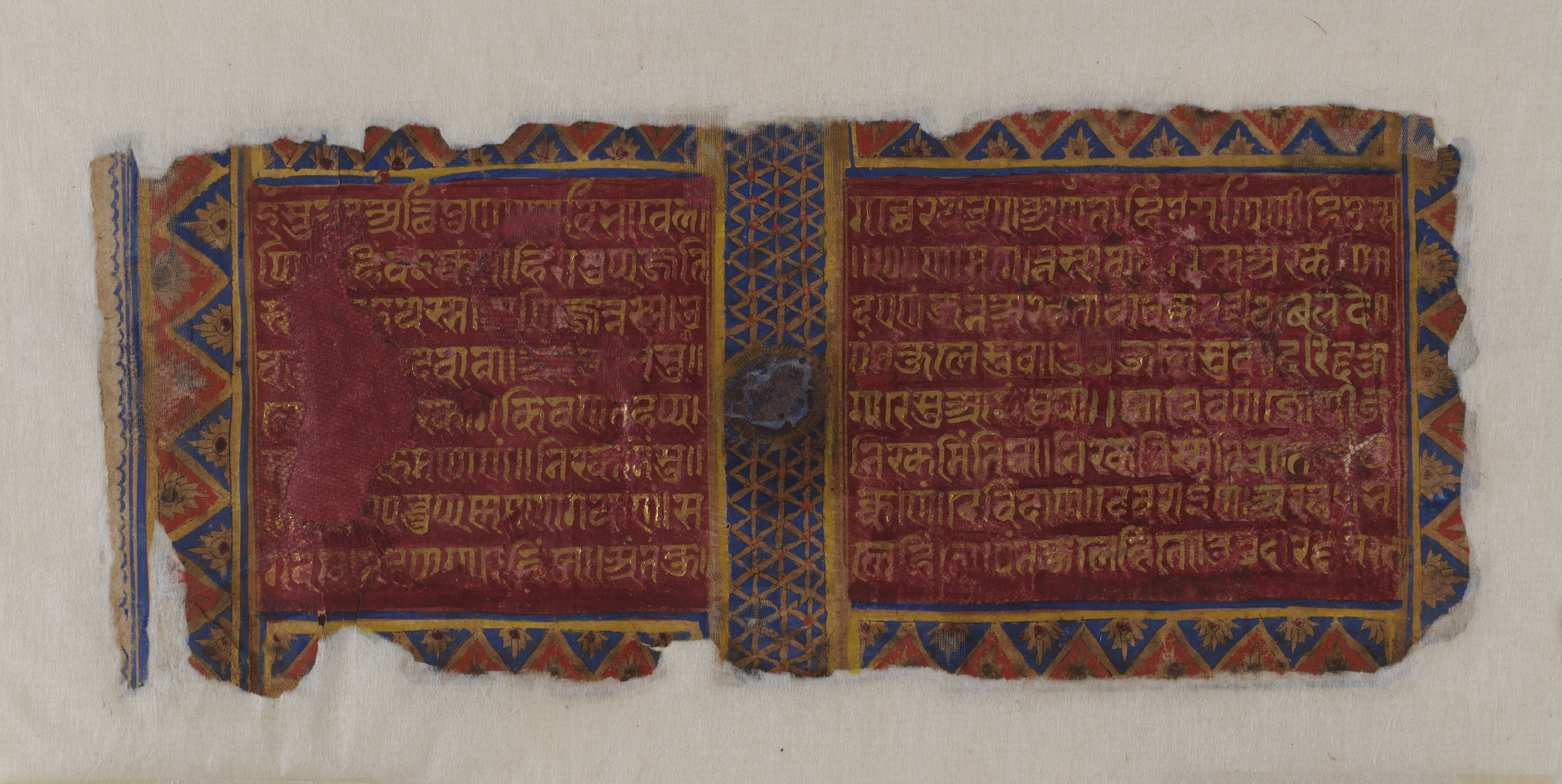