The concept of knowledge – jñāna – is crucial in the Jain faith. To escape the neverending cycle of birth, Jains must follow the ‘three jewels’ of ‘right faith’, ‘right knowledge’ and ‘right conduct’ so they can gain absolute knowledge or omniscience, the vital stage before liberation. The religious importance of knowledge is acknowledged in the dedicated festivals celebrated by the two main Jain sects. The Śvetāmbara celebration is Jñāna-pañcamī while the Digambara equivalent is called Śruta-pañcamī. The general concept at the centre of the festival is similar in both traditions, but there are differences in the date and the course of events. 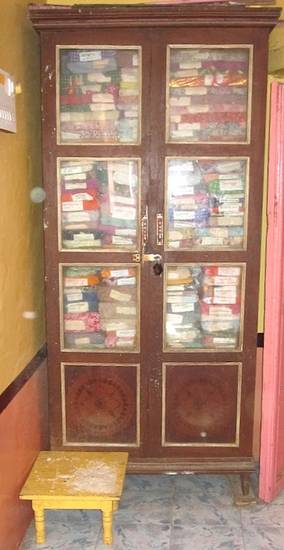 Jainism distinguishes five types of knowledge, of which the second is relevant here. It is known as śruta-jñāna, literally ‘knowledge of what has been heard’. It is therefore knowledge that is closely connected with language and words. In practice, the term refers to knowledge of the teaching that the 24 Jinas preached to their disciples, who transmitted it to others, who passed it on to still other people.

All Jains agree that the Jinas’ message was first spread orally and they also agree that, at a much later time, this teaching was written down and resulted in various texts. But the two main sects of Digambaras and Śvetāmbaras differ on the way the written transmission was achieved and on what these individual texts are. Thus even though the names of their separate festivals of knowledge mean the same thing and refer to the same variety of knowledge, it is natural that the two sects have distinct celebrations.

Both Jñāna-pañcamī and Śruta-pañcamī feature the physical artefacts of holy writings being treated as objects of worship. The Jain festivals of Paryuṣaṇ and Daśa-lakṣaṇa-parvan venerate copies of particular holy texts – in the case of the former it is the Śvetāmbara Kalpa-sūtra while at Dasa-laksana-parvan Digambaras focus on the Tattvārtha-sūtra. However, during Jñāna-pañcamī and Śruta-pañcamī, it is the concept of holy knowledge that is at the heart of the celebration. Books and manuscripts of the scriptures are venerated not as objects of worship in themselves but as material representations of the teachings of the Jinas.

The Śvetāmbara festival of knowledge is called Jñāna-pañcamī, which literally means ‘Knowledge fifth’. Jñāna-pañcamī takes place on the fifth day of the bright half of the month of Kārttika, roughly corresponding to October to November in the Western calendar. It falls between the major feast of Dīvālī and the beginning of the new religious year. This particular date is thought of auspicious and has several names, indicating the multitude of meanings of this date for different groups in Indian society.

A tradition has emerged that the Dvādaśāngas – that is the ’12 Aṅgas’ that form the first group of Śvetāmbara canonical scriptures – was completed on this date. But there is no historical proof of that.

The Hindus consider the same date auspicious for a different reason. They call it Saubhāgya-pañcamī – ‘Good Fortune Fifth’. In a tenth-century Prakrit collection of stories about Jñāna-pañcamī, the concept of saubhāgya is prominent. The main characters of the stories are married women who observe this festival in the hope of protecting their husbands against illness and poverty (Chojnacki 1997).

Another common Śvetāmbara Jain name for this festival is Lābha-pañcamī – ‘Profit Fifth’. On this day merchants reopen the shops and offices that had been closed or were supposed to have been closed since before Dīvālī (Cort 2001: 173). It is thus the date when normal business begins again after the principal holiday of Dīvālī, which marks the turning of the year.

The festival is also known as Guru-pañcamī or ‘Teacher Fifth’, which recognises the significance of monks and nuns in the Jain faith. A key mendicant role is knowing the scriptures and passing on the teachings of the Jinas, and this title emphasises their importance in the transmission of Jainism.

These different names show how this festival is at the junction of different Jain values – the worldly aspirations of health and financial comfort, and the spiritual desire to advance along the path to enlightenment. 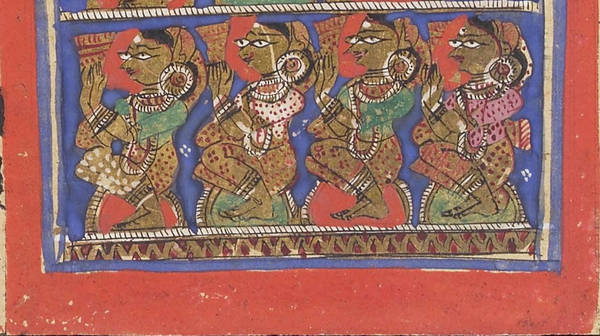 Numbers and mathematics have important roles in Indian culture, often demonstrated in festivals. In this festival the significant number is ‘5’, which can be seen from different versions of the stories connected with Jñāna-pañcamī and from the prescriptions in ritual handbooks (Chojnacki 2000). To get rid of disease, the main female character of one story is advised to ‘observe Jñān Pañcamī, a fast lasting for five years and five months to be performed on every jñān tithi, the fifth of the bright half of every month, or at the very least annually on Jñān Pañcamī‘ (Cort 2001: 174). The same advice is given to other characters in the story collections relating to this festival.

As with many Jain holy days, fasting is the devotees‘ main practice. But the ideal mentioned in the prescriptive textbooks or stories is hard to meet. Mostly, people observe a fast in which they eat only tasteless food – āyambil – or any kind of fast – upvāsa – common in Jainism.

As part of the routine activity of Jñāna-pañcamī, lay Jains also listen to mendicants’ preaching on the benefits of observing this vow and celebrating the festival. On this day in particular, monks and nuns do their best to convince the laity that they should read and learn the scriptures. Since mendicants are the link between the scriptures and the lay people, they are also worshipped on this day. For this reason Jñāna-pañcamī is also called Guru-pañcamī or ‘Teacher Fifth’.

The most concrete and specific aspect of the festival of Jñāna-pañcamī is the worship of books or manuscripts. This takes various forms. Frequently, old manuscripts are displayed on tables at temples and sprinkled with sandalwood powder – vāsakṣepa. This is similar to how images of the Jinas are worshipped. Lay people often commission fresh copies of the sacred texts while new books are commonly published on this day. Generally, manuscript colophons or introductions in published books often add to the usual dating formula the note that it was completed on a Jñāna-pañcamī day. This custom emphasises the connection between the new manuscript or book and this date. Just as idols are, especially esteemed books or manuscripts may be the centre of long musical processions involving the local monks, nuns and lay people.

More generally, any form of activity encouraging reading and writing is recommended on this day. For instance, children buy pencils and notebooks and copy simple religious hymns or mantras.

Some people extend the celebration to the ‘five types of knowledge’ of Jainism instead of celebrating only scriptural knowledge. For this purpose they often make a circuit of nearby temples, celebrating each type of knowledge in a different place.

On this day some Jains worship Sarasvatī, the goddess of learning, who is also known as Śruta-devatā. 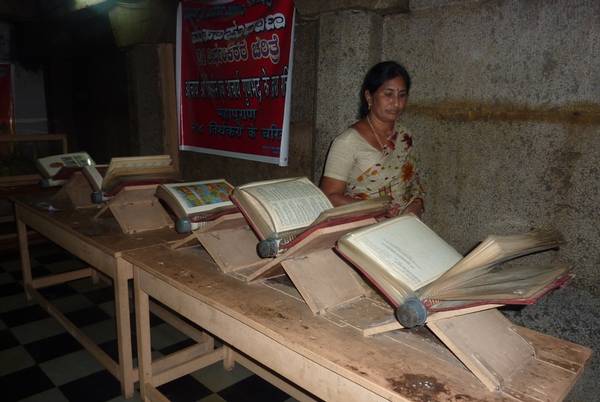 The Digambara celebration of Śruta-pañcamī – ‘Scripture Fifth’ – has a similar name to the Śvetāmbara festival of Jñāna-pañcamī and shares many features. The motive of the Śruta-pañcamī is also to celebrate the importance of the written word in preserving and passing on the teachings of the Jinas but it is slightly different.

Śruta-pañcamī takes place on the fifth day of the bright half of Jyeṣṭha, equivalent to mid-May to mid-June. The literal meaning of the Sanskrit term Śruta-pañcamī  is ‘Scripture Fifth’ and the festival commemorates the day on which the Jain scriptures are supposed to have been first written down.

In the Digambara understanding, Bhūtabali and Puṣpadanta were Jain monks who compiled the available teachings and wrote them on palm leaves around 150 CE. Called the Ṣaṭkhaṇḍāgama – ‘Scripture in Six Parts’ – this body of holy texts is considered to be the ultimate source of the Jinas‘ teachings for the Digambaras.

The celebrations during Śruta-pañcamī are basically the same as those at the heart of Jñāna-pañcamī. Manuscripts, books and religious teachers are at the centre of the festival. The former are worshipped and new copies of the sacred writings are produced in manuscript or print. Monks are praised in hymns dedicated to them, celebrating their activities in the area of teaching and preserving the scriptures. Again, Sarasvatī may be worshipped as the patron deity of learning.

The Digambara festival is oriented more towards the spiritual elements of the holy day than the Śvetāmbara Jñāna-pañcamī. In honouring Bhūtabali and Puṣpadanta as the original models of scriptural transmission, Śruta-pañcamī focuses on religious knowledge without the blending of worldly concerns found in the Śvetāmbara equivalent.

‘Is a Manuscript an Object or a Living Being?: Jain Views on the Life and Use of Sacred Texts’
Nalini Balbir
The Death of Sacred Texts: Ritual Disposal and Renovation of Texts in World Religions
edited by Kristina Myrvold
Ashgate; Aldershot, Hampshire UK; 2010

Some features of the annual Digambara festival of knowledge – Śruta-pañcamī – are demonstrated in this YouTube video, such as the worship ritual and the procession of holy texts. Temple rites include the ritual anointment of freestanding metal plaques representing holy texts and idols, accompanied by jangling percussion. The main part of the ritual shown in this video centres around the worship of the śruta-skandha-yantra, a plaque made of brass in the form of a tree, which represents the kinds of scriptures Digambaras recognise. Carried in procession, the sacred books are garlanded with flowers and flanked by attendants using fly-whisks, which indicate the princely status of the artefacts, while devotees kneel before a naked monk and touch his feet. The Ṣaṭkhaṇḍāgama, the main authoritative source of Digambara teachings, is the book worshipped here.

This three-part YouTube video records the festival at Mudalur, Tamil Nadu in India, held over 28th and 29th May 2009. This is the first part and you can watch the second part at: http://www.youtube.com/watch?v=M-I9AYjIcAc

The procession of holy texts in the annual Digambara festival of knowledge – Śruta-pañcamī – is the main subject of this YouTube video. As the centre of festivities, the sacred books are decorated with flower garlands. They are placed on a model elephant, protected from the sun by a canopy and fanned with fly-whisks, all symbols of royalty. The Jain flag is waved in front. Lay Jains, many dressed in orange – the colour of spirituality in India – take part in the noisy procession. Some carry the metal sculptures of the 12 dreams of a Jina’s birth. A nude monk, holding his peacock-feather broom, and white-clad nuns also participate. The procession ends with a display of holy books, the reflection of which is ritually anointed, and a rite of worship in which the auspicious symbol of the svastika can be clearly seen.

This three-part YouTube video records the festival at Mudalur, Tamil Nadu in India, held over 28th and 29th May 2009. This is the second part and you can watch the last part at: http://www.youtube.com/watch?v=zR21K-vcp5U

This YouTube video follows the end of the first day’s events of the annual Digambara festival of knowledge – Śruta-pañcamī. First, a rite of worship before a brightly coloured rangoli – a design of coloured powder or rice symbolising joy and welcome – is performed. The lay community files past the rangoli and metal sculpture representing knowledge while monks and lay people chant a Sanskrit hymn. This song praises knowledge, omniscience, the scriptures and the goddess Sarasvatī, who embodies knowledge. Behind the rangoli piles of holy books can be seen, which have been carried in procession through the village as guides to knowledge. After the fire ritual, an inititation ceremony – dīkṣā – of a new monk, featuring keśa-loca  – ‘pulling out of the hair’ – takes place before the crowd. Afterwards, they move trays of fire in circles – āratī – offering pūja or worship to the new mendicant. An anointing ceremony – abhiṣeka – of the māna-stambha pillar found in front of Jain temples follows, with a final procession past the symbols of knowledge.

This three-part YouTube video records the festival at Mudalur, Tamil Nadu in India, held over 28th and 29th May 2009. This is the final part and you can watch the first part at: http://www.youtube.com/watch?v=5S2bcehoy-U

The British Library Board Or. 13806 Hemacandra and Śrīvallabha-gaṇi perhaps 15th century