The god Brahmadeva or Brahmayakṣa has come to be identified with Brahmā, the yakṣa or male attendant deity of the tenth Jina, Śītalanātha or Lord Śītala. He has gained the status of an independent god worshipped as a deity in his own right. It is unusual for a yakṣa to have this role, especially as Brahmadeva’s female counterpart, the yakṣī Aśokā or Mānavī is not considered an individual goddess.

As a god, Brahmadeva or Brahmayakṣa is a soul subject to the cycle of birth and can intervene in human affairs, unlike Jinas, who are liberated, perfect souls, completely detached from everyday human experience. Lay Jains worship gods partly to request help with worldly matters, ranging from issues of health and fertility, and passing examinations to business success. By the tenth century several of the śāsana-devatās had developed into independent gods at the centre of their own cults. This may be because of their connections with the major Jinas, links with a prominent pilgrimage centre or various stories of their powers.

Brahmadeva seems to be a clear example of an originally non-Jain god who was absorbed into the Jain fold in the course of time. He has gained a visible presence within Jain temples through his installation on the so-called Brahmadeva-stambhas. He is a guardian deity popular principally among Digambaras and is worshipped chiefly in southern India, particularly Karnatak. 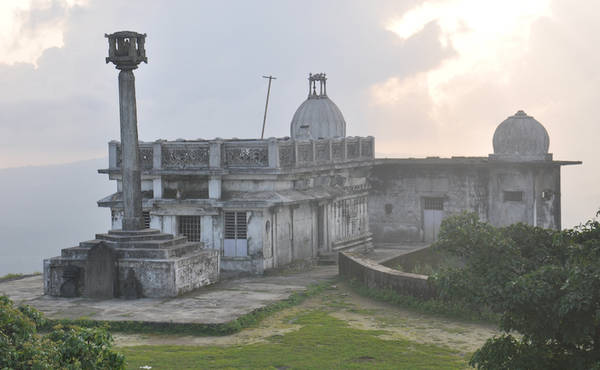 Brahmadeva as an independent god in Jainism has gained importance because of his presence on the so-called Brahmadeva pillars, which are found in the precincts of Digambara temples, mainly in south India. A protective deity, at some point he has been identified or confused with Brahmā, the yakṣa of the tenth Jina, Śītalanātha or Lord Śītala, even though they look quite different. They are now generally considered to be the same divinity.

Initially, Brahmadeva seems to have been a powerful tribal god in coastal Karnatak. He ‘appears to have forced his entry into the fold of Jainism […and] the Brahmadeva cult also began to gain in importance. Brahmadeva even became one of the Yakṣas, but he retained most of his former characteristics of the tribal war-god’ (Settar 1971: 35–36). This process can be said to go back to around the 15th century.

Literary evidence in Kannara shows that this Brahmadeva had become popular by the 16th to 17th century. For example, an inscription from the 16th century:

mentions that when the Caturmukha basti [temple] was erected at Karkala in the South Kanara or Mangalore District, the images of the Jinas were set up in the niches at each entrance of the outer enclosure of that temple, ‘together with Brahma and [the goddess] Padmāvatī to the left and right’ and provisions were made for the worship of all these

In addition, the 17th-century poet Candrama invokes him as follows: ‘I salute Brahma, the brave one, who having scattered the enemies with the hooves of his steed, climbed the hill and stood on the pillar, still looking for the foes’ (quoted in Settar 1971: 36). This statement refers to distinctive features of Brahmadeva’s iconography, suggesting that the Brahma-stambhas – the pillars associated with the deity – were a common sight by then. 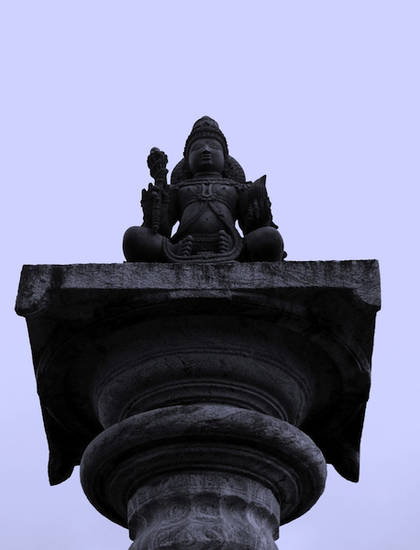 Both yakṣas and yakṣīs are considered part of the entourage of the Jina image, technically known as parikara. Like all of the attendant deities, Brahmā has certain features that help to identify him and indicate his powers. These are described in, for example, texts on the iconography of the Jina, which outline the appearance of the Jina’s attendants.

Being presented as a deity implies that Brahmā has special characteristics linked to the depiction of gods in art. This means he:

Both the principal Jain sects see Brahmā, the yakṣa of the tenth Jina, as having four faces, three eyes and eight hands, and sitting on a lotus flower. But such representations are rarely found in Jain temples. The usual images have one face and two or four hands.

The four-armed images grasp his attributes of a fruit, club and noose in a hand each. The fourth hand makes the gesture of granting safety – abhaya-mudrā.

In the case of idols with eight arms, the other four hands each hold a:

Brahmadeva is also frequently depicted riding a horse. Together with his attributes, which are weapons or weapon-like, this hints at his original identity as a warrior god. He thus fulfils his role as a guardian or protector deity. 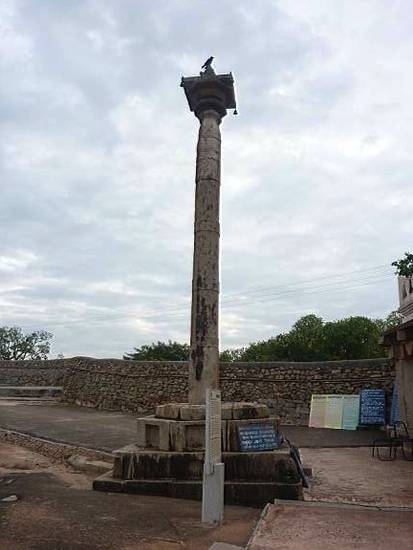 The most prominent visible expression of Brahmadeva’s presence is the monolithic, freestanding stone pillars within the precincts of Digambara temples. A pillar is often so tall that it can be seen from a distance before the temple itself. Found mainly in south India, these are the Brahmadeva-stambhas or Brahma-stambhas.

A column is located at the entrance of a temple or in front of colossal images of the Jain saint Bāhubali. At the top of the pillar sits the figure of Brahmā. The idol has a different appearance from the yakṣa Brahmā, in that ‘he is usually seated, holding a club or sword and a fruit, or with one hand in the safety-granting gesture – abhaya-mudrā’ (Hegewald 2011: 148). A carving at the base of the column shows Brahmadeva standing or riding a horse and carrying a sword in his right hand.

Instances of such pillars in Karnatak are the:

It seems that such columns are a development of the traditional kind of monolithic pillar known as māna-stambha – ‘pride pillar’. These had at the top a Jina statue with four faces – a catur-mukha or cau-mukha Jina. The figure of a yakṣa at the top could be a replacement (Settar 1971: 31). Inscriptions written on the pillars bearing yakṣas refer to them mostly as māna-stambhas. In common parlance, they have come to be called ‘Brahmadeva-stambhas’.

It is not known when this move from Jina to yakṣa happened, but this practice is evidenced only in Karnatak or south India. The earliest images of a yakṣa atop a column in this region depict Sarvāhṇa, who was installed and worshipped in Jain temples from the seventh to the 12th centuries. He is a muscular and pot-bellied figure shown standing on a round base, with an elephant at his feet and a miniature Jina in his crown. Images of him started to be installed at the top of monolithic pillars in the tenth century.

Evidence of Brahmadeva columns is found mainly in western and southern Karnatak.

Images of Brahmadeva on his horse, or of his horse, are housed in shrines or maṇḍapas and venerated all over Karnatak (Hegewald 2011: 152).

On the other hand, pillars have often not remained standing alone in the open air. Large superstructures have increasingly been built around them. Significant examples are the:

Brahmadeva images can also be housed in small shrines raised on small terraces. These are known as brahma-stana in coastal Karnatak.

Isolated bronze or stone images of this divinity are found in Karnatak (Settar 1971: 36). They are not earlier than the 12th to 13th centuries.

Brahmadeva is said to be the protector of the holy site of Nitani in Karnatak (Wiley 2004: 59). 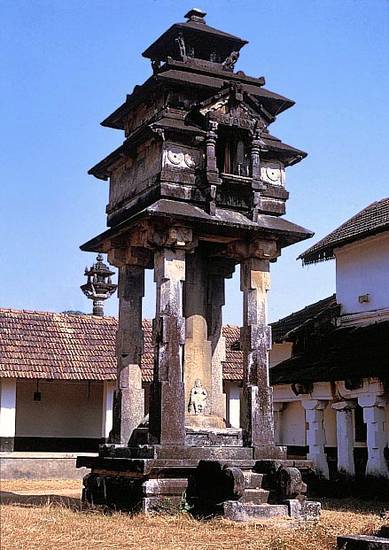 Today, Brahmadeva on the Brahma-stambhas is worshipped as a guardian of the temple precinct. He is the focus of religious rituals in the same way as other Jain divinities.

Since Brahmadeva is believed to protect the temple where his image resides, there may also be local ceremonies honouring him at different times in various temples. In addition, some temples have addressed the practical aspects of performing worship ceremonies to a deity sitting on a tall column.

For example, at Guruvayanakere in Karnatak, there is a particular yearly ceremony at the time of the festival of Nava-rātrī, which takes place around October. ‘Only the head priest, responsible for the temple complex, is allowed to climb a temporary ladder and to venerate the sacred statue contained in the raised shrine’ (Hegewald 2011: 154).

The difficulty of accessing the Brahmadeva image at the top of high pillars makes worship a strain. This is one of the factors that have led to the erection of smaller columns so that devotees can more easily see the image at the top. One example is the statue of Brahmadeva at the Digambara Pārśvanātha temple in Hassan, Karnatak. This idol is on a pillar-like base, but is only elevated about one and a half metres above the ground (Hegewald 2011: 158).

‘The Brahmadeva Pillars: An Inquiry into the Origin and Nature of the Brahmadeva Worship among the Digambara Jains’
S. Settar
Artibus Asiae
volume 33
1971

The Jain Heritage Centres website provides this photograph of a colourful figure of Brahmadeva or Brahmayakṣa taken in a Digambara temple in Bangalore, Karnataka,. A guardian god who is also the yakṣa – attendant deity – of the tenth Jina, Śītala, Brahmayakṣa is often depicted riding a horse.

A wall carving of Brahmadeva or Brahmayakṣa on the Jain Heritage Centres website. The yakṣa male attendant deity – of the tenth Jina, Śītala, the god Brahmā is believed to guard temples. He is frequently depicted riding a horse and holding weapons that help him to protect the temple.

The Jain Heritage Centres website provides this photograph of a decorated image of Brahmadeva or Brahmayakṣa, the attendant deity of the tenth Jina, Śītala. This Digambara image, from a temple in Bangalore in Karnataka, shows him holding weapons and riding a horse in his role as guardian god of the temple. It has been garlanded with flowers and anointed with precious substances in a recent ritual of worship.