Nākoḍā Bhairava is a protective male deity worshipped in Nākoḍā, a Śvetāmbara Jain pilgrimage site – tīrtha – in western Rajasthan. He is very popular in the Śvetāmbara community, but also well known among Jains in general. Nākoḍā Bhairava is famous for his miraculous powers, granting boons and possessing his devotees.

Many Jains do not condone Nākoḍā Bhairava’s popularity and believe that he has nothing to do with Jainism at all. Even so, both lay and ascetic Jains take part in his cult.

Nākoḍā Bhairava is particularly popular among Jain shopkeepers, who often keep images of him in their shops. The bhairava appears in various stories connected to the site and is today known for his ability to help devotees achieve various worldly goals such as better health and material gain. The bhairava is also believed to enter the bodies of devotees, effectively possessing them, sometimes communicating auspicious messages through them. 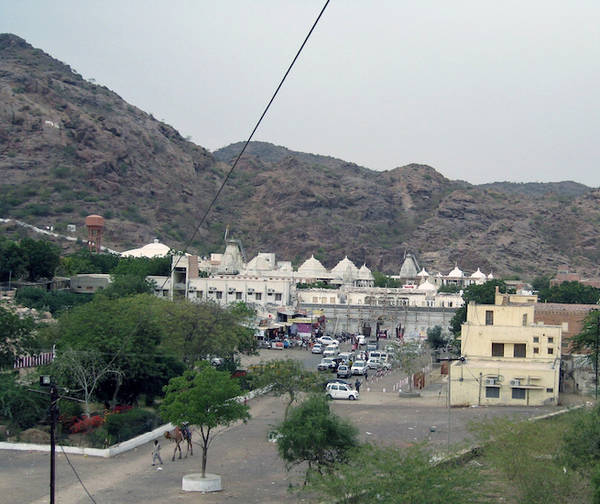 According to the site’s own history, Jains have resided in Nākoḍā since the second century following the nirvāṇa of the 24th Jina, Mahāvīra, which is 527 BCE in traditional Śvetāmbara dating. From this time onwards various Jain activities are reported, such as temple constructions and visits from famous monks, including the influential philosopher Haribhadra. There are stories of Jain statues that were hidden underground to protect them from attacks by intolerant rulers and chieftains during the first half of the second millennium. Many such statues were forgotten and some are still dug out today. The statue of Pārśvanātha or Lord Pārśva in Nākoḍā – Nākoḍā Pārśvanātha – was rediscovered in this way in 1455.

According to the story, a Jain lay man had a dream in which Nākoḍā Bhairava told him of the long-forgotten statue of Pārśvanātha or Lord Pārśva, the 23rd Jina, and where it was hidden. The statue was then discovered and installed in the Nākoḍā temple by the Kharatara-gaccha monk Kīrtiratna-sūri. As Kīrtiratna-sūri was carrying the rediscovered statue of Pārśva, people spontaneously formed a procession behind him. They saw Nākoḍā Bhairava in the form of a boy dancing and walking with them, eventually causing them to stop in Nākoḍā. Kīrtiratna-sūri decided to keep the Pārśvanātha statue there and installed the aniconic image – piṇḍākar – of Nākoḍā Bhairava by the temple entrance. Similar stories are found in other pilgrimage sites.

The site was later abandoned until the Tapā-gaccha nun Sundarśrī came to the Nākoḍā temple at the beginning of the 20th century and decided to spend the rest of her life working on its restoration. She raised funds and interest in the site, actively propagating the cult of Nākoḍā Bhairava, which gave rise to her nickname of the ‘Saviour of Nākoḍā Tīrtha’ – tīrthoddhārikā. The official trust overseeing the site was established in 1924. 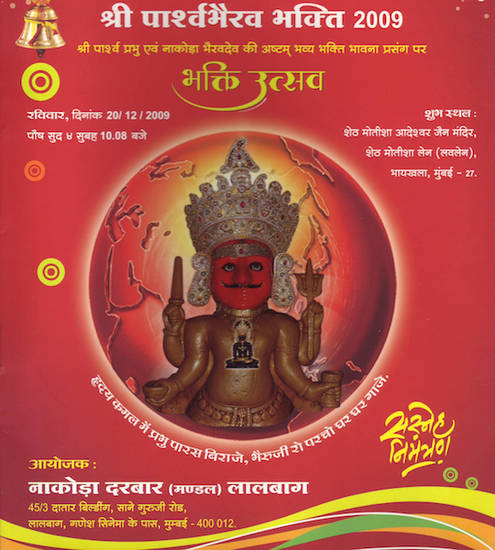 The word bhairava is a generic term used all over South Asia to denote some form of deity. It is derived from the Sanskrit verb root bhī, meaning ‘terrible’, ‘frightening’. The name ‘Nākoḍā Bhairava’ thus means the ‘bhairava of Nākoḍā’. Although it is not clear what the nature of Nākoḍā Bhairava and his cult was before he was installed in the Jain temple, it seems reasonable to assume certain points.

Firstly, at some point Nākoḍā Bhairava was a local deity without strong links to Jainism, similar to the many other bhairavas found in Rajasthani villages.

Secondly, it can be assumed that he was incorporated into a more defined sphere of Jain religious activity and infrastructure, much like other protective deities such as the goddess Saciyā Mātā.

The many bhairavas found all over India tend to be associated with the Hindu god Śiva, whose favourite weapon, the trident, is found in one of Nākoḍā Bhairava’s hands. Supporting this connection to Śiva are two things. The first is magic formulas – mantras – in some of the hymns to Nākoḍā Bhairava. Secondly, there are popular emblems with an image of Nākoḍā Bhairava next to a sacred diagram – yantra.

While often referred to as a guardian deity – rakṣakdev or adhiṣṭāyak deva – Nākoḍā Bhairava is also understood to be a lay follower of Jainism. This greatly affects the financial standing of the Nākoḍā trust since money donated to Nākoḍā Bhairava is interpreted as being donated to a lay man and not a statue in the system of the seven fields of donation. This gives the trust freedom to direct investment to other things than the construction and refinement of statues and temples, such as the research institution Prakrit Bharati Academy in Jaipur. 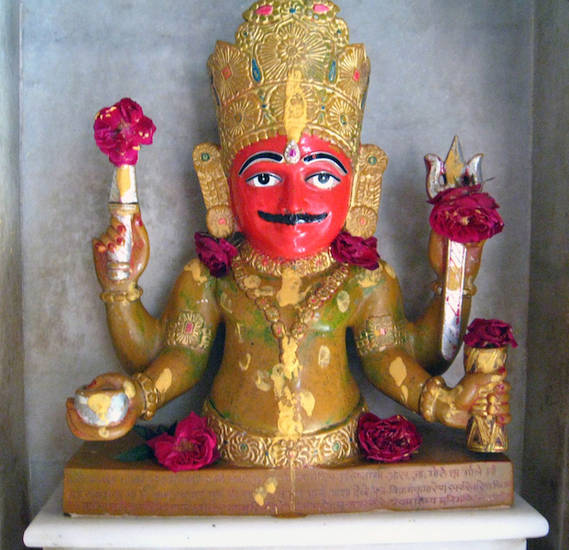 In 1934 a new statue of Nākoḍā Bhairava was fashioned on the instruction of Jain mendicants after his true form – svarūp – had been revealed in the dreams and visions of various individuals. One of these was the Tapā-gaccha monk, Himācal-sūri. He installed the three-dimensional bust statue of Nākoḍā Bhairava inside the temple, next to Nākoḍā Pārśvanātha. It replaced the previous image, which did not depict Nākoḍā Bhairava as a human-like figure.

In his present anthropomorphic form, Nākoḍā Bhairava has a red, moustachioed face and four arms. Many gods have four arms in Jain art. In each hand he holds an item associated with bhairavas all over India, namely:

Many replicas are found both inside and outside India, reflecting his popularity. These shrines are the scene of religious ceremonies similar to the worship rituals surrounding the original Nākoḍā Bhairava. 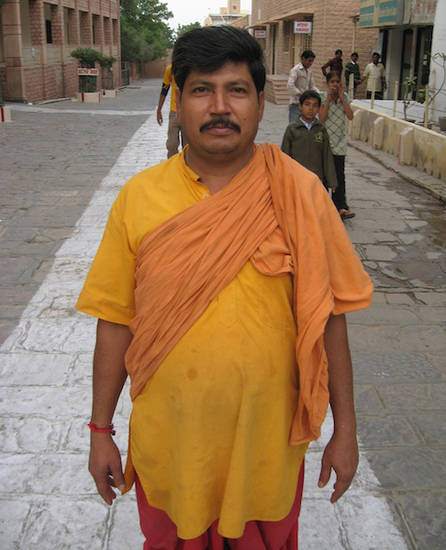 Although Nākoḍā Bhairava is secondary in the Śvetāmbara temple of Nākoḍā Pārśvanātha, he is a popular figure of worship. Nākoḍā Bhairava is a deity subject to the cycle of rebirth and thus can intervene in the world of human affairs, unlike a Jina who is a liberated soul. Worshippers pray to Nākoḍā Bhairava for help in worldly concerns, particularly wealth. There are two unusual elements associated with the worship of Nākoḍā Bhairava, which are more common in Indian religions in general than among Jains. First, he is well known for possession of his devotees. Secondly, the auspicious offerings of sweets – prasāda – are considered unlucky if taken outside the temple premises.

Morning and evening pūjās and āratīs are held daily for Nākoḍā Bhairava, but always after the main image of Pārśvanātha or Lord Pārśva has been worshipped. The pujārī draws a curtain in front of the closest sitting Pārśva image during the worship of Nākoḍā Bhairava. A way of preventing Pārśva from being offended, the drawing of the curtain is rare in Jain religious practice, although it is familiar to Hindus. All rituals are led by the Hindu pujārīs and the winners of auctions – bolis – held for the various parts of the worship. For the Pārśva idol these offerings include:

The worship of Nākoḍā Bhairava consists of only the last three ceremonies. The highest auction bids are put forward for the lamp ceremony honouring the bhairava. The ritual of the ‘sacred gaze’ – darśana – and donating to the bhairava are both thought to be particularly auspicious during the evening lamp ceremony.

Many worshippers consider Sundays a particularly auspicious day for worship of Nākoḍā Bhairava. Evening gatherings with hymn singing – bhajan – often take place at the weekends or on special occasions.

Many people perform a ‘sacred gaze’ – darśana – of Nākoḍā Bhairava upon arrival. The temple is arranged so that visitors pay their respects to the main figure of Pārśva first. Prayers are often performed while gazing at Nākoḍā Bhairava.

Some devotees report that they donate sums of money they have promised if their wishes are fulfilled. Many Jain businessmen consider Nākoḍā Bhairava to be their business partner and donate percentages of their yearly income to him. 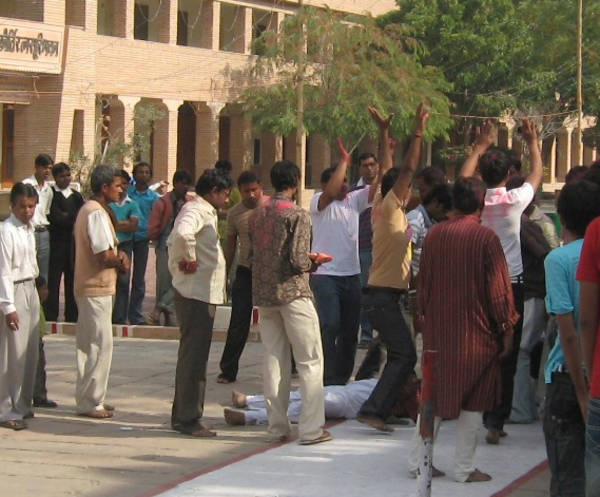 It is especially during the singing of evening āratīs on Sundays that Nākoḍā Bhairava is known to possess devotees. Some of the possessed devotees will answer questions from the other worshippers on issues of health and future outcomes.

Nākoḍā Bhairava appears to be particularly prone to possess devotees during the yearly fair – melā – held around the birthday of Pārśvanātha or Lord Pārśva. Pārśva’s birthday is celebrated in the festival of Poṣa-daśamī, which falls in late December or early January and is celebrated by all Jain sects.

This is also an occasion where non-Jains come to worship the bhairava. Jains allow non-Jains to take part in the regular worship of the bhairava and he also possesses them at times. 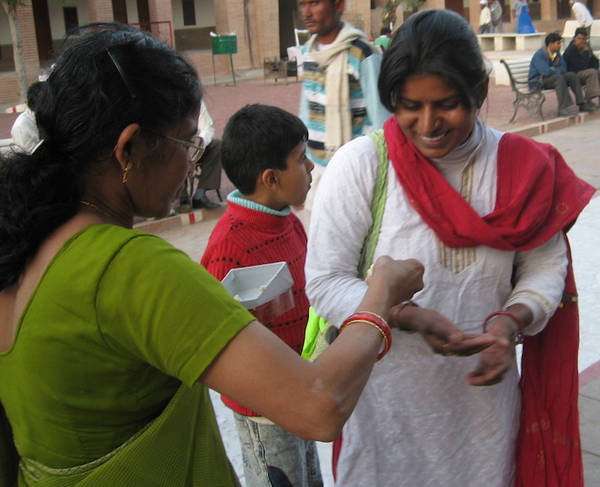 A second unusual tradition relates to sweet offerings given to Nākoḍā Bhairava. A portion of these offerings is kept and later consumed by devotees as auspicious offerings – prasāda. This prasāda is to be eaten within the temple complex. If prasād is taken outside, it is widely believed that some misfortune might happen.

Car accidents and sickness are reported as resulting from breaking this unwritten rule. The local bus driver is known to habitually demand that the passenger who has taken prasād from Nākoḍā should go back and ask for forgiveness whenever his vehicle breaks down.

The Nakoda Bhairav website provides information about the Śvetāmbara temple at Nakoda, Rajasthan but focuses on presenting hymns, pictures and songs celebrating the Śvetāmbara protective deity Nākoḍā Bhairava. Website visitors can read and listen to hymns and download them, along with pictures of Nākoḍā Bhairava's statue. There is also an e-book in Hindi to read online or download.

A Facebook group called Nakoda Bhairav provides information in Hindi and lots of picture of images of the Śvetāmbara guardian god Nākoḍā Bhairava.

A Facebook group called NaKoDa Ji ThE jAIN tirTH provides information in Hindi about the popular Śvetāmbara deity Nākoḍā Bhairava, including pictures of various images of him.

Facebook provides a picture of an idol of the Śvetāmbara protective god Nākoḍā Bhairava housed in the Jain Center of Northern California, in Milpitas, California.

This YouTube video from 2010 records a Śvetāmbara 'great lamp ceremony' – mahāratī – performed in front of a Nākoḍā Bhairava image in Indore, Madhya Pradesh. A possessed man is seen in the second half of the film. The scenes are very similar to those seen in Nākoḍā, Rajasthan, where the original Nākoḍā Bhairava statue is situated.

A song dedicated to Nākoḍā Bhairava, the protective Śvetāmbara deity in Rajasthan, is available to listen to or download from Soundcloud.

A recording of a Śvetāmbara 'great lamp ceremony' – mahāratī – to Nākoḍā Bhairava, sung by a group of male and female singers, is available to listen to or download from Soundcloud.