Subhadrā is named in the Kalpa-sūtra as the leader of the lay women under the first Jina, Ṛṣabhanātha or Lord Ṛṣabha. She is described as a virtuous woman – satī – in the Āvaśyaka-sūtra and her story first appears in Jinadāsa’s Āvaśyaka-cūrnī. Subhadrā is one of the 16 satīs, or soḷ

satī. She is included in the longer satī lists and her story is told in nearly all satī collections.

The tale of Subradha illustrates the rewards of remaining loyal to Jain beliefs even when under pressure to give them up.

Subhadrā was born into a good Jain family, daughter of the king’s minister in Campa. In some versions her father is a merchant named Jinadatta. Subhadrā was very devout and her father wanted to marry her to a religious Jain of a good family.

One day a young Buddhist man named Buddhadās visited Campa, saw Subhadrā and fell in love. Buddhadās found out that Subhadrā’s family was looking for a good Jain husband for her, so he changed his name to Jinadās and pretended to be a Jain. He stayed with some Jain monks after claiming to have taken a vow to live temporarily like a monk. Jinadās-Buddhadās met Subhadrā’s father and lied to him about all the Jain vows he had taken. Subhadrā’s father was fooled and decided to marry Subhadrā to Jinadās-Buddhadās. 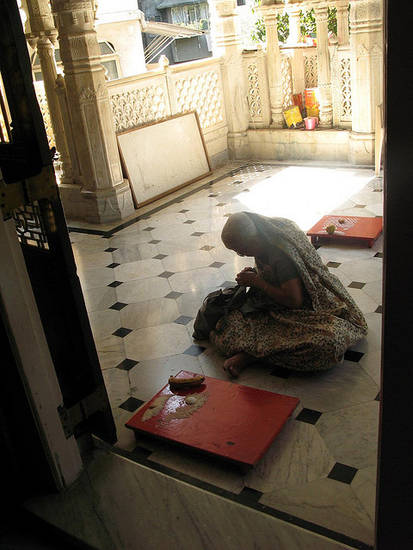 One day a Jain monk who had been fasting for a full month came for alms to break his fast. The monk was in pain because of a piece of straw caught in his eye. Subhadrā wanted to help him, so she removed the straw from his eye with her tongue. Her red forehead mark stuck to the monk’s forehead as she did this.

When Subhadrā’s mother-in-law saw the red mark on the monk‘s forehead she said to Jinadās-Buddhadās: “Look, son! What kind of wife acts like this? She is shameless and that monk is filled with lust.”

Thus the mother-in-law stirred up trouble. Jinadās-Buddhadās believed that Subhadrā was disgraceful and beyond any hope of redemption.

Subhadrā did not know what to do so she vowed to stay in motionless meditation – kāyotsarga – until her name was cleared.

While she was deep in meditation, the guardian goddess who protects Jains came to her and said, “Hey, daughter, tomorrow morning your disgrace will be banished. I will speak as a voice from the sky. Do exactly what I say.”

Then the goddess left her.

The next morning no one could open the gates to the city. The king asked for any ideas when out of the sky came a voice, saying: “O King! Do not worry. Once a true woman – satī strī – draws water from this well with a sieve on a weak cotton thread and throws the water at the gates, then they will open.”

After the king heard this he called for all true women to come and try to open the gate. Many tried but none could keep water in the sieve. Everyone began to worry.

Subhadrā told her mother-in-law that she would open the gate.

Her mother-in-law became very angry and cried, “O sinful woman! In just one act, you have already shamed our family! What more do you want?”

Subhadrā humbly said, “I will ask the goddess. If she says yes, I shall open the gate.”

Just then a voice came from the sky: “Go and open that gate!”

Having heard this, Subhadrā went through the crowds of thousands of men and women. She drew water from the well with a sieve on a weak cotton thread and threw it on the gates. Three of the gates unlocked miraculously, but the fourth was still shut fast.

The goddess appeared and announced to the crowd, “I will only open the last gate when a true woman comes before me.”

Subhadrā bowed before the goddess and the gate opened. Everyone saw the miracle.

Then her mother-in-law asked for Subhadrā’s forgiveness and her husband’s family converted to Jainism.

At the end of her life, Subhadrā became a nun, destroyed her karma by fasting and attained liberation. 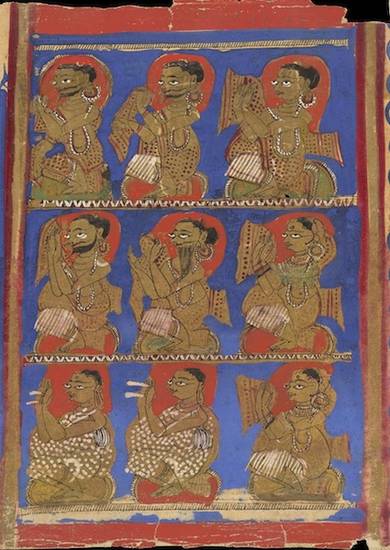 Subhadrā is mentioned in Jain texts dating back hundreds of years. Her quiet steadfastness in her Jain faith has made her story a popular choice in collections of sermons and moral tales. As a virtuous woman, Subhadrā also features in collected biographies of the soḷ satī and the longer list of satī.

The fifth-century Kalpa-sūtra gives Subhadrā as the head of the lay women under Ṛṣabhanātha or Lord Ṛṣabha, the first Jina. She is also named as a virtuous woman – satī – in the Āvaśyaka-sūtra. The earliest version of Subhadrā’s tale is found in the Āvaśyaka-cūrnī of Jinadāsa.

Subhadrā’s story is found in the popular 18th-century collection of sermons, the Upadeśaprasāda, as an example of the ultimate rewards for fidelity to the Jain religion. The account appears in contemporary satī collections and is occasionally retold orally by contemporary Jains, but is not usually published as a story by itself.

Guardians of the Transcendent: An Ethnography of a Jain Ascetic Community
Anne Vallely
University of Toronto Press; Toronto, Canada; 2002