The wife of King Śrīpal, Madanasundarī is the model wife of the Śvetāmbara Mūrti-pūjāk Jain satī tradition. She is usually called Mayṇāsundarī or Mainasundarī in modern versions of her story.

The story of Śrīpal and Mayṇāsundarī is widely known from the Śrīpal Rājā no Rās, written in Gujaratī by Vinaya-vijaya and Yaśo-vijaya in 1682. It is the basis of many forms of the story, which remains popular in the present day.

The tale of Mayṇāsundarī makes her the paramount model of a Jain woman. Her actions in the tale – revealing religious devotion, teaching proper religious practice to her family and readiness to accept wifely duties – create a happy and healthy family life after early difficulties. Even so, Mayṇāsundarī is not on the lists of satī, such the 16 satīs – soḷ satī – or those satīs listed in the Bharahesvar Bahubali Sajjhay. However, she is called a satī in all accounts and is widely named in Jain popular culture as a key virtuous woman.

When it was time for them to marry, King Prajāpāḷ let his daughters pick their husbands. Sursundarī chose a husband according to her taste and her father’s wishes, but Mayṇāsundarī refused. She gave her father a lecture on how she would be married to the husband that fate and karma selected. Prajāpāḷ became angry and decided to prove that it was he and not fate or karma that would determine his daughter’s destiny.

Marriage to the king of the lepers

Earlier, when a coup in Campa city had killed King Ajitsen, Queen Kamaḷprabhā and Prince Śrīpal had fled the palace. They found refuge hiding among a community of seven hundred lepers. Śrīpal caught leprosy and the lepers then named him their king.

Queen Kamaḷprabhā was a Jain and consulted a Jain monk, who assured her that her son would have a religious wife – a dharma patnī – and that his leprosy would go away.

Soon after Mayṇāsundarī’s refusal to choose a groom, Śrīpal and the seven hundred lepers arrived in Ujjain. The king invited Śrīpal, king of the lepers, to the palace and offered him Mayṇāsundarī in marriage.

Śrīpal said, “You should not marry such a beautiful girl to someone like me.”

But the king replied, “No – she said her karma will determine her fate, so she will marry you.”

Mayṇāsundarī’s mother was so upset that she left her husband and returned to her brother’s house. In her last conversatīon with Mayṇāsundarī, she told her to never give up her religion.

Mayṇāsundarī insisted on joining Śrīpal in the jungle with the lepers, rather than staying at home in the safety of the palace.

People began to speak scornfully of Jainism since it had led Mayṇāsundarī to show disrespect to her father and to marry a leper. 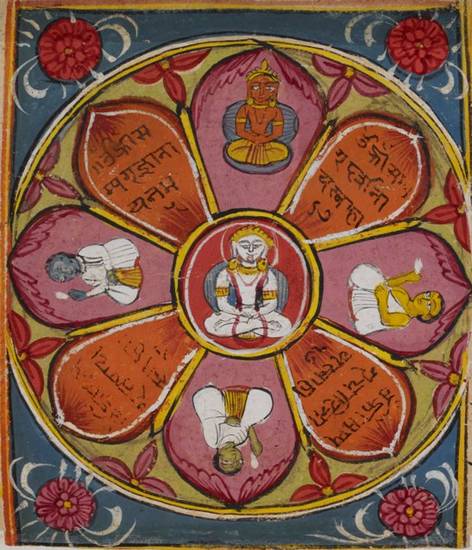 After the wedding Mayṇāsundarī insisted that she and her new husband worship an image of Ṛṣabhanatha or Lord Ṛṣabha, the first Jina, and get the blessing of a Jain monk. When she performed the rite of worship a flower fell from the offering to the image into the folds of her sari, which was an auspicious sign.

After completing the ritual the couple went to seek the blessing of Candra-sūrijī.

Mayṇāsundarī told the monk, “People are saying bad things about Jainism because of my marriage to a leper.”

She asked the monk what she could do to help people understand the truth about Jainism and requested a mantra.

The monk told Mayṇāsundarī to recite the Navkār-mantra and to perform nine sets of nine āyambil fasting days twice a year. This would take four and a half years. “At the end of this fast,” he said, “you will see that your husband is a prince.”

Śrīpal and Mayṇāsundarī together performed this series of fasts, thereafter called the Navpad Oḷī fast or the Āyambil Oḷī fast. After they completed the fast Śrīpal was cured of leprosy. Then he was revealed to be not merely the king of the lepers, but Prince Śrīpal, son of King Ajitsen.

The water left over from their rites of worship was then used to cure all the other seven hundred lepers. 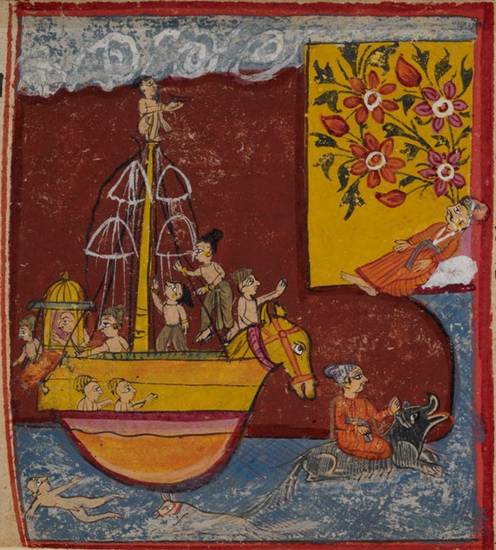 After everyone was healed, Śrīpal and Mayṇāsundarī returned to his mother and touched her feet in a gesture of honour. Queen Kamaḷprabhā was thrilled to see her son healthy again and to meet her lovely and auspicious daughter-in-law.

When Mayṇāsundarī’s mother arrived she did not recognise her now-healthy son-in-law. She wept, ashamed that Mayṇāsundarī had brazenly taken a new husband. After she realised he was really Śrīpal, Queen Kamaḷprabhā told her the story of how Śrīpal had come to be a leper. Mayṇāsundarī’s mother insisted that they teach her husband he had been wrong to fault Jainism by showing him what a great husband Śrīpal had turned out to be.

Mayṇāsundarī then went to live in her uncle’s house with her mother-in-law, who loved her like a daughter, while Śrīpal sailed off to make his fortune.

While he was away Śrīpal had many adventures, during which his knowledge of the Navkār-mantra protected him. Aided by the mantra and his worship of the siddhacakra, Śrīpal achieved great wealth, and both he and Mayṇāsundarī enjoyed good health and happiness. They remained devoted to Jainism and, after eight happy lives as a married couple, Śrīpal and Mayṇāsundarī finally reached liberation.

There are numerous forms of the story of Śrīpal and Mayṇāsundarī, including songs, dramas and novel versions. The most widespread one is the 17th-century version by Vinaya-vijaya and Yaśo-vijaya. The availability of the story in modern technologies such as video and audio demonstrates its continued popularity.

Since then, the story of Śrīpal and Mayṇāsundarī has been retold in medieval and modern hymns, contemporary novel forms, oral retellings, dramatic re-enactments, audio cassettes and video dramas. Most widely known is the set of hymns that accompanies the Navpad Oḷī fast and the Navpad Pūjā liturgies.

The term Āyambil Oḷī is the name of both a twice-yearly festival and the associated fast. Falling in the spring and autumn, the festival is characterised by nine consecutive Āyambil Oḷī fasts over its duration. These nine fasts form the Navpad Oḷī fast.

The Āyambil Oḷī festival centres on veneration of the siddhacakra, the re-enactment of Mayṇāsundari’s fast and the story of Śrīpal and Mayṇāsundarī. Married women vow to perform a nine-day āyambil fast in imitation of Mayṇāsundarī’s fast, with the intention of protecting their husbands’ health and promoting marital happiness and well-being. Mendicants will often retell the story of Śrīpal and Mayṇāsundarī, emphasising the theme of married happiness at the core of the festival.

All forms of worship of the siddhacakra are linked to the tale of Śrīpal and Mayṇāsundarī. The Siddhacakra Mahāpūjā is the ceremony of worship most prominently associated with the ritual cluster and its powers, because it is the one performed together by Śrīpal and Mayṇāsundarī after his miraculous healing. It is thus credited with having healing powers and bringing good fortune and marital contentment.

The Jain eWorld website provides the well-known tale of Śrīpāḷa and Mayṇāsundarī. The story illustrates that accepting karma, worshipping the siddhacakra or navapada and staying true to religious beliefs are crucial to being a good Jain and moving towards liberation. The tale is part of the epic Śrīpāḷ Rājāno Rās, which recounts Śrīpāḷa’s adventures after he is cured of leprosy. The story is a major element in the festival of Āyambil Oḷī, which focuses on religious devotion, especially revolving around the siddhacakra yantra, and marital happiness.

The siddhacakra or navapada is a flower with nine sections representing the Five Supreme Entities and the 'Four Jewels'. It is thus a visual summary of key elements of Jain belief. Often known as a navpad nowadays, the siddhacakra is a mystical yantra used in worship rites. This photo on Flickr shows a Śvetāmbara siddhacakra, with an ornately bedecked Jina in the centre.

This sketch of a siddhacakra is found in a manuscript held in the National Gallery of Australia. The Svetāmbara yantra or mystical diagram has nine parts, representing key elements of Jain doctrine. In the centre of the stylised lotus flower is a Jina and around him on alternating petals sit the other beings that make up the five highest beings. On the petals between them are phrases representing the 'four fundamentals'.

Academic K. V. Mardia has created a diagram describing the different parts of a siddhacakra or navapada. The foremost Jain yantra, the siddhacakra summarises some of the holiest elements of the Jain religion.

The Yorkshire Jain Foundation in the UK provides a downloadable and printable PDF. You will need to have Adobe Acrobat Reader on your computer to open PDF files.

Lay woman Heeral Shah explains the different elements of a siddhacakra mahā-yantra. Provided by the Victoria and Albert Museum in London, this video also includes a transcript.

The Herenow4U website provides a picture of a siddhacakra or navapada mahā-yantra, the most popular yantra among contemporary Jains. This mystical diagram presents some of the main elements of Jainism. King Śrīpala and Queen Mayṇāsundarī, who are closely associated with it, are shown at the bottom demonstrating worship of the yantra.

Acharya Shri Shushil Muni explains the sacred colours of Jainism, which are found in several holy symbols, including the siddhacakra, the Namaskāra-mantra and the Jain flag. The information is provided by the Jainism Literature Center, associated with the Faculty of Arts and Sciences at Harvard University. 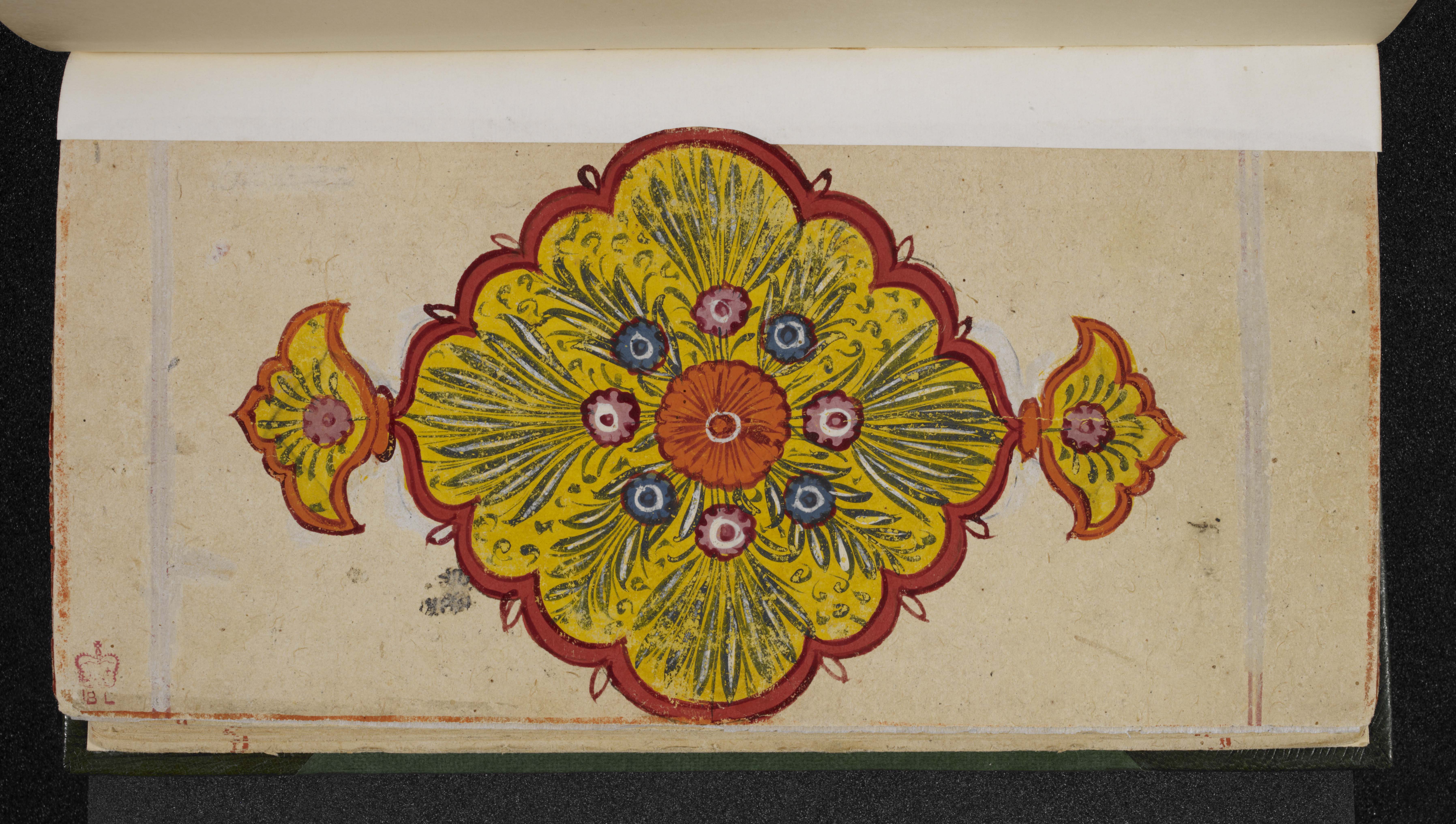