The Tattvārtha-sūtra is the only text that is accepted as an essential scripture by all Jain sects. There are disagreements about the date it was written and differences in the Digambara and Śvetāmbara versions but the text sums up key beliefs of Jainism and its authority remains strong. Commentaries reflect these differences but also emphasise the place of the scripture at the heart of the Jain tradition. 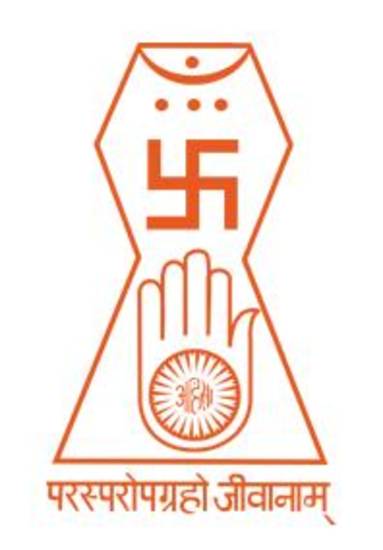 The full title of the Jain scripture known as the Tattvārtha-sūtra is Tattvārthādhigama-sūtra. It can be translated into English as Aphorisms on the Sense of Principles Aphorisms on the Understanding of Principles. Its title indicates the nature of the text and why it is widely considered to be the essence of the principal Jain beliefs.

The Tattvārtha-sūtra has three features that make it unique among Jain religious texts.

This is the reason the Tattvārtha-sūtra was selected to represent Jainism in the Sacred Literature Series. It is one of the books published by the International Sacred Literature Trust, which organises the publication of key texts in different faiths. It was translated into English under the title That Which Is. However, this does not mean that Śvetāmbaras and Digambaras agree on everything relating to this text.

Secondly, it is written in Sanskrit. The different scriptures which are thought of as canonical by the Śvetāmbaras and the Digambaras are in Prakrit.

Thirdly, its literary form is remarkable. Whereas the canonical scriptures are mostly lengthy texts, the Tattvārtha uses the sūtra style. This means extremely concise aphorisms or a general truth made up of only a few words. Some aphorisms have only one word.

An example of a Tattvārtha aphorism is parasparopagraho jīvānām (5.21) or ‘souls render service to one another’. This proclamation of the interdependence of beings has become a slogan of Jainism for many contemporary Jains. Literally, it means: ‘[there is] reciprocal dependence of living beings’.

The latter two features are noteworthy because they show that it was written to provide a vigorous summary of Jain principles for audiences who were familiar with both Sanskrit and the sūtra style. These audiences were probably specialists in various Indian philosophical doctrines, of yoga and so on. All Indian philosophical schools have their own text in Sanskrit and use the same sūtra style.

Among the Śvetāmbaras the author is known as Umāsvātī while the Digambaras call him Umāsvāmī. These two forms refer to the same person, but hardly anything personal is known about him. He is believed to have come from a brahmin family and later become a Jain monk.

The Tattvārtha-sūtra is regarded as his greatest work, but the Śvetāmbaras believe that he also wrote another text, the Praśamaratiprakaraṇa or Treatise on the Love for Tranquillity.

The question of the dates of the author’s activities and the composition of the Tattvārtha-sūtra has given birth to fervent discussions. It was probably written some time between the 2nd and 5th centuries CE.

Contents of the text

The Tattvārtha-sūtra is made up of hundreds of sūtras or aphorisms. Organised into ten chapters, these sūtras explore the seven tattvas or ‘realities’. Accepting the truth of these is the first step along the path of spiritual development that will lead, after a great deal of hard work and time, to final liberation.

Even though it is the only holy text accepted by the two main Jain sects of Digambaras and Śvetāmbaras, they have slightly different versions. These differences range from variations in some sūtras to disagreements over the interpretation and classification of some concepts in the text.

The Tattvārtha-sūtra is divided into ten chapters or adhyāyaya without titles.

To translate the distribution of Tattvārtha-sūtra material into modern terms, it is convenient to follow K. K. Dixit’s analysis (Ref. 3: 1974: 1):

In the latest English translation of the work, called That Which Is and published in 1994, the ten chapters have been given the following titles:

The total number of aphorisms or sūtras ranges from 344 to 357. The variation is explained by differences among Śvetāmbaras and Digambaras. Some sūtras may not be included by one sect while others may be divided into two or even combined into one.

In the text itself, the architecture of the whole work is built on the terms found in the initial sūtra. Many Jains consider it to be typical of the Tattvārtha-sūtra. 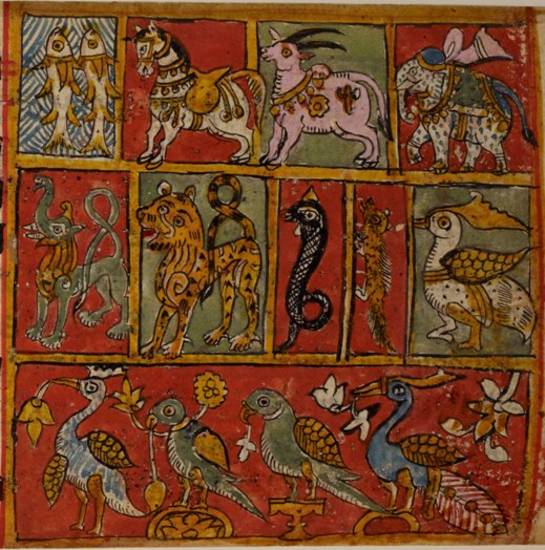 The basics of the Jain system are specifically mentioned here.

The aim is to be liberated or to reach salvation. This means to become free from the cycle of rebirth and leave for ever the world of transmigration. Hence the Tattvārtha-sūtra is also known by the name Mokṣa-sūtra or Aphorisms for Salvation.

A believer can reach salvation by following the principles of correct faith, correct understanding and correct conduct. The way these terms are arranged in the original text emphasises that all three together are necessary. They form the triplet commonly known as the ‘three gems’ or ‘three jewels’ – ratna-traya.

These terms are far from being obvious, and have been the starting point of considerable discussion, especially darśana – ‘faith, vision, intuition’. It comes first because it means that, before anything else, the individual must at least have a positive approach to the doctrine he is going to learn about and begin acting out. If he refuses certain basic principles at the start, there is no need for him to continue. Thus it is a crucial first step.

In practice, it means belief in tattvas. This means recognising the existence and truth of certain ‘realities’, ‘principles’ or ‘that which is’.

The seven tattvas are arranged logically. The first two lay out the basic ideas from which the rest follow. Numbers three to seven define the spiritual progression of the soul, while the last three directly relate to the concept of right conduct.

The seven tattvas are covered in chapters two to ten of the book. 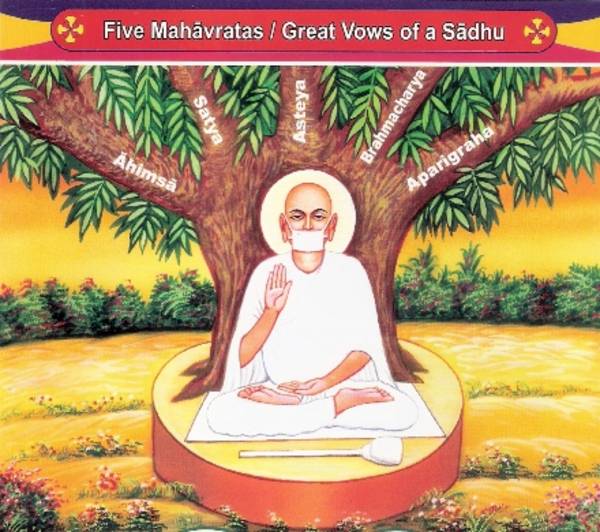 Chapter 1 can be thought of as the base of the building because it deals with understanding, types of knowledge and ways of knowing a given object.

Chapter 7 is central to Jain ethics because it deals with the vows – vrata – of the ascetics and householders. Placing it between chapters on how karma enters and is bound to the soul is justified by the fact that the way one behaves or the vows one observes decide karmic inflow and binding.

There are four main differences between Digambara and Śvetāmbara editions of the text.

Digambara and Śvetāmbara writers have discussed both the definition of ‘time‘ and the details of the sūtras at length in the commentaries. Despite sectarian disagreements over interpretations and categorisation of some items, all Jains admit the authority of the text. 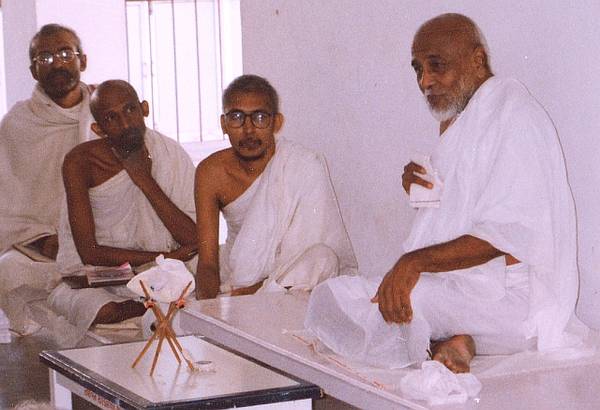 Understanding the meaning of each and every word of the aphorisms is not an easy task and thus the Tattvārtha-sūtra has sparked considerable activity in the form of commentaries. Both Digambara and Śvetāmbara scholar-monks have contributed to this body of work, ranging from simple explanations to, more often, very learned commentaries.

The earliest commentary is called Bhāṣya. According to the Śvetāmbaras, Umāsvātī himself created it, so they call this Bhāṣya svopajña, that is Written by [the author of the text] Himself.

The Digambaras dispute this and consider the Bhāṣya to be much later.

Among the prominent commentaries the Digambaras have written are:

Originally in Gujarati, this last work has been translated into English and is extremely valuable in understanding the principles of Jainism. 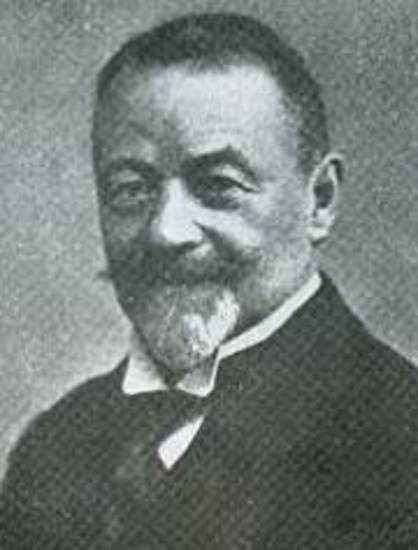 The first translation of the Tattvārtha-sūtra into a Western language was a German edition published in 1906 by Hermann Jacobi, one of the pioneering Western scholars in the field of Jain studies.

There are other significant texts in the Jain faith but several descriptions of Jain philosophy found in various European manuals are based on the Tattvārtha-sūtra because it gives the essence of Jain belief and presents it in a sūtra style. An example is Frauwallner’s 1956 presentation of Jain philosophy in his German-language publication, Geschichte der indischen Philosophie – History of Indian Philosophy.

The aphorisms of the Tattvārtha-sūtra are meant to be memorised and the text’s short length means that it can be carried around easily. Indeed, the Tattvārtha-sūtra frequently figures in the short collections of prayers and fundamental religious principles which many Jains carry with them. These are similar to Roman Catholic catechisms. Originally handwritten manuscripts, these collections are now available in print.

A Study of Tattvārtha-sūtra with Bhāṣya
Volume 86 of the L. D. Series is an attempt to assess the date of the Tattvārtha-sūtra using its treatment of some doctrinal themes and references to external data. It seems reasonable to locate it in the 5th century CE. The differences between Digambara and Śvetāmbara versions of the text are also discussed, as well as the status of the Bhāṣya and the question of knowing whether it has the same author as the sūtra itself.

Jain Spirit 01
This is issue 1 of Jain Spirit, covering July to September 1999.