The legends, stories and characters of the Mahābhārata, the Sanskrit epic attributed to the seer Vyāsa, became so popular throughout and beyond South Asia that Jains developed their own accounts. Jain poets composed distinctly Jain versions, situating the events of the Mahābhārata within Jain Universal History.

However, what are considered the Jain Mahābhāratas are not limited to the story of the Pāṇḍavas and the Kauravas, who are the main figures in the Hindu Mahābhārata. Jain versions of the Mahābhāratas also include:

In these ways, the Jain Mahābhāratas reinforce Jain beliefs and strengthen a sense of particularly Jain culture, though elements are shared with wider Indian society.

Though now a key part of the Hindu canon, the early forms of the Mahābhārata did not especially promote Hindu values or beliefs. One of the principal differences between the Jain and Hindu versions of the tale is the classification of certain characters and the perspective this gives the stories. This is one of the main features that make the Jain Mahābhāratas distinctly Jain even though there are many versions. These characters form part of Jain Universal History, a large body of texts that contains much of the mythology of Jain culture. The characters and narrative are also expanded in the Jain versions.

Jains consider some of the characters of the Mahābhārata and the Rāmāyaṇa to be mahā-puruṣas or śalākā-puruṣas – ‘great men’. In the Jain telling of the Rāmāyaṇa the protagonists are the mahā-puruṣas. However, the heroes in the Jain Mahābhārata, the Pāṇḍavas, are not classed as Jain great men. None of the Pāṇḍavas or Kauravas – their great enemies – is considered to be a great man.

Instead, the focus in the Jain Mahābhāratas is more on Kṛṣṇa, his brother Balarāma and their enemy Jarāsaṃdha. These characters are secondary to the main narrative of Vyāsa’s Hindu Mahābhārata.

These three types of great men are fated to fight each other in each half-cycle of time. The Prati-vāsudeva battles his mortal enemy the Vāsudeva, who is supported by his half-brother, the Baladeva. 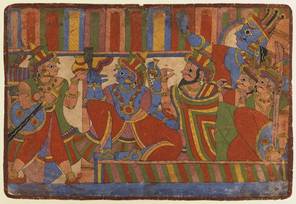 Kṛṣṇa and the PāṇḍavasImage by Gift of Doris and Ed Wiener, Brooklyn Museum © No known copyright restrictions 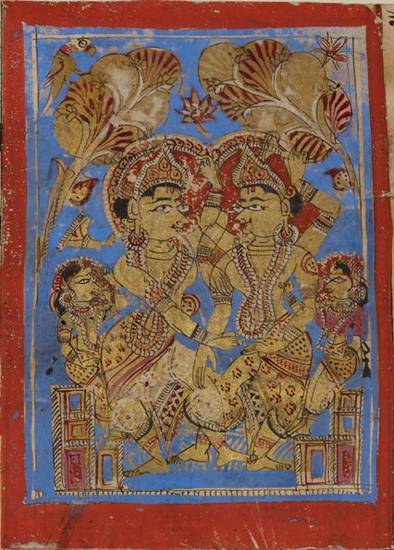 Prince Kṛṣṇa, born to Devakī and Prince Vasudeva in Mathurā, is prophesied to cause the death of his uncle, Kaṃsa. Therefore, immediately after his birth, Vasudeva and Kṛṣṇa’s elder half-brother Baladeva take him to a colony of herdsmen. There he grows up safely hidden from his uncle, who is intent on killing him.

After many years and adventures, he returns to Mathurā, kills Kaṃsa in a wrestling match and is reunited with his parents. Though the prophecy is fulfilled, there is no emphasis on this in the tale. This course of events is the same as in the Hindu version of Kṛṣṇa’s biography.

Soon thereafter Mathurā comes under attack from a neighbouring king, Jarāsaṃdha. Kṛṣṇa and his subjects flee to the west, towards the ocean, where they live in the new city of Dvāravatī, constructed by the gods. There Kṛṣṇa marries several queens and has many sons.

In due time, King Jarāsaṃdha wages war on Kṛṣṇa again. Six months later, the two monarchs agree to meet for a decisive battle, both gathering a vast number of allies. Kṛṣṇa kills Jarāsaṃdha in a duel.

Eventually, Dvāravatī is burned by a vengeful god, and only Kṛṣṇa and Baladeva escape. On their way south, Kṛṣṇa is killed by a hunter who mistakes him for a deer. 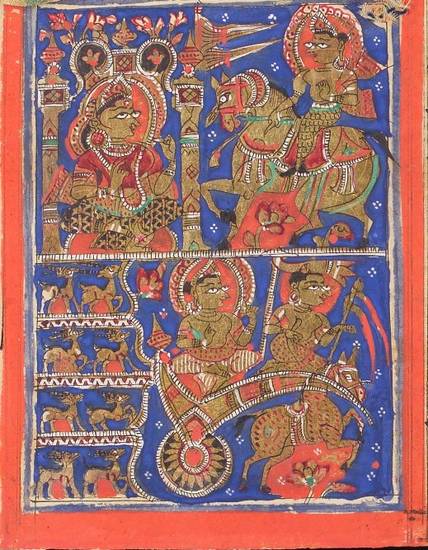 The boy who will become the 22nd Jina, Nemi or Ariṣṭanemi, is the son of Samudravijaya and younger cousin to Kṛṣṇa. Nemi grows up to become a man of unequalled power. Noticing this, Kṛṣṇa becomes worried for his own sovereignty. He arranges for Nemi to marry.

Just before the wedding, the young prince wanders around the park and is struck by the wailing animals which have been lined up to be slaughtered for his wedding banquet. Filled with disgust, he renounces the world.

The monk Nemi achieves omniscience and becomes a Jina. He roams the land preaching to his followers, including Kṛṣṇa and his other relatives, until he achieves final emancipation on Mount Girnar.

Pāṇḍava brothers and DraupadīImage by Vaticanus – Bob King © CC BY 2.0

One day in Dvāravatī, Kṛṣṇa receives a visit from five men, the Pāṇḍavas or sons of Pāṇḍu. Their rivalry with their 100 cousins, the Kauravas, has led to several attacks on their lives and years in exile.

The tale of the Pāṇḍavas’ adventures commences. When the eldest of the Pāṇḍavas is seduced into gambling away all their possessions in a game of dice, the five brothers spend years in exile in the forest. They then spend one year incognito at the court of King Virāṭa. They are accompanied throughout their exile by Draupadī, who, according to the Jains, is the wife of one Pāṇḍava brother, Arjuna. In Vyāsa’s Mahābhārata, Draupadī is considered the wife of all five brothers. After this period of exile, they all return to their ancestral city but again have to flee to avoid war.

When they arrive at Kṛṣṇa’s court in Dvāravatī, the brothers form an alliance with him and assist him in the fight against Jarāsaṃdha.

Narrative cycle of the Bṛhat-kathā

Aside from the epics and other religious stories, other more or less secular narrative cycles developed in India. One example is known as the Bṛhat-kathā – Great Story – first attributed to Guṇāḍhya. The original Bṛhat-kathā being lost, this narrative cycle survives in many later retellings, including some composed by Jains.

The Bṛhat-kathā centres on the adventures of a prince, Naravāhanadatta, who gains 26 wives. The Jains include this narrative cycle in their Mahābhārata. They ascribe Naravāhanadatta’s amorous adventures to Vasudeva, Kṛṣṇa’s father, before the birth of his sons. This part of the Jain Mahābhāratas is generally referred to as Vasudeva-hiṇḍi – Wanderings of Vasudeva. 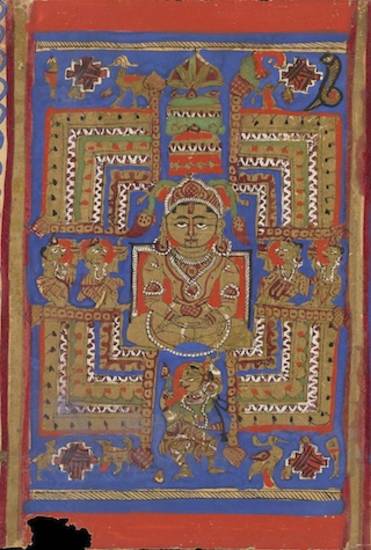 The first complete Jain Mahābhārata is the Harivaṃśa-purāṇa – Purāṇa of the Dynasty of Hari – which Jinasena Punnāṭa finished in 783. Its title clearly echoes the appendix of the Mahābhārata with the same name. In the Jain context it refers to the dynasty to which the main characters belong, the cousins:

A second title under which the Jain Mahābhāratas also often come is Biography of Nemi. An example is the Riṭṭhaṇemi-cariu by Svayambhū-deva, composed in the 9th to 10th century. Even though this title may give the impression of focusing on the life of Nemi, this is not the case. In fact, this Apabhraṃśa epic is the first Jain Mahābhārata proper. This is because the great majority of the composition deals with the story of the Pāṇḍavas and the Kauravas, and the great battle between them, dwarfing the other three topics. The choice of the name Biography of Nemi for this and other compositions is considered to be due to the relative higher status of Nemi, as a Jina, compared with Kṛṣṇa or the Pāṇḍavas. It does not indicate a particular emphasis in the composition.

From the 13th century onwards, a third title came to be used for the same narrative material. This is the Pāṇḍava-purāṇa or Pāṇḍava-carita. These versions tend to focus on the conflict between the Pāṇḍavas and the Kauravas, but still include the other three topics.

The 5th-century Vasudeva-hiṇḍi by Saṅghadāsa appears to be unique in its concentration on the Bṛhat-kathā material. It reduces the other three topics to subsidiary episodes to the main narrative of Vasudeva and his adventures.