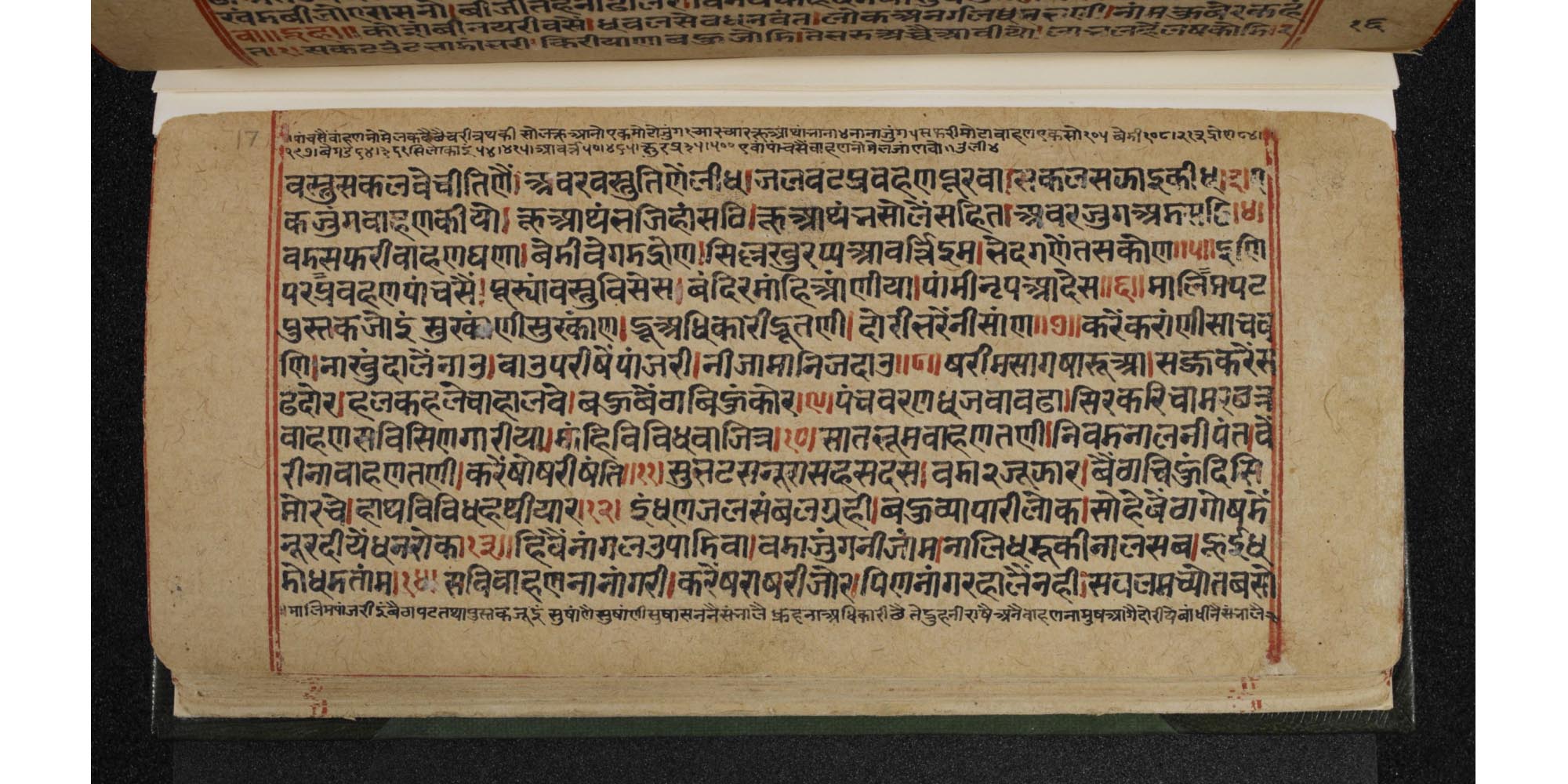 This manuscript recounts the story of Śrīpāla, one of the favourite heroes of Jain story literature. Many authors have told the story of his life since at least the 14th century. Vinaya-vijaya’s version in Gujarati dates back to the 17th century and stands among the most popular ones.

Śrīpāla was a prince, but at the beginning of the story he appears as a leper. He becomes the husband of Princess Madanasundarī or Maynasundarī, after she has told her father, King Prajāpāla, that one’s fate depends on one’s own karma alone. After the marriage and devout prayer, Śrīpāla is cured of leprosy. The couple go through many adventures. Among the various people they meet is a Jain monk who teaches them the benefits of the navapada or siddhacakra.

Parts of the tale

There are eight main stages of the story.

The tale opens with King Prajāpāla of Ujjayinī, who has two daughters, Surasundarī and Mayanāsundarī, whose modern name is Mainasundarī. One day he questions them on what they think is the source of their happiness. Surasundarī answers that she owes everything to her father. Mayanasundarī thinks everything, good or bad, is the result of karma. Happy with the first daughter, the king asks her to choose her husband. Angry with the other one, he marries her to the prince of lepers. Mayanasundarī happily accepts her fate. It turns out that the prince of lepers is none other than Śrīpāla, a prince. After his marriage, he is cured of leprosy. Moreover, the couple have been told by a Jain ascetic about the navapada. Mayanasundarī's father repents.

In the next stage Śrīpāla is dejected after hearing that he is only thought of as King Prajāpāla's son-in-law. In order to demonstrate his own value, he leaves his happy life and the town of Ujjayinī.

His first significant encounter is with a sādhaka. Śrīpāla gives him help by using a vidyā his religious teacher had given him and receives in exchange two magical herbs. One enables him to cross water while the other will protect him against weapons.

The sādhaka leads him to some alchemists, whom Śrīpāla helps to produce gold. In exchange, they give him some, although he is reluctant to accept it.

Śrīpāla arrives at Broach, where the merchant Dhavala is looking for a young foreign man to sacrifice to the goddess, so that his ships can set sail. His men try to catch Śrīpāla but in vain. Śrīpāla meditates on the navapada and makes the ship move, then sails away with Dhavala.

They all go to Ratnadvīpa, where they meet Jinadāsa, son of the śrāvaka Jinadeva. He asks Śrīpāla to open the door of the sanctum of the Ṛṣabhanātha temple in Ratnasancaya. In spite of all the townspeople’s efforts, the door remains closed. Jinadāsa also asks him to marry Madanamanjūṣā, the king's daughter. The prince goes there, meditates upon the navapada, opens the door and gets Madanamanjūṣā as a third wife.

The prince now decides to go back home but has to face the jealousy of Dhavala, who decides to kill him. During the voyage he manages to throw Śrīpāla into the sea. Śrīpāla meditates upon the Nine Entities – depicted in the navapada or siddhacakra – and lands on an alligator's back. In the meantime, Dhavala thinks of other stratagems to get the two princesses for himself, but fails.

The distinction between a good man, Śrīpāla, and a wicked one, Dhavala, is clearly drawn.

The story of Śrīpāla is closely connected with the navapada or siddhacakra. This is a fundamental religious symbol associated with the doctrine of karma. This teaches that all human beings hold their destiny in their own hands.